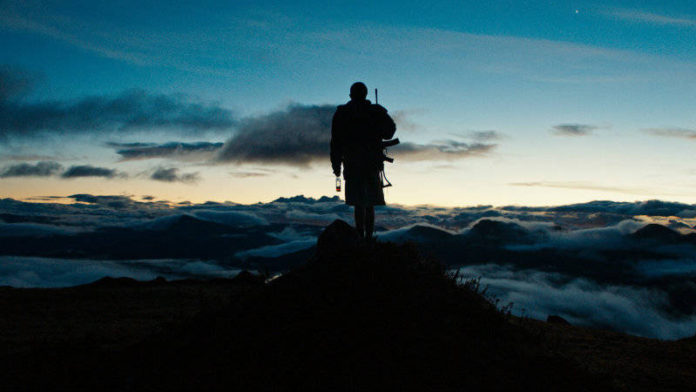 Monos is the third feature by Colombian film director Alejandro Landes and premiers in theaters August 15, taking audiences on a thrilling journey to the depths of human nature and the heartfelt tragedy of war children coming of age.

The movie begins on the aerie high altitude wetlands, the clouds above the mountain range stand as a backdrop to a squad of teenage guerrillas of The Organization. As yet another day in the ranks unfolds guarding a US hostage and safekeeping a Holstein cow, the fate of the rebels is about to change following the celebration of the union between Leidi, performed by Karen Quintero, and Lobo, the troop leader, played by Julian Giraldo. From that moment on, suspense unfolds.

Before being released in theaters across Colombia, Monos obtained international acclaim from critics and audiences alike. Up to now, the movie has won 15 awards, including the 2019 Sundance International Festival Special Jury Award and the 2019 Cartagena International Film Festival (FICCI) Audience Award. At the Newport Beach Festival Film in California, it won the 2019 Best Film, Best Direction, Best Cinematography and Best Actress awards.

Nonactors Sofia Buenaventura (Rambo) and reinserted guerrilla fighter Wilson Salazar (The Messenger) perform alongside Julianne Nicholson (Doctora), known for her role in August: Osage Country (2013), Black Mass (2015) and I, Tonya (2017). Also in the cast is Colombian-U.S actor Moises Arias (Big Foot), who played a role in Enders Game (2013) and The Kings of Summer (2013). Credible acting and a precise script by Landes and Argentinean writer Alexis Dos Santos add to the cinematic tension of Monos.

The cinematography of Jasper Wolf and underwater images of Peter Zuccarini along with the art direction of Ángela Leyton and Daniela Scheneider under the general direction of Alejandro Landes, capture emotion at its most raw, and transform the Colombian landscape into a lead character, vital to the storyline.

Avoiding common places or melodramatic scenes, the international team is able to portray the adversity the characters face with uncomfortable closeness, and, at times, even clinical and detached intimacy and brutal honesty.

As the plot unravels, the tension in the troop grows pushing each of them and the Doctora to their limits, and the tragedy of war emerges. Set in a fictional country very much like Colombia, where guerrilla warfare has torn society to the core, one cannot escape the familiarity of this country’s own tragedy where children are used by adult insurgents to fight their wars.

Even though Alejandro Landes explains that the movie stems from “an interest in telling my vision of the war in Colombia,” he warns he is not interested in generating a political debate. His idea is to take spectators to “a kind of void” and watch the movie setting aside “preconceived notions” and “ideology.”

For producer Santiago Zapata, Monos is not about the Colombian conflict. He assures, “this is a movie about coming of age in a context of war.” He believes audiences will inevitably associate the film with their own references, be it Vietnam, the Balkans or Colombia.

Monos was filmed over nine weeks in the natural reserve of Chingaza (4,000 m.a.s.l) and in the sweltering heat of the tropical forest of the Samaná River in Antioquia. The non-professional actors received acting lessons and military training to play their roles as members of the troop.

For Sofia Buenaventura, who likes to be called “Matt,” and won Best Actress in the Newport Beach Film Festival for her performance as Rambo, acting in the film has been the chance of a lifetime.

“One of the things I like about this character is that Rambo is not a boy or girl, just a teenager, an individual experiencing deep problems, and looking for a sense of belonging, and something to identify with and say, “I am,'” she explained.

Along with Rambo, Pata Grande, Leidi, Lobo, Pitufo, Sueca, Bum Bum and Perro share a sense of lost innocence when life in the troop stops being a game and becomes a gamble between life and death.