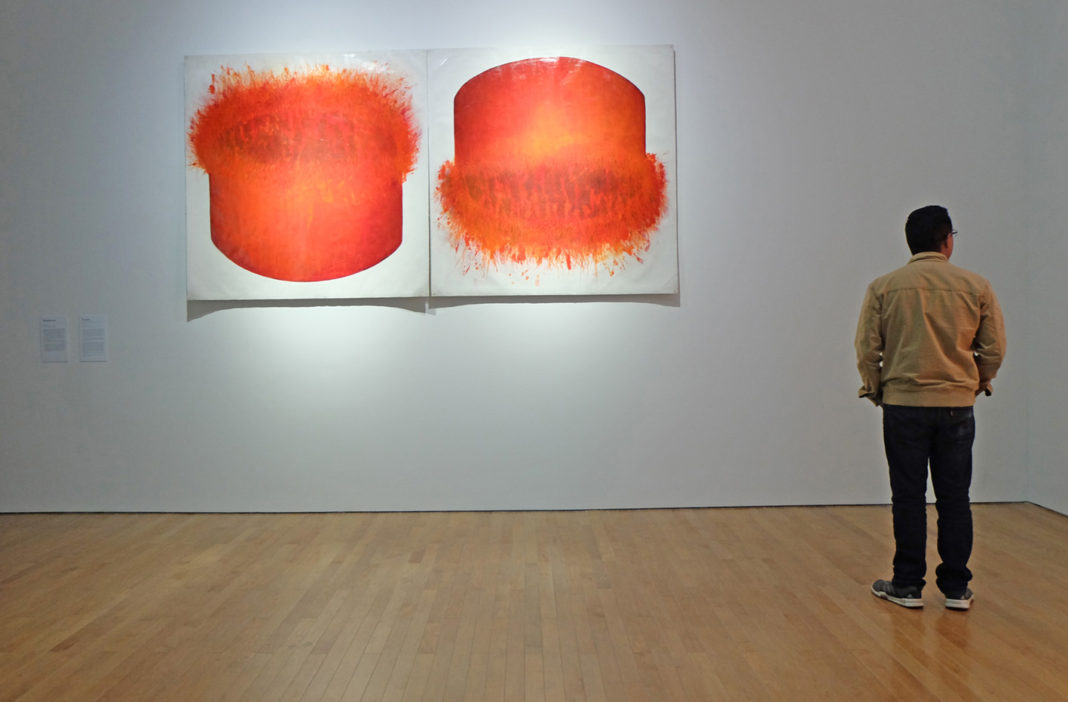 Three curators, Nimfa Bisbe of the Spanish bank La Caixa, Nydia Gutiérrez of the Museum of Antioquia and Nicolás Gómez of the Banco de la República, came up with a very reasonable proposition: to create an exhibition that looks at how art is the product of reason. This doesn’t mean that art cannot be irrational, spontaneous and a vent to madness. Take Picasso, Jean-Michel Basquiat and Pollock, as 20th century examples.

In fact, when reason and emotion meld, amazing works surface from the subconscious, 30 of which, are on display at the Miguel Urrutia Art Museum (MAMU) in historic La Candelaria. Called in Spanish El sueño de la razón (Dream of reason), this installation invited artists who have influenced plastic arts in their natives countries, including Canada, England, Germany, United States, Spain, Portugal, Argentina, Venezuela and Colombia.

Many of the artists in this curatorial undertaking have not been seen before in Colombia, such as Franz Erhard Walther. Walther, a German artist known for creating objects that people can manipulate to increase their awareness of time, space, and the human body continues to define various artistic disciplines from performance to human sculptures. The invited artists also span generations, from those who are building reputations to leading names of the art world. Among them, James Turrell, Richard Long, Rachel Whiteread, Rosemarie Trockel, Katharina Fritsch, Alan McCollun, Liliana Porter and Magdalena Fernández. In the Colombian line-up are Juan Fernando Herrán, Delcy Morelos, Juan Camilo Uribe and Andrés Ramírez. “This selection emphasizes the possibility of art as a shared language, from multiple contexts, and without the hierarchies attributed to geography,” claims curator Nicolás Gómez of Banco de la República.

In order to understand reason, however, the first important work to grace the second oor of MAMU is an engraving by the Spanish artist Francisco de Goya titled Los Caprichos. No stranger to the irrationality of his times – the Spanish Inquisition was burning heretics at the stake – Goya’s ominous image is a reflection of a dark vision of humanity, in which the dream of reason produces monsters and a critique of a society dominated by a powerful clergy and superstition. Goya’s etching inspired the title of the exposition.”The dream alludes to the utopias of modernity, not only to art but societies subject to a paradox of faith and reason,” says Gutiérrez.

The exhibition includes video installations, photographs, paintings, sculptures, and contemporary works that question the narrative of what it means to be modern from a societal perspective. The exhibition is divided in three rooms – Ghost of modernity, Geometry and body, Aesthetization of order – all of which allude to the central theme that art can be about structure and form. Ghost of modernity is the “technological room” with tiny screens projecting geometric shapes and a video installation that every time one walks past it, generates a sensation of passing through glowing Shinto gates. One work that stands out in this room is a striking sequence by Argentine conceptual artist Miguel Angel Ríos. In the most comprehensive of all rooms, Geometry and body exhibits Walther’s colored tapestry titled Wall Transformation Memory Base (Three Quotations), as well as the New York artist Allan McCollum’s Collection of Two Hundred and Sixteen Plaster Surrogates. Covering a white wall, McCollum’s Surrogates reveal this artist’s use of mass production in the artistic process.

Another intriguing work is a tower of garishly yellow plaster Madonna statuettes by one of the most celebrated sculptors in contemporary art, Katharina Fritsch. Fritsch explores history, mythology, and fairy tales of her native Germany in her installations, and draws subjects from everyday life, including household objects, common insects, body parts and religious iconography. Her work takes on many forms, from large-scale public sculpture to intimate sound pieces, and objects produced in limited editions.

Dream of reason at MAMU has curatorial depth and brings together artists who would otherwise not share wall space – all united by a study of logic, mathematics, geometry and production. It may not be the easiest exhibition to understand, by blurring boundaries between the ordinary and symbolic, but, nonetheless, it is attention-grabbing and an important cultural undertaking by a museum that challenges the way we understand art, within reason.

Víctor Gaviria returns to the slums of Medellín with ‘La Mujer...