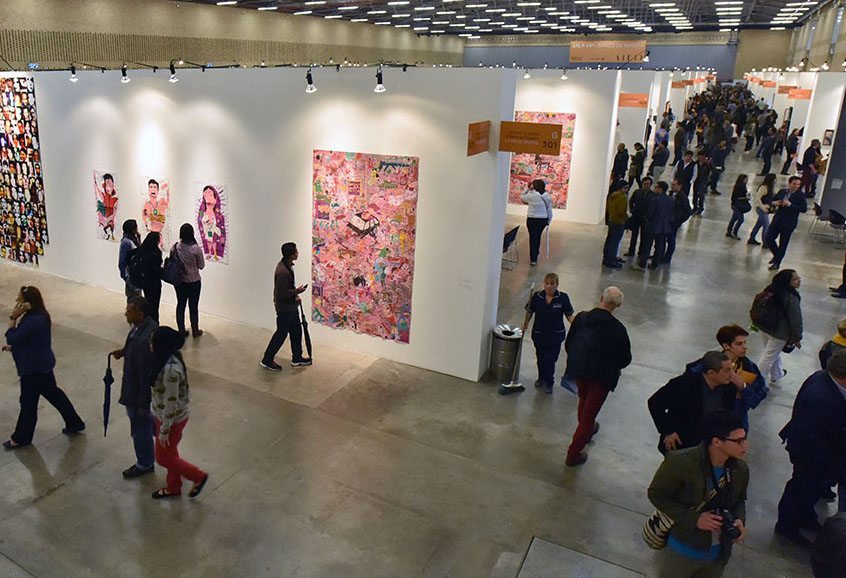 October is art month in Bogotá with one of the most important art fairs in Latin America opening its doors October 1. During the 11th edition of ARTBO, the pavilions of the Corferias Exhibition complex will be open for four days to visitors wanting to collect works of contemporary art from 84 galleries represented and 33 different cities around the world.

This year ARTBO looks to generate new proposals and projects relating to art in Colombia and will present works shown in galleries around the world. There is a special emphasis on young talent in the Artecámara section and an expanded area for art books and specialized art-related publications.

The Chamber of Commerce of Bogotá (CCB) organizes and oversees ARTBO. In just over a decade, the fair has established itself as one of the most sought-out in the Americas, not just for the amount of works exhibited – this year 3000 – but for the quality of the works selected.

Then you have the galleries which have been chosen by the official selection committee and represent Berlin, Buenos Aires, Sao Paulo, Havana, Santiago de Chile, Mexico City, Caracas, London, Bologna and New York.

The countries most represented at this year’s ARTBO are Argentina, Brazil, Colombia, Spain, United States and Peru.

The Proyectos category, curated by Manuela Moscoso and Catalina Lozano, selected 15 projects from artists represented commercially through a gallery and within the context of the theme “Fundirse con la luz, hacerse uno con el polvo” (Forged by the light and one with dust). These works reflect on the relationship between form and shape, and the individual within a social context.

Within ARTBO’s main exhibition space there’s the ‘Articularte’ section where interactive art works, including for the first time performance, and those which need to transcend the physical limitations of an exhibition space, will be presented. Call it the “happening” area and one which hopes to introduce children and visitors to the creative process.

In the new ‘Foro’ category, attendees can sit in on conferences and discussions by guest panelists on topics related to the evolving art scene.

To guarantee ARTBO’s global exposure, 400 industry professionals have been invited and 40 international journalists. The foreign delegation will visit Medellín and its Museum of Modern Art (MAMM), in order to get a perspective of Colombian art in the regions and tour a city of art “greats” such as Fernando Botero and Deborah Arango.

While other contemporary art fairs are geared only to the consumer, ARTBO takes pride in its curatorial process and for being able to present, under one roof, collections which are unique for both content and creativity.

The commercial aspect is important for any major exhibition, and ARTBO is no exception, yet as an event, its aim is to promote Bogotá as an “art capital” and encourage visitors to venture-off in order to enjoy other art dedicated events being held simultaneously, such as the Feria del Millón www.feriadelmillon.com.co and Odéon Fería de Arte Contemporáneo www.espacioodeon.com

The comprehensive range of galleries is matched by the projects of individual artists and the Artecamára programe of young talent in which 33 young artists will present works in four self-managed spaces. The focus is on the diversity of individual shows that give ARTBO a refreshing and innovative perspective to the more than 32,000 guests expected to attend this year.

You can visit ARTBO’s website www.artbo.co for a complete listing of galleriers and the artists represented, as well as follow the event on social media with the official #ARTBO2015 hashtag.

The admission ticket costs $35,000 for the general public and $15,000 for students. ARTBO opens 12pm to 8pm at Corferias (Cra. 37 No.24-67). Take note that the ticket office closes at 7pm and given the high demand for taxis, it’s best organize your schedule using public transportation or a car pool. Parking is readily available near the exhibition grounds for a flat fee.