It’s one of the largest art fairs in Europe and one of the most comprehensive when it comes to showcasing Latin American art. This year, the Madrid-based art fair ARCOmadrid opens its doors February 25th and for six days will host Colombia as guest country with 10 national galleries and their artists represented. Included in the invite category are Galería El Museo, Doce Cero Cero, Casas Reigner, LA Galeria, Nueveochenta and Valenzuela Klenner. Twenty young artists who have not had the opportunity to present their work outside Colombia will attend this 34th edition of ARCOmadrid, and an event organized by the Ma- drid Trade Fair IFEMA.

ARCOmadrid is Europe’s artistic gateway to South America, and one connected by a common visual language. This year, the ties with Colombia go deeper with the very active participation of this South American country in international art venues, and after the success of last year’s 10th edition of the ARTBO: the largest art fair in Colombia and one organized by Bogotá’s Chamber of Commerce (CCB).

As curators and professionals from the Europe’s art scene are able to appreciate Colombia ́s talent, one of the most prestigious cultural entities in this country – the art collection of the Banco de la República – was recently awarded by the ARCO Foundation their highest international award for any collection, and a distinction, which will be recognized during the fair’s opening night.

Founded in 1957, the collection of the Banco de la República houses 5,000 works by national and international artists, including Fernando Botero, Alejandro Obregon, Pablo Pi- casso, Andrés de Santa Maria, Doris Salcedo, Guillermo Wiedemann, and Jan Brueghel (the young). The foundation will also honor curator and art critic Eduardo Serrano for 50 years of work with the Banco de la República and his dedication in helping Colombian artists get recognized around the world. The Museo del Prado, within its programme “ invited work “ will exhibit in Spain the monstrance of the San ignacio church of bogotá, known as “La Lechuga” (the “lettuce”) due to it’s immense green emerald and which is part of the art collection of the Banco de la República. As a masterpiece of baroque religious art, this sacred object will be displayed in Madrid from March 3rd to May 31st to honour Colombia as the special guest nation of ARCOmadrid 2015.

Created by master goldsmith José Galaz during the time of Spain’s dominion over the new World and their industrious colony of new Granada, the monstrance took seven years to complete (1700 to 1707) and has 1485 emeralds encrusted in its gold encasing, as well as one sapphire, 13 rubies, 28 diamonds, and baroque pearls. it is considered one of the most valuable and most beautiful works of religious jewelry in Latin America and a legacy to a territory in which gold and emeralds were plentiful.

As the curtain rises on ARCOmadrid, Colombia’s dedication to the creative industries is being rewarded on the old continent. While there is plenty of work to be done in the future by opening up more global markets, everything seems to indicate that the country is living an important artistic moment. 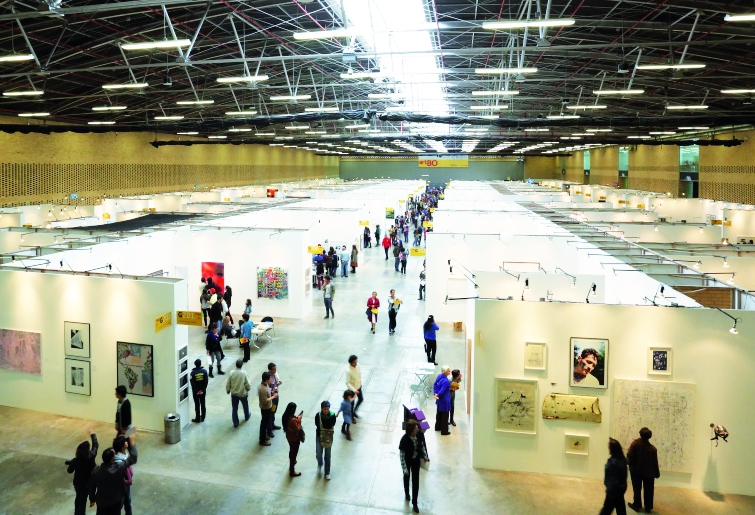