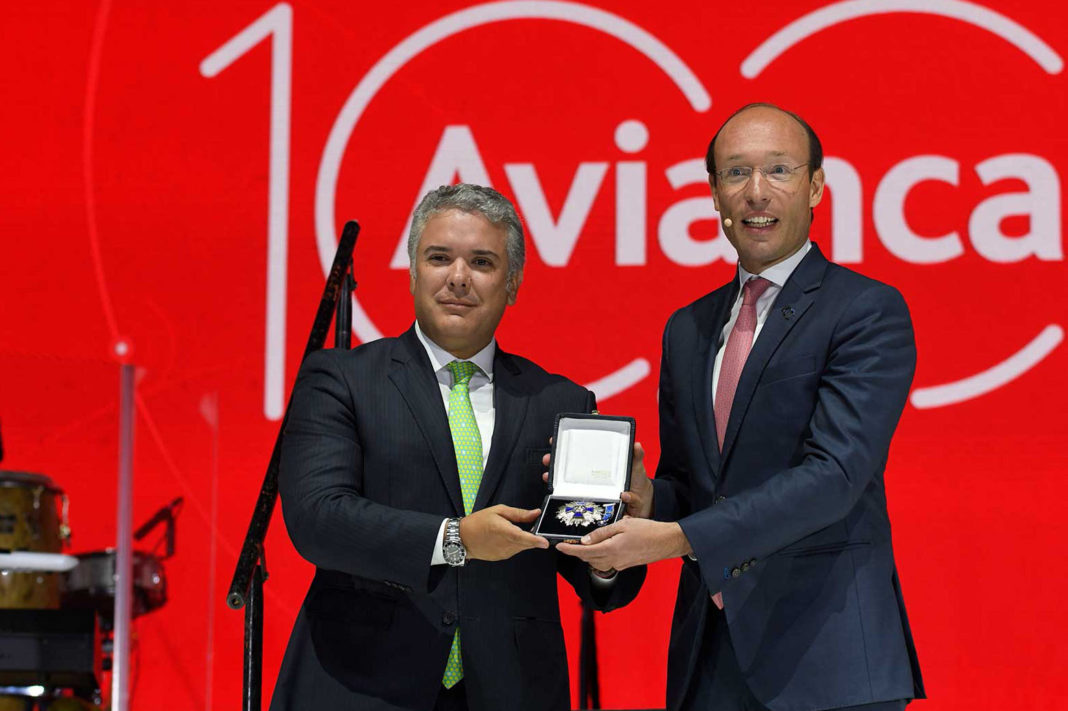 Airlines the world over are calling on governments for huge bailouts as planes remain grounded with coronavirus, closed borders and national lockdowns. Just months after Avianca hosted its 100-year celebration in a hangar of Bogotá’s El Dorado airport and with a performance by the iconic singer-songwriter Carlos Vives, the airline’s CEO Anko van der Werff could not have been more ebullient of the flagship’s next 100 years, confirming at a press conference allotment of US$250 million in equity from a New York-based investment bank “in case we require it,” as well as imminent launch of the carrier’s regional airline Avianca Express.

For Avianca Holdings the return to financial stability involved a shake-up of the board in 2019 ousting the company’s CEO Hernan Rincón for van Der Werff and securing an emergency loan of US$500 million to cover losses sustained by a prolonged pilot’s strike in the final months of 2017. Balancing the books of the world’s second-oldest airline also required replacing Avianca Holding’s largest shareholder Germán Efromovich with Robert Kreite of Kingsland Holdings as director, as well as slashing unprofitable routes throughout the Americas.

With the airline’s transformation heralded in January as “Avianca 2021,” last week the U.S. Securities and Exchange Commission announced that Avianca missed filing its 2019 annual report based on an assessment by independent auditor KPMG that the airline has outstanding debts as a result of suspended operations with coronavirus. The auditor concludes that the airline’s “ability to continue as a going concern.” Avianca said it would file the report in June to the SEC, the regulatory authority over the airline’s future given financial commitments between Avianca Holdings and United Airlines. The U.S carrier is hardly optimistic that Avianca will be able to salvage the strategic partnership as “significant investments in AVH and its affiliates, and the commercial relationships that we have with Avianca may not produce the returns or results we expect.”

While United Airlines received a US$5 billion bailout in federal government aid to save salaries and benefits for employees until October, Avianca is also requesting the Colombian government come to its rescue with an estimated package of US$1.2 billion (COP$4,8 billion pesos) even though the government sold its stake in the carrier to Brazilian businessman German Efromovich back in 2004.

Several of Avianca’s European competitors have received government aid to avoid bankruptcy protection, among them Lufthansa Group with US$10 billion and Air France-KLM (US$12 billion).

Despite Avianca being a Colombian carrier in namesake only, the company employs 11,000 in the country of a total of 21,000 and promotes the nation’s cultural and tourism identity around the world. One of the company’s corporate objectives for 2020 is greater connectivity between regional destinations serviced with Avianca Express’ fleet of 12 ATRS. Operations were scheduled to begin on March 30 connecting Medellín’s Olaya Herrera airport with Quibdó, Monteria and Bucaramanga.

In January, for the centennial celebration, Anko van der Werff confirmed that Avianca would launch directs flights from Bogotá to both Toronto (Canada) and Porto Alegre (Brazil) mid-year. Avianca currently has routes to three European cities – Munich, Madrid, Barcelona – and London in the UK.

Since the closure of all airports in Colombia on March 20 with the declaration of the National Health Emergency with COVID-19, several of Avianca’s widebodied aircraft have been adapted to transport medical supplies and have repatriated Colombians stranded overseas. Avianca Cargo remains operational as part of the global air relief effort with the pandemic.

Two months after President Iván Duque conferred the country’s highest honor on the airline, the Cruz de Boyacá, for having reached its historic milestone, Avianca’s van der Werff may have to hold the government accountable for saving “a company with a global vision, a company that wants to continue conquering borders,” as President Duque remarked at the ceremony. And as COVID-19 went from health emergency in China to epidemic within weeks, President Duque’s words now sound more prophetic. “In the last thirty years, more than 20 airlines have gone bankrupt worldwide and seeing Avianca last for a 100 years, reinvent itself and overcome the vicissitudes of such a competitive industry, must make us all feel we proud.”

There is simply too much at stake for Colombia to reactivate an economy with a grounded Avianca, and as days and weeks pass, the cost of salvaging this flagship increases exponentially. If the government does extend a low-interest lifeline to the airline – which it most likely will – the COVID-19 pandemic could well mark the demise of the United Airlines alliance and one that the airline’s first private owner, Efromovich of Synergy, strongly opposed. By consolidating a domestic base before embarking on future partnerships, Avianca will return to the skies a more downsized airline as 100-years is too much to lose in three months.

Colombians taking to the skies in record numbers