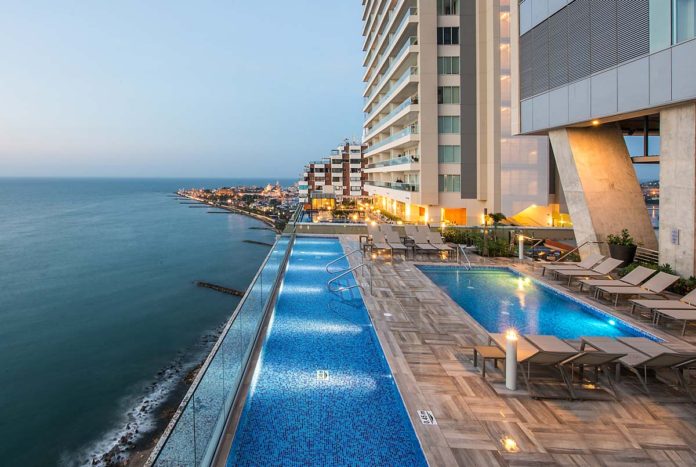 Hyatt Hotels Corporation has opened its first hotel in Cartagena with the launch of a $200 million luxury hotel in the Caribbean city’s Bocagrande district.

The launch comes amid a bid by the Chicago-based hotel chain, which has 679 properties in 54 countries, to expand operations around the world and just months after it announced it would build its first hotels in Pakistan and Croatia.

Hyatt’s bet is that Cartagena becomes a regional tourism and business hub. Tourism in South America has rapidly expanded in recent years, with more than 96 million foreign tourists visiting the region in 2015 — the highest figure in over a decade, according to an analysis by Spanish bank BBVA. Cartagena ranked as the sixth most-visited city on the continent.

When staying in the Heroic City, most visitors look at two options: the Old City with its boutique hotels or chain hotels that line Bocagrande beach, where numerous luxury properties have sprouted up in recent years. Several celebrities and world leaders have stayed in Bocagrande, including former U.S. President Barack Obama, who lodged at the Hilton Cartagena Hotel in 2012 during the Summit of the Americas.

Of course, there are other options such as a hostel in Getsemaní or renting an apartment in Los Morros, a condo complex that extends beyond the airport to La Boquilla, a small village home to local fishermen.

In 2014, Hyatt launched its first hotel in Colombia in Bogotá and is building another in Cali. The company has 11 hotels in Latin America and the Caribbean.

While Cartagena continues to be a magnet for large hotel projects, the Hilton Group announced recently that it has forged a management agreement with Bogotá’s exhibition center Corferias to operate a new hotel scheduled to open in 2018. The 414-room Hilton Bogotá Corferias expands the company’s presence in Colombia, where the chain currently has a portfolio of 13 hotels and 10 under development.

Despite more available rooms for travelers, and some 7,100 under construction, hotel occupancy in Colombia for December 2016 stood at 50.39%, a slight decrease of 2,48 percentage points compared to December 2015 when an occupation was reported as 52.87%.

In a January report, the Colombian Hotel and Hospitality Association (Cotelco) states that the resort city that most felt the decline in occupancy was Santa Marta, Magdalena, dropping 18.2 points from 2015 to 58.8% in December. During the recent holiday season, Cartagena also reported a modest drop of 4.18 percentage points to end the year at 57.6%.