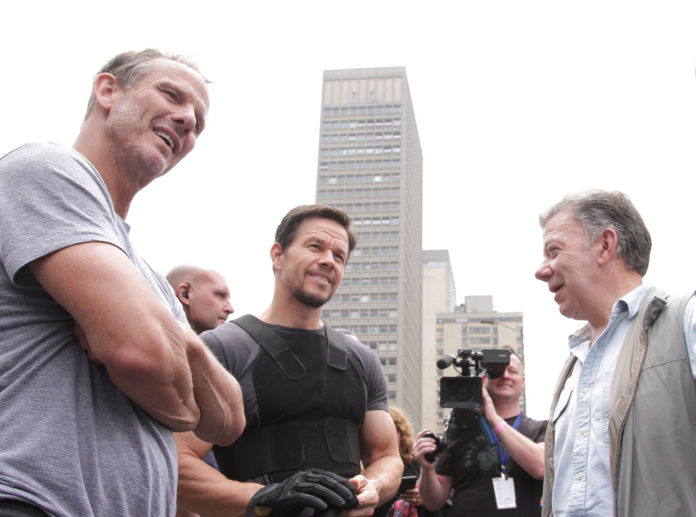 Colombian President Juan Manuel Santos may have a future as a cinematographer after turning up Sunday on the set “Mile 22” – a Peter Berg film currently being shot in Bogotá.

Joined by actor Mark Wahlberg and crew of “Mile 22,” Santos acknowledged the importance of having international film companies look to Colombia to produce content. “That Colombia becomes a good place to produce films is very important for us, it brings employment, it brings investment.”

The American director of Hollywood blockbusters Deepwater Horizon and Patriots Day among others, expressed his fascination with Colombia. “I feel at home, people have treated me like their family,” said Peter Berg. “We are fascinated to have found so much production value here, and to live this great experience. It’s one of the best experiences we have had.”

The big budget “Mile 22” is being shot in different locations across Bogotá, including the Centro Internacional Tequendama and a building that housed the former U.S Embassy near the Parque Nacional.

Mark Wahlberg also highlighted the quality of Colombians and promised to return to the country with his family. “I am very fascinated to be here. It is a beautiful place, beautiful, the experience has been wonderful,” said the Boston-born actor who has starred in several of Berg’s films.

“With all that we have lived so far, both at work and the mere fact of being here, the restaurants are fabulous, the people are very dear,” remarked Wahlberg, who was nominated in two Oscar categories for Best Supporting Actor in The Departed (2006), and co-producer of a Best Film, the American biographical sports drama, The Fighter (2010).

Peter Berg then handed President Santos the camera to shoot one of the action scenes of a film in which an elite American intelligence officer, aided by a top-secret tactical command unit, smuggle a mysterious police officer with sensitive information out of a country. The film also stars John Malkovich and Lauren Cohan.

After capturing a few seconds of an action scene, President Santos told the crew that four other films will use Colombia as a location in 2018. When hearing how the country is attracting some big names in the industry, Berg remarked: “I’m going back to Hollywood to say how wonderful Colombia is.”