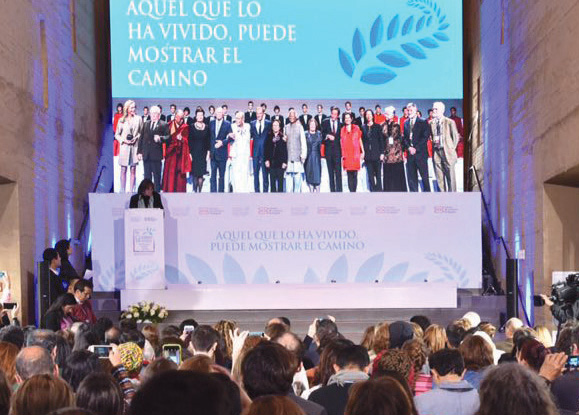 One month after voters narrowly rejected a peace accord between the government and Revolutionary Armed Forces of Colombia (FARC), business leaders, activists and conflict victims gathered at Bogotá’s Center for Memory, Peace and Reconciliation on Nov. 1 to launch the 16th World Summit of Nobel Peace Laureates, one of the most recognized peace-building meetings in the world.

The summit, which will be held from February 2 to 5, is expected to bring to Bogotá some 270 international media outlets, delegates from 150 international organizations and 20 Nobel Peace laureates, including Iranian social leader Shirin Ebadi and Yemeni activist Tawakkul Karman. It is the first time a Latin American city will host the event.

“The summit offers an opportunity to promote inclusive and participative dialogue that fosters the reflection needed to construct a reconciled society,” said Mónica de Greiff, president of Bogotá Chamber of Commerce, who campaigned for the city to host the event.

The announcement of the summit comes as Colombia’s peace process faces an uncertain future. President Juan Manuel Santos has been scrambling to revive the four-year-long peace talks with the FARC after voters shot down a proposed peace deal with the country’s largest rebel group in a plebiscite.

Five days after the shocking results, Santos won the Nobel Peace Prize for his efforts to end the 52-war with the FARC.

“I invite everyone to join our strength, our minds and our hearts in this great national endeavor so that we can win the most important prize of all: peace in Colombia,” Santos said on October 7 during his first public appearance since winning the award.

Since then, peace talks with the National Liberation Army (ELN) have unraveled. On October 27, Santos postponed the talks until the group frees a politician that has been held hostage since April. The formal talks were slated to start on November 3.

Santos had previously suspended negotiations with the group in May after the high-profile kidnapping of Spanish journalist Salud Hernández-Mora. But he remains optimistic about reaching what he has called “a complete peace”— peace deals with both rebel groups.

For its part, Colombia will “receive enormous benefits” from hosting the summit, said Ekaterina Zagladina, the president of the Secretariat of the World Summit of Nobel Peace Laureates. The event is designed to promote world peace and includes forums and panel discussions.

“To be successful, the summit has to revolve around ordinary people, and not the other way around,” said Virgelina Chará, a displaced community leader from Cauca and founder of Asomujer y Trabajo, an organization that helps displaced families.

The armed conflict has killed 260,000 people and displaced seven million since the 1960s.

“Sixteen of every 100 Colombians are victims of the conflict,” said Paola Gaviria, Colombia’s presidential counsel on human rights. “What happened to the victims happened to all of us. It is part of our history.”