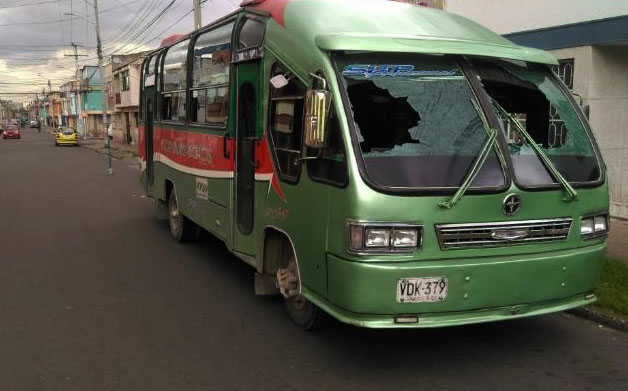 Bogotá is enduring another transport strike Monday, called by the Unión de Conductores (Drivers’ Union) in protest over the suspension of licenses by the District Mobility Secretariat. Joining the national strike are truckers and inter-municipal bus drivers. According to strike organizer Hernando Chávez, commuters can expect delays and road blockages across the capital, and warned vehicle owners of “consequences” should they take to the streets.  The District Mobility Secretariat has suspended so far this year some 30,000 licenses of which 350 are indefinite. For Chávez, the strike is also a protest over “continued persecution by the authorities against the transportation sector.”

As of early morning, the protest was largely affecting the roads in the municipality of Soacha, neighborhoods in the south of Bogotá and locality of Kennedy. The mobility on the road to La Calera at the height of Km.4 has also been impacted by a small group of protestors. District Mobility Secretariat Juan Pablo Bocarejo is expected to give an update on the situation in the capital at midday. Several cases of vandalism against SITP (Integrated Public Transport System) buses have been confirmed by the metropolitan police.  Commuters are advised to exercise caution and avoid, if possible, the rush hour.

Argentina guest nation as FILBO 31 prepares to open in Bogotá