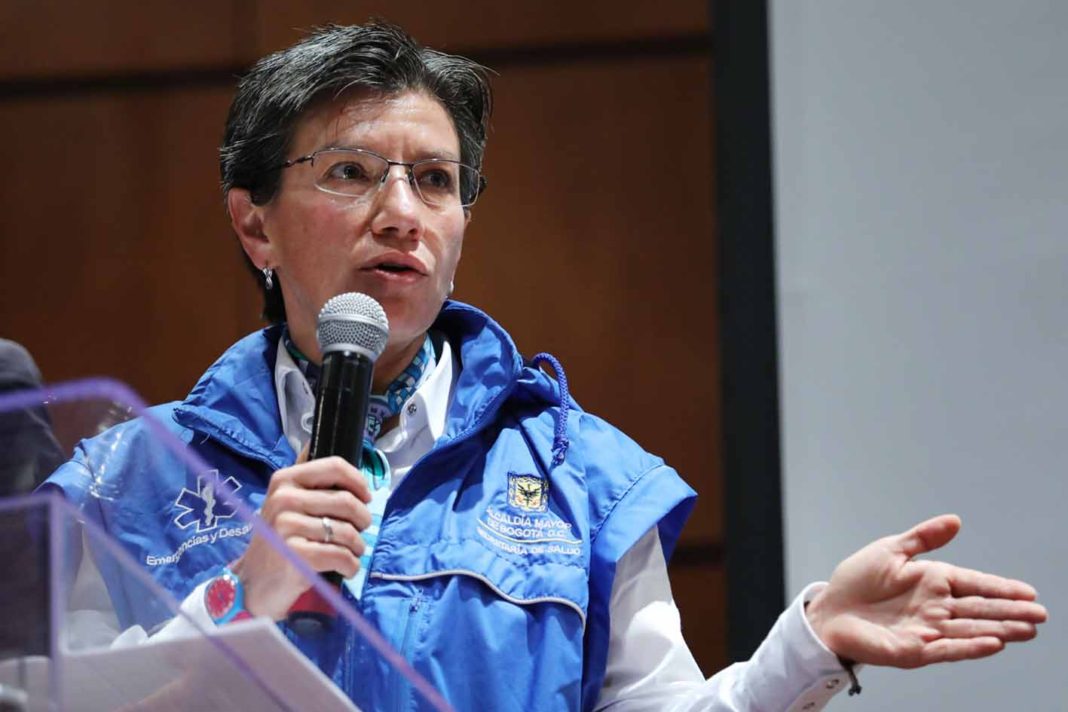 In a press conference on Friday – streamed on Facebook Live – Bogotá Mayor Claudia López announced major achievements during the two-month quarantine for Colombia’s capital city and new measures as 2.6 million workers are expected to resume their responsibilities as of Monday, May 11.

Wearing a facemask while accompanied by the district’s Secretariats for Women, Health and Security, Mayor López delivered to a virtual audience an emphatic and empathetic address in line with the national government’s objective “to re-open the door of Bogotá” gradually.

Thanking Bogotanos for enduing the #CuarentenaPorLaVida and admitting that lockdown “has been a very difficult sacrifice,” López began demonstrating with the aid of charts the epidemiological track of coronavirus in the city since the first case was detected on March 6, highlighting accomplishments to protect citizens after the contagion entered the city through El Dorado Airport and spread to all localities. According to the Mayor, had the quarantine not been enacted on March 20, in Bogotá an estimated 7,000 lives would have been lost to coronavirus.

Mayor López stressed that “80% of Bogotanos do not believe that they will get infected. “This is false, the complete opposite is true,” she said before recommending residents to act and believe they have the virus. “The greatest crime one can now commit is not wearing a facemask,” she said. “This is not a favor, it’s an obligation.”

As of Friday, the total death toll for the city stood at 131.

López also confirmed that while Bogotá had 100% of the country’s total number of infected in early March, the current 3,824 infections now represent 38% and significant drop as outbreaks impact the departmental capitals of Leticia and Barranquilla. The Mayor also remarked that the temporary hospital inside Corferias exhibition grounds has low-to-intermediate risk patients receiving treatment for non-COVID-19 illnesses.

Intensive care capacity in 565 ICU rooms of the city averaged between 30% and 35% during April.

Medical experts predict that seven out every 10 Bogotanos will get coronavirus and out of every 100 infected, one person will die.

López also explained progress with the infection rate in the city lowering from 3% to 1.1% and encouraging numbers below most world capitals, especially those of Latin America.

In terms of PCR testing, Bogotá is proceeding with an average of 2,500 tests per day with results confirmed within 48 hours. López said that the capital has 200,000 test kits available to treat symptomatic individuals and that the virus was becoming “less intense, but more concentrated.”

As a result of rising cases of infection in Kennedy, the locality has been placed under an Orange Alert for the next two weeks and enforced by harsh stay-at-home restrictions.

“I am very proud and grateful of Bogotá,” stated López. “The sacrifice was worth it.”

Here, some of the changes that take effect Monday, May 11.

1. The gender-based mobility restriction Pico y Género will be lifted.

2. Facemasks are obligatory outdoors and those stopped by the National Police without one will “face a heavy fine.”

3. The license-plate restriction Pico y Placa goes back into effect, and cars will only be able to transport a maximum 3 persons (including the driver) for errands – exempted by Decree 457 – to supermarkets, banks and notaries.

4. The maximum speed limit in the city will be 50 km per/hour.

5. TransMilenio will only receive up to 35% of its passenger load factor (2.2 million) and use of the integrated system is only permitted for public officials, district workers and healthcare providers from 6:00 am to 9:00 am.

6. Social distancing of at least 2 meters is obligatory in all public spaces.

The construction sector can operate between 10 am and 7 pm based on shifts and projects pre-cleared by the district based on bio-protocol standards.

The manufacturing sector can operate between 10 am and 5 pm, but each company can establish its own schedule including evening shifts.

Commercial establishments can only open between 12 pm to midnight.