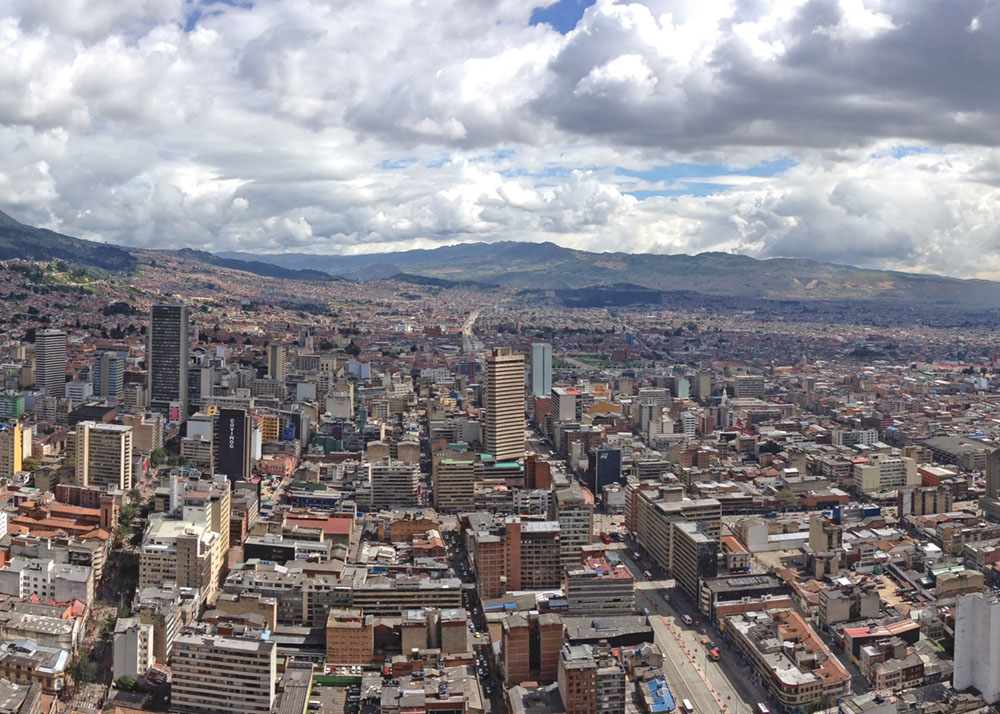 I give up smoking and take up the supposedly healthy activity of cycling, only to find myself puffing up a Bogotá hill while gulping down the thick warm fumes from an old bus. Then, I read somewhere that mega-city citizens of Latin America inhale enough smoke particles to equal two cigarettes per day. So much for cutting down.

The more I read, the more I realise that air pollution is a tricky subject, not only because much of it is invisible (though Bogotá’s buses chimeneas – chimney-stack buses – are a handy visual reminder), but because worldwide contamination goal-posts are constantly in flux.

Diesel cars were touted as clean and green until a scandal of emissions fraud, in which car manufacturers found the easiest way to meet U.S. standards was to design cars with built-in gadgets to cheat tests.

These scandals didn’t resonate much in Colombia, though, perhaps because nearly all cars are petrol, but also because owners of larger diesel vehicles have a more straightforward way to beat pollution tests: threats and bribery.

If you find yourself on Bogotá’s streets, you quickly adopt a local habit of pulling parts of clothing over your face as a smoky truck chugs by. Can a thin layer of cloth though, protect you from a mix of carbon monoxide, nitrogen dioxide, sulphur dioxide, ozone and microscopic soot particles? I doubt it.

Official statistics are hardly reassuring. Bogotá is Colombia’s second most air-polluted city, after Medellín, and the 10th worst in Latin America.

Vehicles are not the only air polluters, with factories and mining account- ing for a third of the city’s contamination. Given that large trucks and buses tend to concentrate in industrial areas, it is hardly surprising that Bogotá’s smog hotspots are Kennedy and Ciudad Bolivar in the southwest, and to no surprise, also the poorest ‘lower strata’ parts with less green spaces and more streets clogged with older cars.

So how bad is it? Fairly bad. There are many measures for air pollutants, but one of the most telling is ‘PM2.5’, or small lumps of smog 2.5 micro-meters or smaller (think 30 times finer than a human hair). These cause the haze you can see over a city, asthma, heart-attacks, lung disease. They even swim around in your blood stream. Most come from vehicles.

Parts of southwest Bogotá record an annual average of 30 micro-grams of PM2.5 particles per square meter of air, three times levels recommended by the World Health Organisation. This sounds bad enough, but in peak hours – when most vehicles and humans are on the street – the levels can peak at over 80.

“his creates an environmental disaster” states the Bogotá-based doctor Gon- zalo Díaz, who has dedicated 20 years to monitoring the health impact of poor air in the city. He quotes statistics from the WHO in which man-made air pollution kills 12 million worldwide every year and, has increased mortality in Bogotá by 14%. Some 600,000 children under the age of five are treated for respiratory problems annually and number one cause of infant deaths in the capital.

“Everyone in Bogotá breathes air that is contaminated, poisonous and carcinogenic, no matter where they live,” said Díaz, aiming much of his ire at the city’s network of diesel buses, the “smoky Volvos” of the SITP mass-transit systems, and the corrupt system of vehicle emission tests.

The doctor blames authorities of falsifying air quality data: on the smoggiest days when social media is all a-Twitter over the bad air, he says, the real-time data streams of AQIs (Air Quality Indices) suddenly freeze then re-appear later as ‘normal’.

These claims put Díaz at odds with the official reports that Bogotá’s air quality is slowly improving. But, that may be hard to prove, as ways of measuring and what types of contaminant to measure, also change over time.

Colombia has adopted a lower standard for clean air measurement recommended by the WHO’s Ambient Air Quality Guidelines. In Bogotá, a “good” annual air average is 25 micro-gm/m3 of PM2.5 particles, more than twice as dirty as the recommended 10 micro-gm/m3 of the WHO.

So, who measures our air? In Bogotá, the office of the District Environment Secretary operates 13 air testing stations in a network called RMCAB (Red de Monitoreo de Calidad del Aire de Bogotá). Data is fed in real-time to an interactive map and forms the basis of three-monthly and annual reports.

These feeds also record climate data, bearing in mind that levels of air pollution also depend on factors such as wind, rain and temperature. In this sense, Bogotá is somewhat blessed sitting on an open plain with almost constant wind flow to disperse the air, particularly compared to Medellín where the enclosing hills create Colombia’s worst fog and occasional health emergencies.

One downside of the capital, from a pollution perspective, is the high altitude of 2,600 meters that makes fuel combustion less efficient, and exacerbated by chimney-stack buses and trucks running on poor maintenance and lack of exhaust filters.

Research shows that in any given city, 25% of the vehicles cause 90% of the pollution. According to the Secretaría de Ambiente, 43% of Bogotá’s air pollution comes from trucks, 23% buses (including SITP and TM buses) and 14% other diesels.

The irony is that our mass transit system is slowly killing us, and as to be expected, city authorities have always have a “plan” in the pipeline, but not much action.

For SITP and colectivos there’s a mobile exhaust emission testing team and a “smoky bus” hotline where the general public can make a formal complaint. Apparently, transit authorities “follow the vehicle and test its emissions,” clarified a spokesperson from the Secretaría. But few chimney-stack buses are ever caught because “citizens don’t know how to denounce.”

As for TransMilenio – which you might imagine is under tighter control – the scenario is just as bleak. Various city mayors regularly battle with the fleet owners to replace old stock and limit a bus’ mileage, but the owners fight back and continue to squeeze as much profit from the system as they can. This year, the city caved in again and allowed buses to keep rolling on to 1,500,000 kilometers. That is to the moon. And back. Twice.

There are some silver linings: Colombia’s Congress has forced fuel suppliers to massively reduce sulphur content. And despite still-critical levels of air pollution with 3,000 related deaths last year – Medellín is managing reductions with its electric Metro, cable-cars and a plan for electric taxis.

But, perhaps for inspiration, Bogotá needs to look at Quito. While still far from perfect, the Ecuadorian capital –topographically similar to Bogotá – has joined the top 10 clean-air cities in Latin America. One reason for this is its uncompromising approach to smoky buses. Living there some years back, I remember police stopping buses for on-spot emission testing, then towing them away under armed guard when it failed. Of course as passengers we weren’t pleased to be stranded by the roadside but, looking back, maybe it was the right approach. Couldn’t Bogotá do the same?