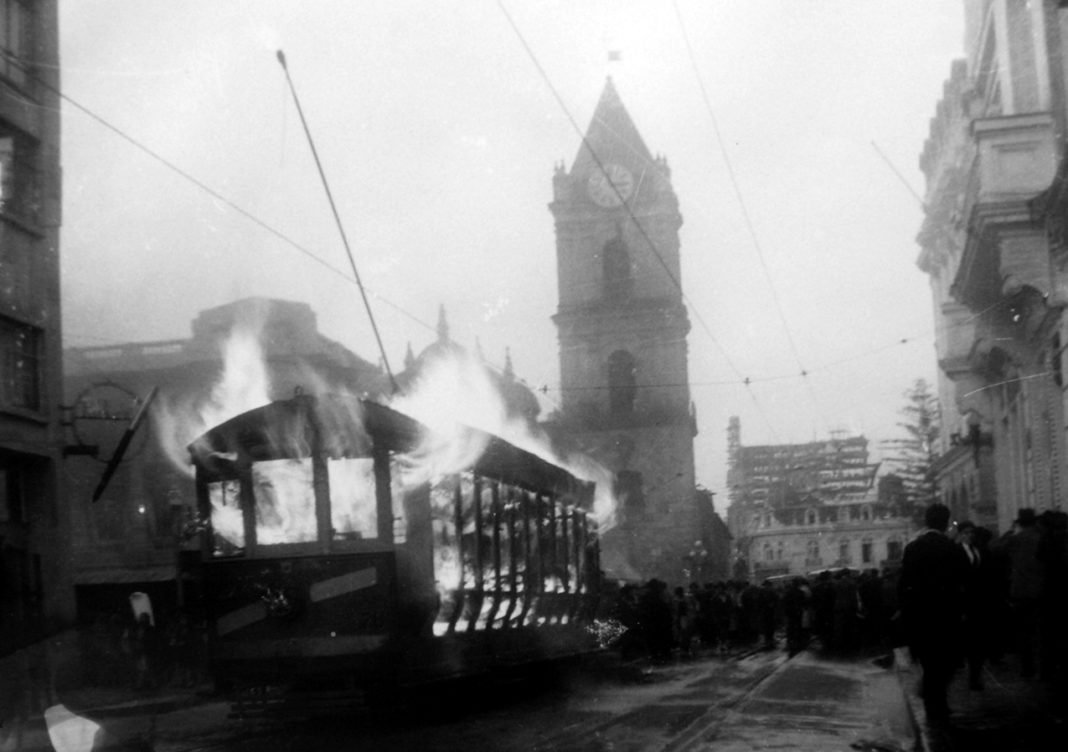 Many Colombians still remember exactly where they were on April 9th, 1948, a date that obliterated much of the capital Bogotá as they knew it. The so-called Bogotazo erupted hours after a radio bulletin announced that populist Liberal leader Jorge Eliécer Gaitán had been gunned down at the heart of the city – the Avenida Jiménez with the Carrera Séptima.

Bogotá in 1948 was a divided city where political tensions ran deep. The working classes were angry at their lack of representation in government with the two, deeply rooted Liberal and Conservative parties power sharing in the interests of the elite. The ultramarinos– Super Blues – supported Conservative President Mariano Ospina Pérez, and the opposition Liberals, identified by the color red, had their own strongman, Carlos Lleras Restrepo.

But Jorge Eliécer Gaitán was also a Liberal; except that he was born on the wrong side of the tracks, which in those days was the neighborhood of Las Cruces. After stepping out of his office for lunch, Roa Sierra pulled the trigger at arms length on Gaitán. Reaction on the street corner was immediate and violent. Even though there are no public records as to how many people were killed in the aftermath of the assassination, the carnage and destruction of the city was absolute. The street cars of Bogotá, operated by Ferrocarril Central del Norte, were set ablaze by an angry mob. Shops looted and fires burned out of control for days. Frenzied crowds even stormed the city’s largest hardware store, Ferreteria Berrio, to steal machetes and marched towards the centro looking for revenge.

Bogotá never recovered from the Bogotazo and historian Jorge Orlando Melo writes about “the permanence of collective representations of the 9 of April and of Gaitán” in the Colombian psyche. Even though the Bogotazo is a bloody moment indelibly inked on the capital’s consciousness, it unleashed decades of violence with the period known as La Violencia.

This year marks the 70th anniversary of the assassination of Gaitán and to commemorate this momentous day in Colombian history, novelist Miguel Torres and the Ministry of Culture produced a play called Crime of the Century. The play will be presented from April 17 to 29 at the Teatro Colón.

The work narrates the life of Roa Sierra, Gaitán’s assassin, who was obsessed with the leader. Roa Sierra was a poor, mostly unemployed man with no deep political affiliations, according to the official investigation into Gaitán’s death, that lasted 25 years and never revealed a conclusive motive. The young assassin was butchered by an angry mob on the same day he committed the crime, and even though he was described as a “lazy dreamer,” the 27-year old stonemason from barrio Egipto did suffer from mental health problems, to the severity that he was convinced he was a reincarnation of Bogotá’s founder Gonzalo Jimenéz de Quesada, and one of the founding fathers of the Republic, General Francisco de Paula Santander.

According to Manuel José Álvarez, director of the Colón Theatre, the Nueve de Abril “split Colombia’s history in two and generated a climate of violence from which we have not been able to escape.” This responsibility to a collective history motivated Torres to adapt his book to the stage and the novelist remarked that there isn’t a single theatre production of Gaitán’s final day, nor one of Roa’s psychological state that fateful Friday.”With the help of a top-notch cast and support of the Ministry of Culture, I decided to take on the challenge,” said Torres. “I realized that Nueve de Abril has become a tragic date for Colombians, instead of remembering how important Gaitán was for all of us. I want to pay homage to one of the most honest and visionary leaders in history of Colombia.”

As a major theatrical production for this iconic theatre, Crime of the Century brings to stage the mood at end of an era. And as The City Paper’s very first newspaper rolled-off the printing press on April 9, 2008, we believe that Nueve de Abril is not only a very symbolic date, but one at the heart of news.