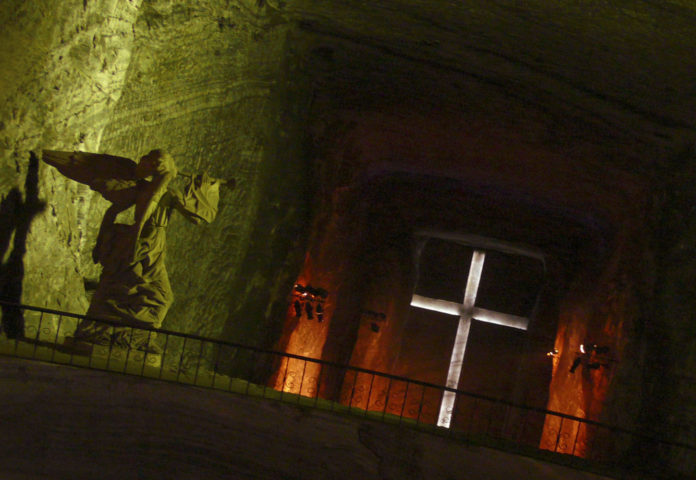 In the several years leading up to my move to Bogotá, I lived mostly in places most Bogotanos would consider stiflingly small. My hometown has a population of less than 50,000. I know a church that size in Bogotá. I went to university in the middle of “nowhere,” at an institution with a student community that in itself, was a small community. So maybe my small-town background is why the town of Zipaquirá felt familiar, even though I had never been there. It’s a charming place, not far from Bogotá, about 45 minutes by bus from Portal Norte Transmilenio station. Here are some things I would suggest checking out while there:

La Cathedral de Sal is the most famous attraction in “Zipa,” by which the city is affectionately known. The miners who excavated the salt mines underneath Zipa could think of no better way to use the space than to make it into a chapel. Be patient as you visit; you may tire soon of the nearly indistinguishable Stations of the Cross monuments, but the sanctuary below is truly something to behold. It’s illuminated by colored lights and is equipped with about everything a chapel needs, including a closet for priestly vestments (but not including easy accessibility; the tunnels are neither smooth nor well-lit, so be careful).

Nobel Prize-winning novelist Gabriel García Márquez wasn’t born in Zipa; he was born in Aracataca. He didn’t get his start as a journalist there; he did that in Bogotá. But Zipa is where he completed his high school studies, which some say are the best years of one’s life. (Having completed high school and moved on to other parts of my life, I disagree, as would Gabo, I’m sure.) Gabo received a scholarship to the Liceo Nacional de Varones in Zipaquirá and was a boarding student there until he graduated in 1946. It was in a classroom that he was first inspired by the world of literature and began to write his own works. The building is still an operating school with over 1,600 students, but it’s also a cultural center and museum to Gabo that is free to enter. The guide speaks both English and Spanish. You can walk throughout the school and see event spaces, the dormitory where Gabo slept, and even a fun statue of him sitting at a desk.

The archeological museum of Zipaquirá isn’t terribly large, but it compensates by stuffing nearly every type of pre-Columbian artifact one could imagine into its limited space. Plates, vases, toys, decorations, religious symbols – it’s all here. The descriptions of the objects’ uses are brief but informative. The cost to enter is $5,000 pesos – less than US$2. This museum is a perfect way to learn a lot about pre-Columbian culture for a relatively low investment of both money and time.

You may recognize a picture of the Catedral Diocesana. If you Google the word “Zipaquirá” you will get either an image of La Catedral de Sal or La Catedral Diocesana. This cathedral is not only an iconic photo opportunity but also a historic landmark. It took over 100 years to complete and was finally finished in 1916. In the same plaza, Plaza de los Comuneros, is the beautiful Palacio Municipal, where the town government has its main office. Unlike the cathedral, you can’t enter the Palacio, but its buttery yellow exterior and red roofs do make for some lovely photos.