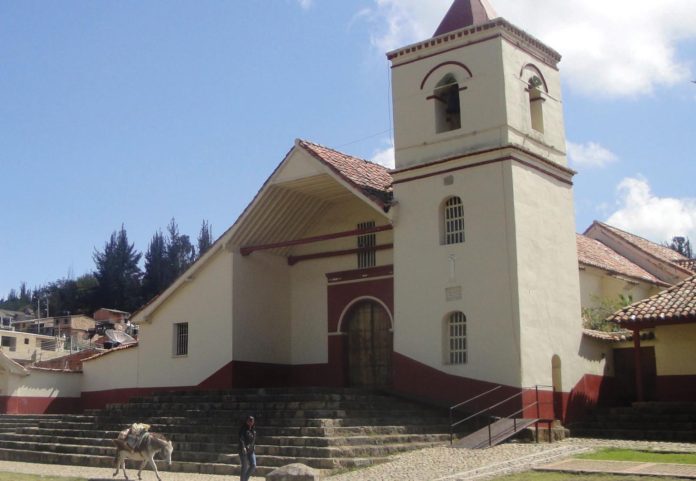 The rocks wobbled under my feet. Just a few steps to the right, a steep precipice overlooked stone cottages and grazing cattle more than 300 metres below. The tang of eucalyptus swirls through the mountain air.

We were approaching the summit of an 400-high metre mountain on the outskirts of Sutatausa, a coal-mining town 80 kilometers north of Bogotá. The mountain and its rocky path guard a forgotten chapter of Colombia’s colonial history—the site of an ancient massacre.

“In 1541, the Spanish forced over 5,000 Muisca people up this very same path,” says our guide, Bernal. “When they got to the top, almost all of the Muiscas threw themselves over the precipice. Those who didn’t jump had their noses, feet and hands cut off or were burned alive. It was one of the largest indigenous massacres in Colombia’s history.”

Now, 475 years later, tourism is on the rise, and the path has been converted into a hiking trail that leads to rock climbing, rappelling and mountain biking sites.

Hotels have sprouted up on vacant lots including high-end boutique lodging like the idyllic Casa Yunque.

Cheese and yogurt stalls line the highway with merchants hoping to use the reputation of the nearby town, Ubaté, also known as the “dairy capital of Colombia.”

But the area has struggled to compete with more established tourist destinations like Villa de Leyva or Zipaquirá’s salt cathedral for lack of infrastructure. Some of the area’s roads are in disrepair and many locals refuse to work on weekends, the peak time for tourism. “Ubaté is the dairy capital, but we haven’t been able to take advantage of that,” Bernal said.

Sutatausa, which means “small tribute” in Muisca, offers a unique perspective on Spanish colonization. A plaque on the town square memorializes the victims of the colonial massacre. The town’s cathedral houses rare 400-year-old murals that depict Muisca leaders alongside Catholic saints. A hidden subterranean chamber behind the pulpit has a wooden torture rack that dates back to the Inquisition.

But Bernal said the recent uptick in tourism is for an entirely different reason. “People have been coming to hunt the chupacabras,” he said.

The chupacabras, or goat-sucker, is a mysterious creature that bites and drains the blood of small animals. At least 100 animals in the area have fallen victim to the chupacabras in the past six months.

So far nobody has spotted the elusive predator, and the animal doesn’t appear to pose any risk for hikers.

At the mountain’s summit, coal miners whose shift had just ended at a nearby mine, greeted us well as they passed by, their faces drenched in soot.

The miners were apparently used to the beautiful view for they didn’t look twice. And as the majestic folds of the Andes spread out before us—it was well worth the one-hour hike and two-hour trip from Bogotá.