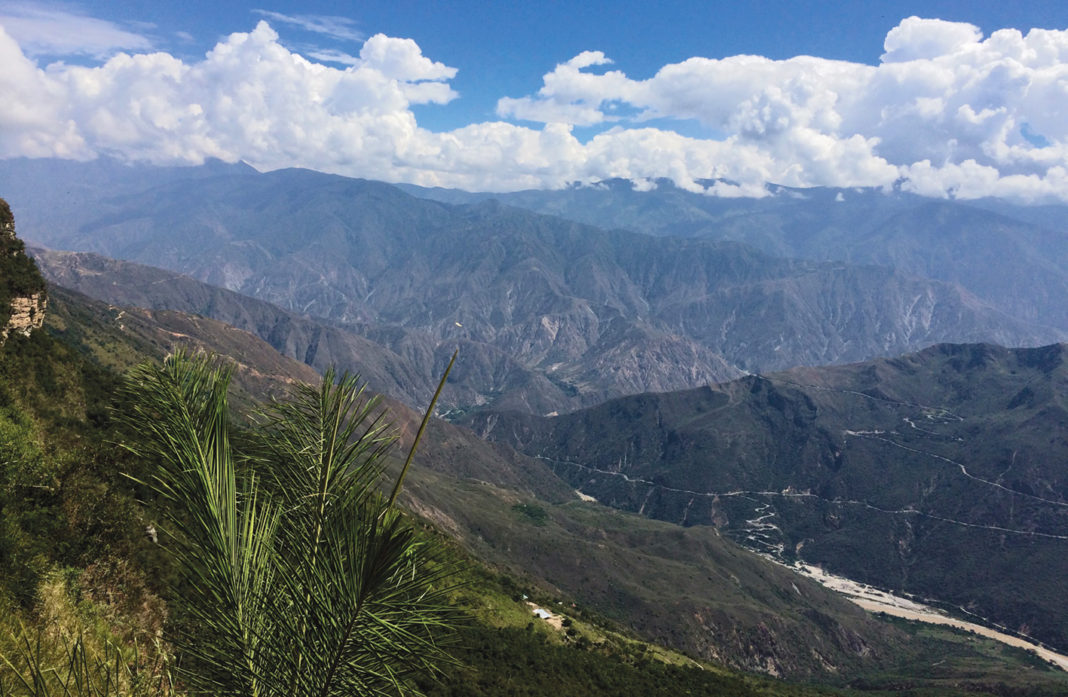 I am an avid cyclist from California and no stranger to adventurous bike rides. On any Saturday morning, you can find me out on my road bike, riding a favorite local route, like climbing the steep slopes of the Berkeley hills along Grizzly Peak Drive, or scaling the Marshall Wall in the famed cycling haven of Marin County. But my recent mountain biking adventure in San Gil, proved to be a test of courage.

Our group of three riders and a guide left San Gil early in the morning, and started up the steep hillside towards the sleepy community of Villa Nueva. It was overcast and cool, perfect for a downhill mountain bike trip into the Chicamocha Canyon, one of the world’s largest canyons that extends for 200 kilometers and 2,000 meters at the deepest point.

After 40 minutes of twists and turns along a bumpy inclined track, the countryside opened out to rolling grassland, at an elevation of approximately 1,580 meters above sea level. Our 4×4 finally stopped in front of a pineapple plantation. After kitting ourselves up with bike gloves, helmets, protective elbow and knee pads, and water packs, we mounted our trusty, two-wheeled carbon-fiber steeds and off we went.

The trip took place in stages. We started out on a rolling, gravel path some of which gave way to a partially paved cemented path with grooves cut into it to give more traction. As we went along the road, the conditions varied: some parts of the roads had deep ruts and potholes, and little tiny ravines. I had to be really cautious while steering my bike, for fear that I might get my front wheel stuck and flip over. After navigating some steep descents along a narrow single track,we eventually arrived at a lookout point that offered spectacular views of the canyon stretched out below. I was awestruck at the dramatic vastness of the Chicamocha Canyon; the sublime scenery rivaled even the legendary Grand Canyon.

After a quick snack, we hopped back into the 4×4 and pushed on for another 30 minutes passing adobe houses adjacent to tobacco and coffee farms. It amazed me that in such an arid, rugged landscape people can still eke out of a living. The jeep crossed an open field, and the road narrowed, until we pulled to a stop. We prepared ourselves for what we had signed up for: the downhill descent of almost 1,200 meters over 14 kilometers. To my right was the cliff face and a few tracks winding up to remote hamlets. To the left – a sheer drop to the bottom of the canyon – and no guard rails. I was in no rush to get to the bot- tom, and I took a moment to absorb my surroundings – the smell of fresh mountain air, the sound of a chorus of birds and insects chirping and the distant rumbling of Chicamocha River, far below. Drawing up my courage, I plunged ahead.

For almost one hour I was completely immersed in the Colombian countryside when our guide stopped us and gave us a choice for the remainder of the descent: easygoing and gentle or tricky and daring. I figured you only live once, so I joined the rest of the group on the more challenging path.

I really thought I was going to die as I navigated the asymmetrical stone steps of the single track that winded down into the canyon. Flying down the rutted road, my heart pounding in my ears, I had to talk myself down from panicking. “Trust the bike,” I told myself, “trust the bike. It was made for this.” Swallowing my fear, I tightly clutched the handlebars, focusing on maintaining my balance. As I dropped and negotiated the steep path, I was drained of all energy. The single track is part of an old Camino Real and was constructed by the Spanish during the late sixteenth century for the indigenous people to reach on foot the Magdalena River from the Santander highlands.

After some precarious riding (feeling very thankful for my padded bike shorts), the trail finally reached the canyon’s dusty floor. The climate reflected the dramatic change in elevation. The terrain at the upper ridges of the canyon consisted mainly of verdant fields home to Brahmin cattle and sheep; but, down in the canyon, where it is rocky, hot and arid, brush forests, home to towering cacti, and fearless goats that roam free among the reddish clay.

Feeling the release of tension in my body and happy to be on horizontal ground once again, I slowly rode on along the gravel road until reaching our lunch spot – a tiny six-street pueblo called Jordán. Resting in the shade of the town’s plaza, I took in my surroundings. The sleepy village straddles the Chicamocha River and the only sound I heard amid the silence that prevails in this remote community, is rushing water. Jordán used to be a busy waypoint for travellers along the old Bucaramanga to Bogotá road; however, once the paved highway was built to bypass the canyon, Jordán was seemingly erased from memory. The town currently has some 50 inhabitants who make a living herding goats, sowing tobacco, and planting coffee.

After eating sandwiches under the cool of well-kept trees, surrounded by typical Spanish colonial white-washed walls and red-tiled roofs, we packed into our all-terrain vehicle and made our way back up the canyon. At one point it started to rain, and I was worried that the road would wash out. Luckily our driver had a sturdy foot and got us safely up and out. After traversing the canyon’s rugged terrain, I thoroughly enjoyed the final cross-country trail that took us from the top of Villa Nueva back down to San Gil, and to a well-deserved cold beer.