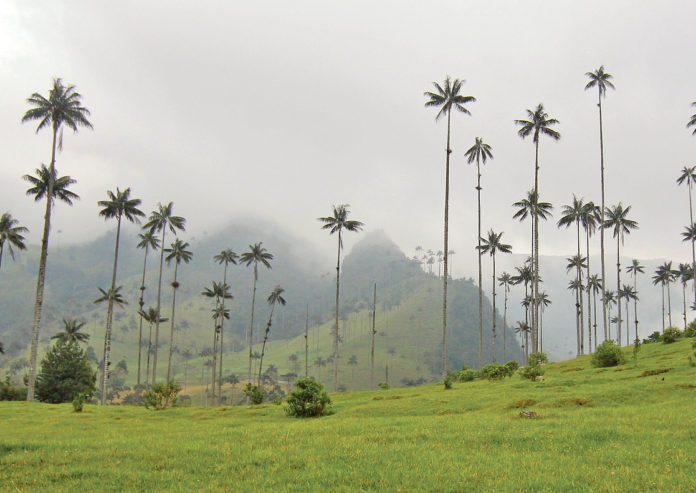 Our minivan clocks up the kilometers as we head towards one of Colombia’s most majestic gardens, the Valle del Cocora, on an undulating super highway called the Autopista del Café. Flanked by the mist-covered foothills of the Central Cordillera and green verdant fields, we are barely beyond the city limits of one of Colombia’s coffee capitals, Armenia, en route to Pereira, when the scenery turns exuberant with bamboo groves dipping into every curve and wax palms swaying in the faint morning light. The journey is matched by our first destination: the Valley of Cocora, home to so many 100-year- old wax palms that, wherever you look, you feel humbled by the magnificence of Colombia’s national tree, a towering, silent guardian watching over one of this country’s great natural wonders.

At the epicenter of the Coffee Cultural Landscape of Colombia (Paisaje Cultural Cafetero) inscribed on the UNESCO World Heritage List in 2011, the Valle del Cocora rises from a broad verdant valley in the Quindío department to the cloud forest of Los Nevados National Park (Parque Nacional Natural Los Nevados). It is home to high-altitude lagoons, wetlands, and endemic species such as the Andean condor and spectacled bear.

After several hours in this breathtaking valley, sipping hot coffee with some locals, we lunch in nearby Salento, a town of brightly painted houses and resonating with the pattering of mule hoofs. Like the other 50 towns that dot the rolling hills of the Coffee Cultural Landscape, covering four central departments (Caldas, Quindío, Risaralda and Valle del Cauca), Salento’s origin coffee must be tasted to be fully enjoyed. Many of the plantations date back to early 19th century and are fully operational, harvesting the same Arabica bean as when the first caficultores set out to conquer palates around the world.

And if you’ve seen those iconic commercials of Juan Valdez carrying sacks of beans through the mist accompanied by his faithful mule Conchita, you get the spirit of what binds this region together and the towns that have preserved the architecture of Antioquian colonization, best represented by their painted balconies and clay-tile roofs. Then again, if exploring the towns of Salamina and Aguadas in Caldas, Jerico and Jardín in Antioquia, you’ll see many locals proudly dressed in emblematic coffee-region attire. After finishing a typical bandeja paisa at “donde doña Myriam” near Salento’s central square, it was time to try on the region’s premium sombrero Aguadeño and raw hide shoulder bag – carriel – for all those peso coins that seem to go further when on the road.

If the mule did its share of hard work during the colonization of this territory, now it is the Willy Jeep, an all-terrain vehicle fondly known as “Yipao.” When World War II ended, the United States Army donated thousands of these jeeps to Colombia so they could be put to use in the coffee industry as a motorized workhorse. Given the mountainous topography of the interior, the Yipao’s versatile nature connected communities to trade and share in the economic prosperity of the coffee harvest. In Calarcá, a yearly jeep parade – Desfile Yipao – is not only the largest in the world, but most likely the most colourful. Well-preserved Willys meander their way through town brimming with fruit, furniture, pots and pans, religious images, and of course, elated passengers clinging to all of the above items.

If coffee has given the world much to muse about, then it is also a source of great pride for the local cafeteros, who with the technological advances in harvesting and roasting can still be seen drying their beans in shade of banana leafs and on the porches of fincas painted in red and white.

If you are looking for a destination that combines a spectacular natural set- ting steeped in local tradition, ripe with arts and crafts, and an architecture that recalls bygone eras, then touring the Coffee Cultural Landscape of Colombia is a must. The beauty of a holiday in this part of the world is that so much can be seen and enjoyed with relative ease, as roads are immaculate and you can fly into four important cities: Armenia, Pereira, Manizales, and Medellín, the largest hub.

If you decide to explore the northern route of the UNESCO-designated PCC, there are two towns – Jardín and Jericó – nestled near the Cauca River that meld the architectural prowess of mid-19th century Antioquian industrialization with local gastronomy, religious heritage sites, and a timeless weaving tradition. Pereira and Manizales offer a central route connecting the coffee-growing towns of Salamina and Aguadas. And if you arrive via Armenia, enjoy an afternoon at the all-coffee inspired theme park National Coffee Park (Parque Nacional del Café), an easy 20-minute drive southwest of the Quindío department’s capital.

If someone asks me what memories stay with me as I look back on the coffee region, it is the sum of many intangibles. But more than anything, I come away recalling those that can’t be photographed. None are better than the aroma of morning coffee and the most important ingredient that goes into a cup: Colombian hospitality.