Our two Chocoano guides laughed at us when we asked if would likely glimpse whales as we set out on a speedboat one morning in August. It shouldn’t be a problem, they assured me and my traveling companions as our lancha sped away from the eco-lodge we were staying at on the Pacific Ocean, south of Nuquí, Colombia, in the Chocó department.

A few minutes into the ride, we saw dark ripples in the water nearby. “Delfines!” our guide Ivan exclaimed as he pointed to the pod of about a dozen dolphins surrounding our boat. These animals weren’t shy; they swam close to us and the other boat full of tourists nearby. Several of them leapt out of the water entirely, plunging back down in an impressive display of acrobatics.

We gleefully snapped photos of our exuberant visitors before zipping off to search for the animals we came to see: humpback whales.

Every August, Colombia’s Pacific waters become a hotbed for the massive marine mammals, which get as big as 12 to 16 meters long and can weigh from 25 to 40 tons. They migrate to the warm tropical waters between July and November every year, swimming all the way up from Chile and Antarctica, where they spend the rest of the year feasting on krill and other food sources.

Scientists don’t entirely understand why humpback whales make the long migration away from their food sources every year, to breed in the tropics said Phil Clapham, director of the whale research program at the National Marine Mammal Laboratory in the United States.

The main theory is that by giving birth in warmer waters, the whales can put less energy into regulating their temperature and more into growth and reproduction, Clapham said. Another is that they travel to get away from killer whales, predators that are much more common at higher latitudes. “The fundamental embarrassment about humpback long migration is, we really don’t know why they do it,” he said.

About 3,000 humpback whales pass by Colombia’s Pacific coast every year, according to Colombia’s Ministry of Commerce, Industry and Tourism. Some of them return to Ecuador and others go as far north as Panama and Costa Rica. Between 800 and 1,000 whales spend the breeding season in Colombia, said Isabel Cristina Avila Jiménez, a marine biologist who has studied whales in the South American nation for more than 15 years.

We were hoping to see some of those annual visitors during our morning excursion. We separated from the other boats and headed south along the coast. After a few minutes, Jhony, our driver, pointed out some movement in the distance and steered the boat in that direction. As we approached, we saw whale fins poking out of the water in the distance and tail fins flapping. One huge whale rolled over, showing its pectoral fin like it was waving at us.

But those whales were skittish and they swam away quickly. We continued south along the coast until we came to a shallow spot with rock outcroppings. Our guides cut the engine and we waited in silence. A few minutes later, we saw two tails emerge above the water. Our guides told us it was a mother and her calf. They had seen them there before.

The show went on for several minutes, with the mother slapping her tail on the water over and over again, and the baby trying to mimic her behavior (with mixed degrees of success). They leapt above the waves and plunged back under, showing their pectoral fins and spurting water up from their blowholes. Even our guides who see humpback whales almost daily seemed delighted by the display.

Having accomplished our goal, we motored back along the pristine coast to the lodge for a lunch of fish, coconut rice, fried plantains and fresh juice.

We stayed at Piedra Piedra lodge, a fantastic spot with delicious food, friendly staff and a scenic view of the ocean from a pool dug into a rock outcropping on the shore. Just up the beach are the El Cantil and Pijiba lodges, which also got rave reviews from their guests.

In addition to whale watching, the lodges rent surfboards and kayaks, and can arrange day trips to Termales, a nearby village with hot springs. Our guides took us on a day hike up into the jungle to look for brightly colored poison frogs, and visitors can see birds like toucans, pelicans, herons and many others from the lodges.

There is one downside to this tropical paradise: getting there isn’t easy.

There are flights into Nuquí several days a week, but those flights are notoriously late and may not travel at all if the weather is bad or if there are delays elsewhere. We met several travelers whose arrival was delayed for days, and we wound up spending an extra night in Quibdo when our connecting flight back to Bogotá didn’t depart on time. The trip is entirely worth it, just be sure to build plenty of extra time into your travel plans. 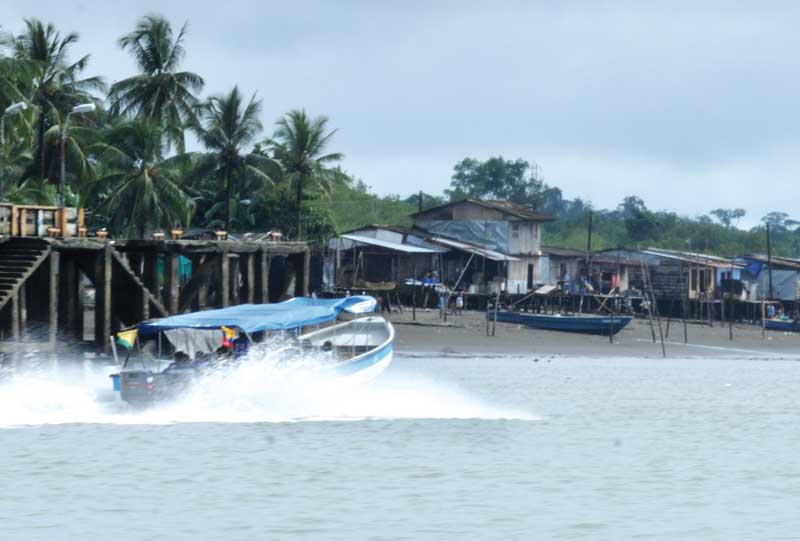 Looking beyond the beach