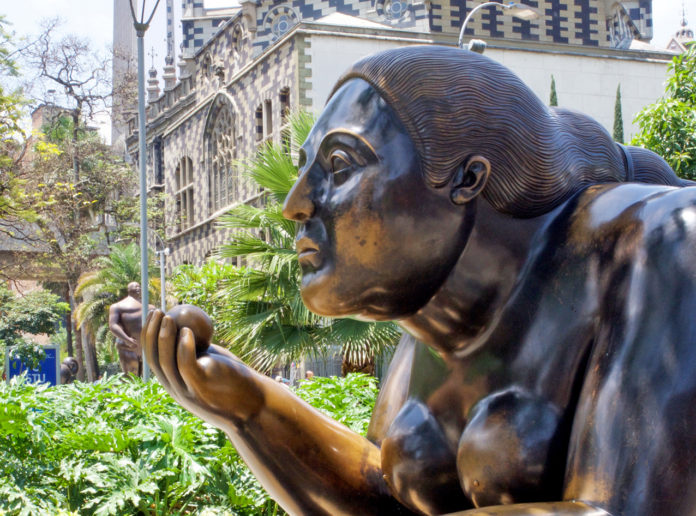 All eyes are on Medellín this month as the city hosts a three day fashion extravaganza – Colombiamoda – and most important happening during the year for designers, models and industry professionals. Even though, one may not be fortunate to get that front row seat at the main catwalk, Colombia’s second largest city will keep you on your feet, as there are no shortage of attractions, parks and hilltop views to appreciate this metropolis nestled in the Valle Aburrá, and home to two million inhabitants.

If visiting the capital of Antioquia by air, your gateway is José María Cordova airport, located 15 minutes from Rionegro, a picturesque town of brightly painted balconies and red tile roofs. The main road leading to the city meanders for 45 minutes through rolling farmland, punctuated by the occasional billboard of airbrushed models in jeans.

Approaching the outskirts of Medellín after a steep and curvy descent,the brick residential towers of El Poblado dwarf open air restaurants, decked with wooden benches and owering earthenware pots. If you want an oven fired arepa with cheese and cold beer, this is the meeting place, especially early in the evening, when the city’s lights illuminate the valley.

Medellín’s elaborate highway system means one can get to any part of the city with certain ease, especially if heading to the central shopping district along the Carrera 50. Most of limestone buildings around the small Parque Berrio were built in the 1950s when this city was the industrial engine of a modernizing nation. From here, it’s only a few street blocks to the Plaza de Botero, a pedestrian zone lined with the 23 sculptures of Medellín most important son, Fernando Botero. Facing the park is the Museo de Antioquia, where even more works donated by the artist are on display, including 19th century paintings by Debora Arango and Pedro Nel Gómez.

From the once grand Nutibara Hotel with its Bauhaus architecture, to the city’s tallest building, the Coltejer tower, Medellín’s centro is bustling during the day, but not recommended at night. For cocktails, the place to be is Parque Lleras – the city’s own Zona Rosa – located in the El Poblado neighborhood. Along the Carrera 37, you’ll find plenty of eateries, from Italian pizza to pub grub, as well as some of the city’s fine culinary establishments. There are plenty of boutiques for window shopping and outdoor patios to enjoy a snack. One favorite is Pergamino Café for a good afternoon coffee and a sandwich at Flip Flop.

Children get restless on vacation, so to keep your little ones occupied for a few hours, visit the interactive science museum Parque Explora. The eclectic red building was designed by Giancarlo Mazzanti, and faces a large open square with pools of water and fountains. Nearby is the city’s Planetarium and largest freshwater aquarium in South America.

Another much-visited attraction is the botanical garden with its butterfly pavilion and permanent exhibition dedicated to orchids. Do yoga on the lawn or just relax by the lily covered pond, the Jardin Botánico Joaquín Antonio Uribe is a great excuse to give yourself a few hours away from the bustle of the malls, and show your children some of the 200 varieties of Colombia’s national flower.

On a small hillock, on the west side of the Río Medellín, is a quirky replica of a typical Antioqueño town complete with a white chapel and souvenir shops facing a cobble stone plaza. Pueblito Paisa’s panoramic views of Medellín and surrounding mountains are best enjoyed late in the afternoon, when a golden light bathes the Valle de Aburrá. At the foot of the hill is the Sculpture Park, open from 6am to midnight, showcasing modern works by national and international artists.

Innovation in Medellín is not just relegated to edgy architecture and an ongoing investment in revamping derelict spaces into cultural and educational venues. When it comes to dining out, the city boasts a complete range of international options, as well as plenty of the típico. At the southern end of the city, is Envigado, a satellite community where many of the most traditional restaurants are clustered together serving an authentic Bandeja paisa. If you reach Trifasíco, prepare for a feast of pork rind and beans.

The annual flower festival, Desfile de Silleteros, is held every August and one of the highlights of Medelliín’s rich cultural agenda. But with less than a month of holidays before the start of the new school year, July is as good a time as any to visit this exciting city that dares to be bold, and at the heart of fashion, always beautiful.