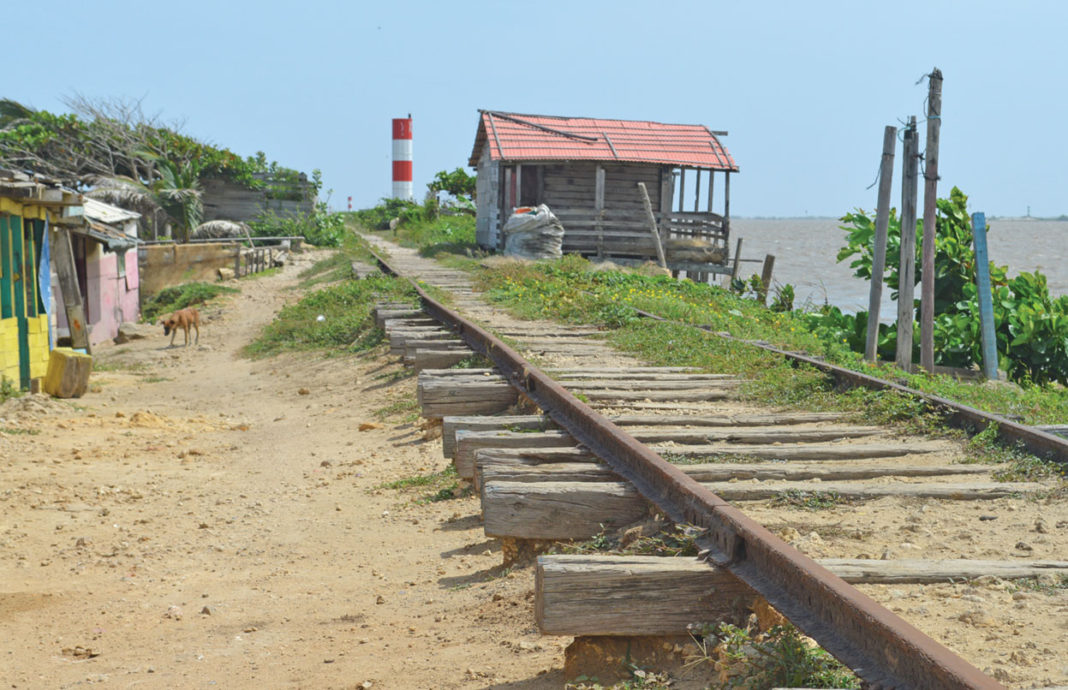 Barely able to stand, I lean into the fierce wind wondering if it is like this everyday. Hanging on to my baseball cap firmly, Juan tells me it will get worse as we approach our destination. Defeated, I slowly put the cap in my pocket knowing both hands are needed to operate the camera. A few minutes earlier, we turned down an offer for a ride in a box rail car, and now debate whether that was a good idea. Standing in the middle of one of the few remaining railroad tracks in Colombia, we begin our unsteady walk to where the river meets the sea.

On a road trip across northern Colombia, we left Santa Marta that morning zipping along the coastal road with a few scenic views of rolling waves merging into the beach, rusty-colored salt fields, graceful egrets feeding in wetlands, crumbling wood huts sheltering half-dressed children and hands reaching for us from roadside vendors.

Just before reaching the busy downtown of Barranquilla, our car finds a road traveled mainly by those who work with the sea to a not-so-touristy place called Bocas de Ceniza. Spanish for “Mouth of Ashes” the Spanish conquistadors considered where the murky ash-colored Magdalena River smashes into the blue waters of the Caribbean a key point of entry into South America’s unexplored interior, hopefully leading them to gold. Still today, this area serves as a vital door to the Magdalena River for a robust commercial freight business.

We begin our walk along a peninsula where some areas are less than 30 meters wide. I am impressed by the obvious different views. The inviting blue ocean on my left and the bleak fast-flowing river on my right. The contrast between sprawling sandy beaches and a weed-filled rocky shoreline is accentuated by Barranquilla, a city that serves as a backdrop for fast-moving sailboats and gigantic rusty ships moving towards port as if floating in molasses. We pass fishermen in colorful boats and large lizards snoozing in the shade of rocks that hold back the sea.

Originating in the high Colombian Andes, the Magdalena River flows almost 1,500 kilometers through Colombia making it the principal liquid artery of the country supporting more than 48 million people. When the river gets close to the sea it often overflows its borders, creating the Magdalena River Basin consisting of hundreds of tributaries resembling blood veins reaching for the ocean. South America’s fifth largest waterway, the Magdalena estuaries cover 24% of the national territory. According to the Nature Conservancy Organization, the wetland includes one of the greatest biodiversity regions of the planet, supporting over 200 wildlife species, and some endemic to Colombia.

Along the way, we pass empty shacks guarded by dogs waiting for their owners to return from fishing the frothy waters that stir up edible sea creatures. Exhausted from the persistent wind, we stop for an orange soda at a not-sure-it-is-open tavern next to a sandy beach anchoring ghostly wooden sun shelters that seem to be stuck in time. Human life above the sea is eerily quiet and calm, but the waters near the point are anything but.

The Magdalena River is not the only river that flows into the ocean along the Colombian Pacific and Atlantic coastlines, but it is the largest. Sister rivers Cauca, Nechí and San Jorge join its mission to reach the sea. Instead of fizzling out like most rivers, the massive fast-moving Magdalena slams into the sea with a dramatic elegance. Ash colored water reaches for many kilometers beyond the Bocas de Ceniza point before consumed by a blue caribe.

While trundling against nature’s force, I am reminded by Paul Williams’ song When the River Meets the Sea, a catchy tune sung by John Denver and Kermit the Frog during a Muppet Christmas TV special. The lyrics, however, are not holiday-related. They recount a son mourning a death and sung by his mother to help him grieve. The river is symbolic of life and the point it meets the sea symbolic of death – the peaceful transition to an afterlife.

The Magdalena River carries tons of sediment that is dumped relentlessly into the sea, mixing with the salt water to create yet another habitat for unique sea creatures, especially frenzied sharks that feed near this angry mouth. The end of the great Magdalena River is the beginning of a different liquid habitat that sustains life, and worth bucking the wind for. 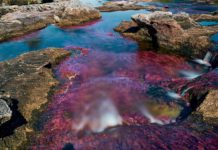 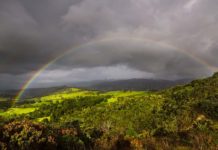