The trip to Tequendama Falls is a bit rough on the nose. You start with the TransMilenio and its diverse mix of body odours and strong perfumes. Once you’ve transferred to the more fragrant feeder bus, an open window introduces you to the assault that is Soacha.

Dust mixes with the exhaust of post-apocalyptic factories and the traffic jams that permanently lock down the Autopista Sur. From Soacha’s Terminal Sur, there’s the Tequendama bus which ultimately breaks out of the city into Cundinamarca’s pristine highlands and bouts of fresh air.

Circumnavigating a capital of 8 million, the Río Bogotá (Bogotá River) exits the verdant green of this high Andean plateau at the Tequendama Falls, free-falling 160 meters into a narrow canyon.

The balcony of the Hotel El Refugio del Salto is the vantage point from which tourists can observe this natural tumble and falls.

The Tequendama has its mythical origins with the Muisca peoples who inhabited the valleys and highlands of what we know today as Boyacá and Cundinamarca. Their god Chibchachum, in a fit of rage (which seems characteristic to many gods), flooded the Bogotá savannah in an attempt to destroy the human race.

In response, his more level-headed colleague Bochica used his golden staff to open the rocks at Tequendama, creating a waterfall that would drain the savannah and make it habitable again.

The falls drew Muisca people who opted for the decidedly poetic end of jumping to their deaths.

After Spanish colonisation, the falls drew Muisca people who opted for the decidedly poetic end of jumping to their deaths instead of a life of slavery.

Possibly the world’s most picturesque train station was built further along the canyon overlooking the falls in 1923, and today you can still see the platform’s handrail half buried above the highway.

With its republican architectural style, the building was far too beautiful to be a train station for long and soon became the Hotel Refugio del Salto, a hangout for Bogotá’s rich and fancy throughout the 1920s and 30s.

Sadly in the 1970s, the sewerage started flowing at noticeable levels and after a stint as a restaurant, the building was abandoned. Meanwhile, a dam and hydroelectric plant upstream not only reduced the falls to a trickle in dry seasons, but diverted the Bogotá River into surrounding creeks and valleys before reaching the mighty Magdalena River.

Efforts are being made to clean up the Río Bogotá, and the defunct hotel is currently open weekends and holidays as a museum while renovations take place.

For $4,000 pesos a tourist guide will take you through the building, expounding on the history and the falls amongst the diagrams of a French anatomy artist that are currently on display.

Muisca legends and Tequendama’s depressing reputation as a suicide spot for Bogotanos have led to beliefs about ghosts in the hotel and plenty of YouTube “evidence” to go with them.

Carlos dismisses them all as “campfire stories,” but walking five minutes up the highway, jumping the barrier and ignoring the “Prohibited” signs will take you to the very edge of the falls, from where many poor souls have jumped. According to Carlos, the most recent case occurred one month ago.

Tequendama is a somewhat strange place – clouds collect in the valley, cooling things down as you draw closer, and often hiding the falls in fog while the sun turns buses into ovens just half an hour away in Soacha.

It is a truly magnificent view down the valley, standing at the very edge of a 160 metre cliff as countless thousands of litres of water shoot out over the abyss beside you every second.

But it’s also frustrating to know why the water is black and smells, well, like eight million people have been to the toilet in it. The sheer power of the water is an exhilarating example of natural force, and yet it’s sobering to think of the poor souls, Muisca and Colombian, who have stood at that same spot seeing no other option but down.

There are plenty of metaphors about modern Colombia that you could pull out of that, but it’s sufficient to say that a visit to Tequendama Falls is a beautiful, frustrating and exhilarating experience all at once, and therefore very Colombian. 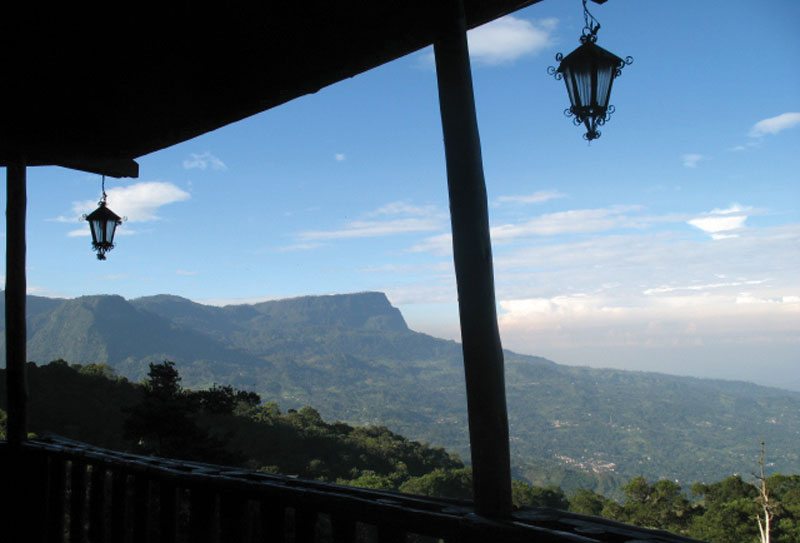 Chicaque: Retreat to the clouds