Limeños will remind you that their capital turned its back on the ocean when it was founded. If it weren’t for the ceviche stalls, the pier that reaches into a grey Pacific and a broad walk over cliffs and coves, one might believe Lima was at the heart of a desert, where the only water to be had is carefully collected during rainfall.

A similar predicament faces another metropolis in South America: Medellín. Hemmed in by cascading green hills and high altitude lakes, the city turned its back on the river that flows through it. In denial that the waterway that is the Río Medellín could serve any good, let alone be navigational, the capital of Antioquia embraced its mountains and shunned the river. While factory owners benefited from the low rents along the Río Medellín’s corridor at night, and day laborers punched the clock and returned to their communes in the north, the river’s edge became a place of impunity. Crime took over the neighborhood and abandoned warehouses were used as brothels and drug emporiums. The ‘Ciudad del Río’ or City by the River earned a reputation as the kind of place you only went to during the day, and best escorted by local.

One of the largest employers of the Ciudad del Río was the Talleres Robledo iron mill. Sprawling along the eastern fringes of the Río Medellín, it was a factory city with its own rail network for moving coal, and when its many ovens were operational, the grey plumes of smoke could be seen from every vantage point in the city.

Ciudad del Río was a testament to the industrial growth of Colombia’s most industrious city. From the turn of the last century to the early 1980s, Medellin meant manufacturing on a large scale and the inevitable rise of a self-made bourgeoisie. Staunch catholic values fueled a work ethic and love of region that was envied by many Colombians.

Paisa culture became synonymous with progress and Talleres Robledo was one of many industrial patrons that occupied the river’s edge and pumped money into the economy. But the days of growth and expansion were numbered. Increased competition from China began to erode the bottom line, and Medellín’s mills cooled. Pablo Escobar was the entrepreneur of the moment. A man protected by hired assassins, Medellín, image of a peaceful and hard-working city quickly became one of cocaine, cash and bombs. It wasn’t the kind of city you now looked at to set up your business.

The end of the Medellín cartel with Escobar’s death in 1993 gave the city a new lease on life. The decaying warehouses of Talleres Robledo began to be seen as prime real estate by mayor Sergio Fajardo who made it an objective to turn derelict parks into safe havens for young and old to enjoy. Several of the brick buildings in ‘Ciudad del Rio’ became trendy lofts and affordable real estate for young, first time buyers.

The face-lift of Ciudad del Rio became official when the city’s modern art museum, the Museo de Arte Moderno de Medellín (MAMM) established itself in the largest and most emblematic ore smelters. Following the example of the MAMM to give the art scene a contemporary home are the many terraced bistros and cafes that have opened their doors near the museum’s gift shop. From the comfort food at genteel Bonuar to the rather stellar and molecular explosion of dining establishments in nearby El Poblado,  ‘Ciudad del Rio’ is an example of Medellín’s enduring spirit of endeavour.

What once was an untouchable part of the city is now a liveable and eco-friendly habitat defined by graceful avenues, the gleaming glass towers of  the Bancolombia headquarters and a park that has come back to life with children, dog walkers and audaciously hip skateboarders. It is also an example of how to best develop your decaying urban spaces, invest in youth and potential for change, but also reclaim that which flows through the heart of the city: the Medellín River. 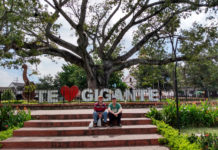 Between Earth and Sky: A guide to adventure travel in San...