When the last black steam train pulled out of Apulo one Sunday in 1978 from a platform teeming with onlookers, the small Cundinamarca town lost its vital lifeline with Bogotá, even though it is located in the foothills of the Tequendama valley a mere 90 kilometers from Colombia’s capital.

Today, Apulo is a community of 16,000 and accessible in two hours from Bogotá city limits along the meandering Mosquera-to-Girardot highway.

Yet during most of the 19th century, Apulo’s claim to fame was the “Iron Rooster,” a reliable, yet painfully slow, mode of transport that moved weekenders in fedoras and flowing dresses from the drizzly Central Station of Bogotá to the babbling brooks and streams of the Magdalena basin.

One craggy hillock separates Apulo from its sister weekend community of Anapoima, which receives the bulk of the area’s hot-country tourists and was baptized as the “second best climate in the world” by a National Geographic documentary.

Apulo is even hotter than Anapoima. It’s a dry, sunbaked heat, burning and sweaty, that is considered a blessing by both locals and visitors. The heat of Apulo keeps this pueblo on its feet  — and in the shade.

The main street is reminiscent of a high-noon scene in a spaghetti Western. A wide dirt road divides the populace in two by a median, both sides lined with peeling storefronts. Splintered balconies and rusted ironwork decorate restaurants that have never had much charm but serve the open-road clientele in their SUVs with cholesterol-churning, newspaper-wrapped pork rinds.

Along this fractured landscape, cratered by meteorites, the abandoned rails of the age of steam emerge through wild grass.

In the main square, the Republican town hall perpetuates a sense of lost grandeur. Painted in classic yellow and white, the building used to constitute the most elegant hotel of Colombia.

But this was before the cement company moved their production elsewhere, taking hundreds of jobs with it. And before condominiums began sprouting up on hillsides to provide employment for Apulo’s residents and allow the town to reap some rewards from its infernal climate.

Weekend visitors and residents are divided by a 10-minute drive, the short distance between the gated communities and houses by the river. The condos are surrounded by concrete walls as high as treetops and guarded 24 hours a day by security. They contain bungalows with open layouts, violet-tiled swimming pools and tennis courts.

On Fridays, executives exchange their bespoke shirts for polos and Oxfords for sandals. Mothers trundle along in golf carts applying (and reapplying) sunscreen to faces of little ones. On Sundays, air conditioning is turned up full blast for the two-hour trek up the Eastern Cordillera.

Some of the houses by the river have walls; others consist of tin roofs balanced atop wooden beams. Dust from passing cars filters through cracks in their facades. Little girls march through the dust in their mothers’ high heels, while boys stand in doorways clutching baby chicks between their fingers. Homeowners sit outside in folded armchairs, constantly squinting.

On Fridays, the mothers and boys don their uniforms and pass through the condominium gates to make ajiaco and clean leaves from swimming pools. On Sundays they all wave goodbye, hoping the visitors return next weekend.

At dusk, Apulians congregate in the main square to appreciate the evening wind. As couples lean into each other beneath the glow of old-fashioned lampposts, empty beer bottles stack tables. When the weekend visitors drive past, heads swivel to watch.

The night hides graffitied walls and potholes, and it’s easier to imagine the pueblo as it once was: a quaint place to live, a cozy getaway for Bogotá’s elite. At dusk, the main square would be full of music. Children would play on the swings as angular cars rumbled up to the hotel’s glowing white steps. Honeymooners would stroll arm in arm and apprize the square’s warm-to-the-touch statues.

Today the condominiums serve as a getaway instead. Weekend visitors still wonder at the same buffered landscape and swarms of mint-green butterflies. They descend on the town for the same dry heat. In Apulo there is constant movement, except for a train, a fleeting remembrance of steam and station devoured by vines. 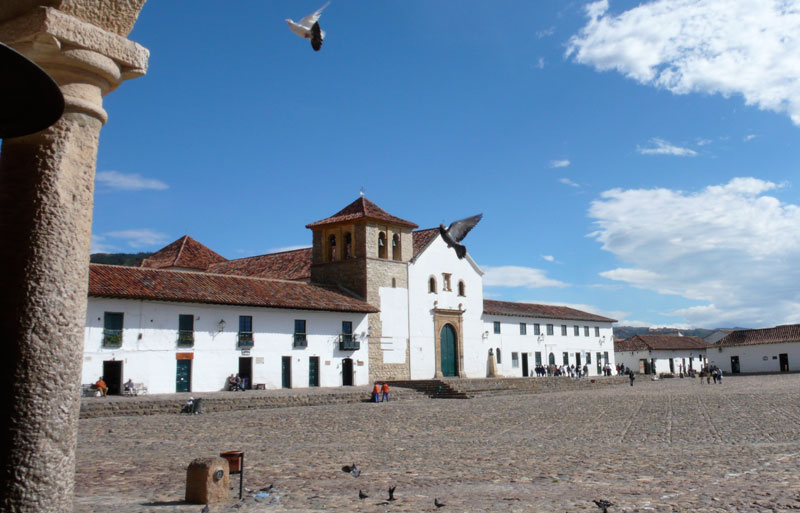