Among Colombians, the department of Caquetá has long been synonymous with the tragedies and violence of both the country’s internal armed conflict and war on drugs.

Located in relative isolation from the center of the country, Caquetá has always been part of that “other Colombia”, a territory where for decades the Revolutionary Armed Forces of Colombia (FARC) guerrilla was the only rule of law, and the economy revolved around the coca trade.

Since its beginning, Caquetá has been a beacon for adventurers and risk takers who have flowed into the region to the rhythm of economic booms and cycles of violence in the interior of the country.

Those who came to this department in search of new opportunities during the mid-1900s tell stories of a pristine territory where anything was possible. Original colonists such as Ramiro Morales, 68, maintain clear memories of entering these hinterlands for the first time as a young man, trekking through the jungled cloud forests of the western cordillera of the Andes, which drape across the northern region of Caquetá, before descending into the Amazonian basin.

In the era in which Morales and his family arrived, Caquetá truly was a region where dreams were built seemingly from nothing aside from blood, sweat, tears and sheer willpower. However, this gilded age would soon give way to a period of some of the worst violence the country has seen during more than half a century of armed conflict.

As fighting intensified between the FARC, the Colombian military, paramilitaries and narcotraffickers, Caquetá was effectively converted into a territory of constant combat, earning the reputation as “the Vietnam of Colombia.”

Though it is difficult to forget the tragedies that have played out on Caqueteñan soil in the not-so-distant past, this region has for years existed in a state of relative calm.

The fact that this region was, for decades, best avoided at all costs had the unintentional effect of keeping its immense natural beauty a secret from the rest of the world. Today, the department of Caquetá has begun to reshape its identity as a unique destination known as “The Golden Gate to the Amazon.”

A true gem for anyone interested in nature, adventure sports, indigenous cultures or simply impressive landscapes, Caquetá is a lost paradise populated by friendly people who are proud of their department’s natural beauty and eager to share it with others.

To visit Caquetá at this moment is to truly go “off the beaten path,” following the same pioneering spirit that has always been part of the region’s history. As the tourism industry is only barely beginning to forge itself into a meaningful part of the department’s recuperating economy, now is the time for those hoping to be some of the first visitors to this unknown region.

As one of the pioneers of ecotourism in Caquetá, Guillermo Vargas Marulanda explains what Caquetá has to offer beyond the other outback territories being promoted by the state.

“Caquetá, at this time, is still what they call ‘virgin’ because very few people — neither Colombians nor foreigners — have come here due to the history of the armed conflict. But now, we finally have the opportunity to show all of the natural marvels that we have here such as the waterfalls, rivers with pure water, native forests, flora and fauna.”

Ideal for those seeking a truly unique adventure, Caquetá is in many ways a final frontier, a region little known to anyone aside from those who inhabit its territory. The unique geography of the department — which is one of the most biodiverse in the world — lends itself to an unimaginable array of outdoor adventures.

According to Marulanda, who makes his living as a down-for-whatever adventure guide, the department can be divided into the three main adventure corridors.

“In Caquetá we have determined three ecotourism routes: the Northern Route, the Central Route, and the Southern Route. In each route, there are different sites to visit. We do all sorts of activities such as canyoning, spelunking, rappelling, rafting, ecological walks, interpretive hikes, paragliding, swimming, cliff jumping, free diving, bird watching, scientific tourism and more.”

Though the department has many opportunities for extreme, once-in-a-lifetime adventures, there are also plenty of opportunities for those who simply wish to relax and take in the scenery of one of the planet’s most beautiful regions, where unbelievable arrays of trees are decorated with orchids, monkeys, parrots and macaws and where pure, unadulterated water flows through immense networks of rivers which eventually empty into the mighty Amazon itself.

In the general absence of marked trails and tourist infrastructure, one can count on the several different eco-lodges throughout the region that are run by individuals like Marulanda who are passionate about sharing the best-kept secrets of their department.

El Horeb, an eco-lodge located outside of the small town of Belen de los Andaquíes, is one such place. Years ago, before “ecotourism” was even a far-fetched notion in this region, Marulanda started El Horeb with the idea of cultivating in others the same love he feels for the beautiful Caqueteñan countryside.

“My idea with the eco-reserve of El Horeb is to allow visitors the possibility of having intimate contact with nature,” he says.

Over the years, he has forged more than twenty trails that crisscross rivers, jungles, clearings, waterfalls, and a magical, secret location he has dubbed “The Uterus of the Pacha Mama”.

“Not everyone can enter this place. The truth is, you have to gain the entrance by showing humility and respect towards nature,” remarks Marulanda.

Like many other eco-reserves in the region, visitors can stay for the day at El Horeb, or choose to spend the night inside a casa campesina or camped out under the stars. For those hoping to stay in the capital city of Florencia, a broad selection of hotels and day trips to different sites in the area truly give visitors to Caquetá the option to scale their adventure level to what feels appropriate.

As a foreigner living in the region, I can attest to the magic and mystery of the region, a force referred to in local legends as “la manigua,” to the genuine hospitality of its people, and to the guaranteed adventure awaiting anyone who wishes to experience this hidden treasure.

Caquetá is a place that literally pulsates with life, a zone that has left behind its dismal past in favor of a future as one of the most exciting and beautiful destinations in the country. 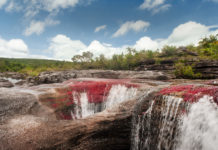 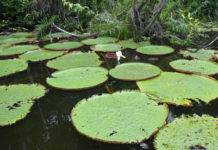 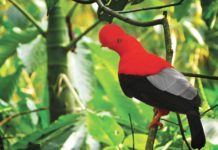