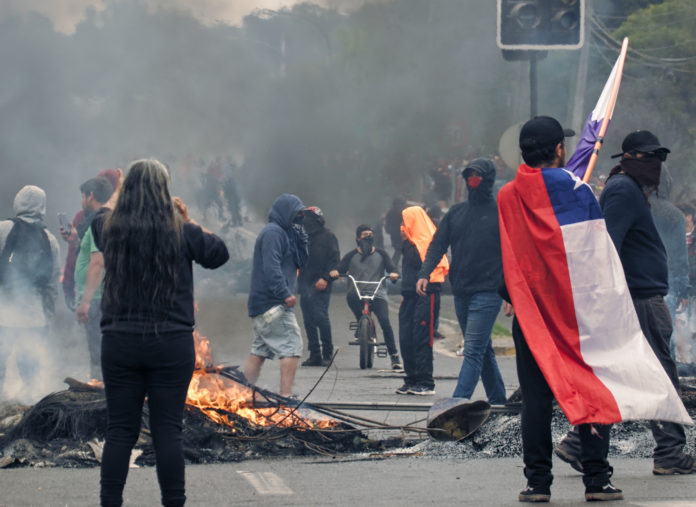 In the midst of social and political upheaval throughout Latin America, Colombia is preparing for a Paro Nacional potentially beyond what it has seen in recent years. Paro Nacional, also referred to as #21N on social media, will take place throughout the nation on Thursday, November 21. Colombia’s three largest unions, Central Union of Workers, CUT, the Confederation of Workers of Colombia, CTC, and the General Confederation of Work, CGT, have committed their participation. They will be joined the Confederation of Pensioners of Colombia, CPC, as well as political organizations representing farmers, indigenous groups, Afro-descendants, environmentalists, artists, women, and students. The anti-government demonstrations will mark one of the latest challenges to President Duque’s administration, since he was democratically-elected in May 2018.

In the days leading up to the strike, the Duque government increased military and police presence throughout the country, and particularly in large cities including Bogotá. Most expect the capital to be the epicenter of the national demonstration. The city is also prepared for a major halt with tens of thousands expected to take to the streets. Mass transit system TransMilenio will operate on a normal schedule, but with additional police presence in stations and patrolling designated bus lanes. Several universities and schools have canceled classes.

International observers question if the national strike may bear similarities to protests in Ecuador, Chile, and Bolivia. The Colombian protests contain several grievances on behalf of different groups, ranging from violence in the south of the country, labor contract disputes, corruption in universities, and the recent revelation of eight children killed in an August military operation. Many are also protesting what they claim is a Duque “package” of planned pension, taxation, and education hikes, but which have not reached Congress for approval. In contrast, protests in Ecuador, Chile, and Bolivia had a singular spark that led to widespread, sudden, and spontaneous unrest: metro fare increases in Chile, the rise of gasoline prices in Ecuador, and election irregularities in Bolivia.

While close political allies of Colombia are waiting on the sidelines to see if the protests are conducted peacefully, the recent student protests of September and October generated little international news. The much larger scale of a Paro Nacional suggests a shift may occur. Despite tensions between Presidents Donald Trump and Iván Duque, the U.S government is a staunch ally of the current administration, given its opposition to the Maduro regime in Venezuela, and Colombia’s strategic importance in the region.

The most significant international news has focused on the closing of land and river borders from Wednesday, November 20 at midnight to Friday, November 22 at 5 am. As justification for the move, the government has alleged that national intelligence has detected foreigners, including from Venezuela and Chile, attempting to infiltrate the demonstrations on Thursday. Migración Colombia also deported 24 Venezuelans on charges of intent to incite violence during the demonstration.

The recent actions demonstrate the government’s intense concern over foreign interference and the potential repeat of destabilization occurring throughout Latin America. Duque himself has claimed that the Foro de Sao Paulo, or the Sao Paulo Forum, a leftist conference of political parties, has called the Paro Nacional to “intend to destabilize democracies of Latin America.”

In the rest of the continent, spectators and governments have responded to protests and political changes. The US government announced its recognition of Jeanine Añez as interim President of Bolivia, following the ousting of Evo Morales. The Mexican government, led by López Obrador, has hosted the former leftist Bolivian leader for the past week. An international consortium of 700 academics, led by American philosopher and gender theorist Judith Butler, wrote a letter to the United Nations pleading action on ongoing police violence against protesters in Chile.

“As intellectuals and academics from different parts of the world, we follow with great attention the current Chilean constituent process… we are responsible for not leaving to denounce and contribute to stop once this state violence towards the Chilean people,” stated the letter, sent November, 11 2019. During one month of protests in Chile, 22 people have died, and more than 2,000 injured.

Colombia has yet to see if it will face a similar, longer-term upheaval with the spark of #21N. Left-wing political leaders, including FARC’s Sandra Ramírez, Colombia Humana’s Gustavo Bolivar, and former Bogotá mayor Gustavo Petro, have made calls for Colombia to follow the lead of its Latin American counterparts. Petro, even went so far as to call on the city’s two football bravas – hooligans – to join the protest. A recent tweet by Bogotá City Councillor Manuel Sarmiento of Polo is one of many in his party supporting the Chilean cause on social media: “We will see each other on the streets because we are going to face the neoliberal package [of Duque] with massive mobilizations throughout the country. Colombia will follow the example of Chile and Ecuador!”

Colombia’s right-wing politicians have not remained silent on the objectives of Paro Nacional, among them former President Álvaro Uribe Vélez who signals Venezuela’s Maduro, through the Sao Paulo Forum, for inciting a hemispheric crisis. Senator María del Rosario Guerra, in her Twitter feed, called on “workers, students and families who love this country to NOT be fooled by some senators like @GustavoBolivar and @petrogustavo
who, because of their class hatreds, seek to take this country to the brink.”

Colombia’s anticipated Paro Nacional remains a localized and polarizing event, aimed at challenging the institutionality of President Iván Duque, but much can change on Thursday, given the actions of protesters and the government’s response to violence.