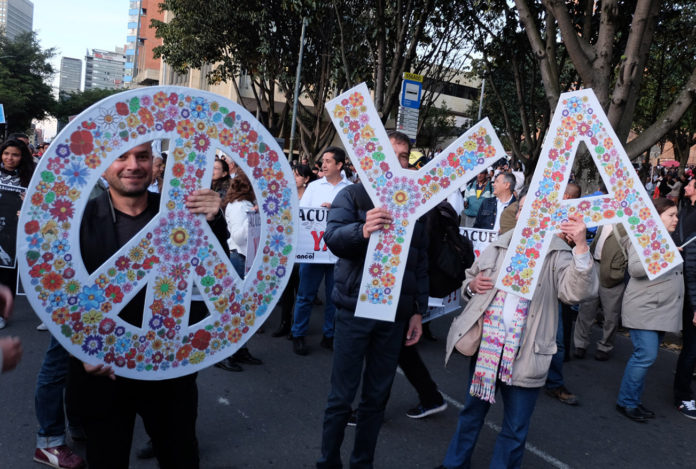 Three weeks after the peace plebiscite was narrowly defeated at the ballot by Colombians, a new round of negotiations between the government and the Revolutionary Armed Forces of Colombia (FARC) guerrilla has begun in Havana, Cuba, to reach an agreement before the end of the year.

The peace accord that was almost ratified last month can be understood in different ways, by its most staunch protagonists: a carrot and a stick.

Álvaro Uribe was elected as president of Colombia in 2002 on a promise to be the stick. With U.S. money and armaments in hand, he turned the commercially important parts of Colombia—namely Bogotá, Medellín, and some of the country between those cities plus a few of the ports—into heavily garrisoned, protected zones. In other parts of the country, he went after FARC on the ground and from the air with no misericordia—no mercy. His tactics were extreme and effective. He famously oversaw the freeing of kidnapped presidential candidate Ingrid Betancourt in 2008. The daring military operation that rescued her had, he said, been guided by the Holy Spirit and protected by God and the Virgin Mary.

In practical terms, it had been made possible by repainting a Colombian air force helicopter with the insignia of the Red Cross. The International Commit- tee of the Red Cross objected, but its outcry was drowned out by a nation celebrating its steely president’s heroics. That rescue operation was code-named Operation Checkmate—a name that still seems well-chosen. FARC never recovered its prestige, and its relative savoir faire as fighters, already on the wane, has only continued to decline. They had not been able to keep up with the advances of modern warfare. They had no satellites and certainly no laser- guided bombs. They had an oversupply of Kalashnikovs and an impoverished army of youngsters willing to fire them, but not much else by way of material.

Uribe was an upstart, from land- holding people in the department of Antioquia and not an “inside man” from Bogotá’s upper echelons. Above all, he was hungry for success on the battlefield and baptized himself as “Colombia’s first soldier.” Colombia, generally a faithful ally of Washington, fought alongside the United States and its allies in Korea. Not in Vietnam, though, a war that taught its combatants that the death count on the evening news was a red herring at best and a sadistic indictment of the human spirit at worst.

Uribe’s strong-armed duplicity was a means to two ends—pacification of the countryside and restoration of faith in the city. He was successful on both counts. Violence perpetrated by Colombian civilians had declined precipitously by 2010 when he left office, and their faith in the possibilities for the free exercise of commerce had gone up by leaps and bounds. The faith of foreign investors was also on the rise. Colombia, long a magnet for capital from richer countries on the continent, such as Chile and Brazil, had become a draw for formerly timid capital from further afield. Within the last five years, Colombia has signed free-trade agreements with the United States, European Union, Canada, Israel, and South Korea, as well as other smaller economies.

But Uribe’s shot at a third term— something forbidden by the constitution—was unsuccessful, and in the presidential elections of 2010, he reluctantly oversaw the election of his protégé Juan Manuel Santos. Devoid of Uribe’s heavy, avuncular charisma, Santos was a scion of the Bogotá elite. Another known, but unbelievable, fact: by the end of Uribe’s presidency in 2010, the Colombian military had almost as many men and women fighting in its ranks as the militaries of Brazil and Argentina combined.

Despite his demonstrated prowess at military expansion, Santos, who had served as Uribe’s defense minister in an era of victories and excesses, quickly came to see himself not as an extension of the stick but as a purveyor of his own carrots. In 2012, he opened negotiations with FARC in Havana that set out to tackle fundamental issues of national importance, such as agrarian reform, the possibility of FARC entering politics, and transitional justice. By the time the deal was signed, that justice would allow almost all of the rank-and-file members of the FARC and most of the leadership to go free if they confess their crimes.

Uribe and his supporters were furious with Santos as soon as he made it clear that he would not be a patsy for his former boss. They are even more furious at a botched peace they claim is all carrots brought to market at knocked-down prices. But after the failed plebiscite, Uribe and Santos were re-united, not around Fernando Botero’s “Dove of Peace,” but in the crisis room of the presidential palace they have both called home.

After getting the result he wanted at the ballot, Senator Uribe must either seize this historic moment to hammer out a better deal for the nation or forever suspend his tweets.

One strange thing about the war between the state and FARC is that surprisingly few Colombians admitted that there was a civil war being fought in their country until very recently, long after most foreigners had observed that it was the longest-running and most intransigent internal conflict in the world. President Uribe asked the media to refer to the FARC as the “FAR,” the Revolutionary Armed Forces of ____. By denying that they were Colombian, fighting Colombian iniquities, they could, perhaps, be willed out of existence. But what a difference a decade makes. What a difference a rainy Sunday in October has made.

Now Santos, FARC, and Uribe have recognized that “democracy” is more than a catchword and that the ballot may not heal political wounds of the past but must address them. The guerrilla have gone from being unspeakable to being, implicitly, the representatives of a certain segment of Colombian society—whether they like it or not—for the next decade at least.

Though FARC still aspires to join the democracy, they have not yet come up with a name for their new political party, nor a platform. “Our platform is the text of the peace accords,” they say, as if working on the terms of their peace and the terms of their politics would have been too much to do during five decades in the jungle. Of course they are being disingenuous, but they know what they want: power.

President Santos declared before the doomed plebiscite that “the economic model of this country is not up for discussion.” But as a new round of talks begins in Cuba, and a contentious tax reform presented last week to congress, it clearly is.