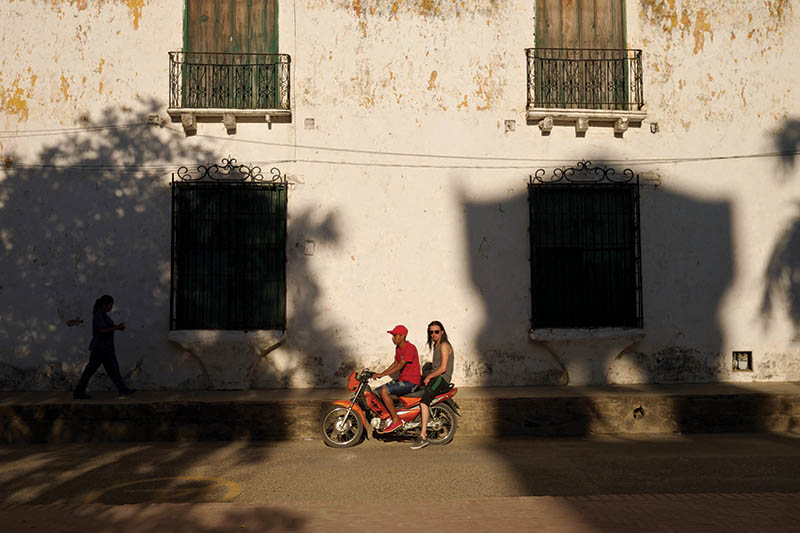 The sign on the door asks only of visitors to knock before entering. With her whitewashed façade flaking, upon first glance the building yields nothing of her affections, for this is but one more front to a vast and uncared for property in Mompós. Location, structure, state of repair, size and environmental attributes must all be taken into account when thinking as a realtor, so perhaps it’s this house, now in the hands of the once wealthy branch of the Dovales family in Mompós, which has its bases covered in all but one sense.

It’s not that she is unloved, there’s an air of community and belonging which drifts along the broad colonial era corridors and is buoyed up by the sound of children’s laughter as they play brusquely in the forecourt garden amongst shattered roof tiles, empty paint cans, plastic household detritus and recently hand washed tattered clothing. She is in a painful state of disrepair and until recently this wasn’t a problem. What was once home to one family now houses up to six, perhaps more. Times have changed in that respect, but the well-worn route from their front door to the colonial stairway and down into the Brazo de Mompós River permits one to conclude that the Dovales family and those lodging in this colonial mansion still benefit from plumbing dating back to the 17th century. I know for a fact, that they still draw water from an original earthenware tinaja propped up in one corner of the kitchen.

The authenticity of Mompós is undoubtedly one of the major draws for international tourists to this town and I say this as ably as I am permitted – as a foreigner and an outsider – that Mompós is special in that it stands apart from other more visited colonial towns in Colombia due to the simple fact that it still belongs to the Momposinos. This permits the town to retain its original flavour and at the same time continue to play an important central administrative role in the Depresion Momposina.

However, the week prior to Semana Santa, when Nazarenes don heavy tunics and march through the night to austere catholic rhythms and bugle calls, there have been demonstrations in opposition to the announcement of punitive increases of up to 300 per cent to the unloved Predial property tax here.

Previously no one really paid much attention to the Predial, given the lack of institutional presence in this colonial backwater, there were few repercussions to such indifference just as there were precious few street lights (functioning at least), inadequate sewage systems and rutted streets. Taxes were neither collected nor spent.

Why an increase of 300 per cent? Well, it’s precisely down to the fact that there were so few institutions in Mompós and the Instituto Agustin Codazzi – in charge of the Predial – failed to increase the town’s avaluo catastral or tax valuation over a period of many years. I’m sure this is happening all over Colombia, but there are questions remaining as to why this increase couldn’t be staggered over a period of several years and what are the potential knock on effects.

Simply put historic Mompós families such as the Dovales, if indeed they are economically aware that in general houses located in national heritage towns sell on average for 20 per cent more than the market rate, will end up recognizing that the opportunity cost advantage of selling their house will outweigh the costs of maintaining the property now that they have to pay taxes. And in one swift motion dictated by the intricacies of hedonic pricing, out will go the Dovales, pushed to the other side of the autopista where the fees are low, and with them disappears a tiny portion of Mompós’ authenticity. How frequently will this occur within the 45 square blocks and three parallel streets of Mompós’ colonial centre?

Will the new owners, seduced by this mansion benefitting from river views, in a recently restored area of town, located equidistant to both main plazas, understand the importance of the Brazo de Mompós to the former owners?

Will they leave the kitchen as it is now, unchanged from how it was during the filming of the 1987 film of García Márquez’ Chronicle of a Death Foretold? The table and chairs collect dust as if in silent homage to the very spot where Santiago Nasar’s murder was planned. This is both a garciamarquian and Dovales history. These memories will likely be plastered over as a luxury boutique moves in, as it is only they who can manage a 300 per cent increase in taxes year after year.

Perhaps we are witness to the final generation of original Momposinos to inhabit the colonial centre. There will undoubtedly be an evolution in the dynamic of the town once all of the retired teachers and state sector workers who are able to cash in government pension cheques to pay for such expenses pass away and leave vast empty homes to their children who in turn wish to leave the town for pastures new or, who have neither been able to procure meaningful education nor employment with which to maintain a sprawling home of this nature.

One thing’s for certain, that under the current and potential future tax implications in Mompós and indeed Colombia, we are going to witness a societal change in terms of home ownership but not benefiting to many. Unfortunately, all of these changes appear to herald much of the same and only are benefitting of the few. It’s business as usual then in Colombia?