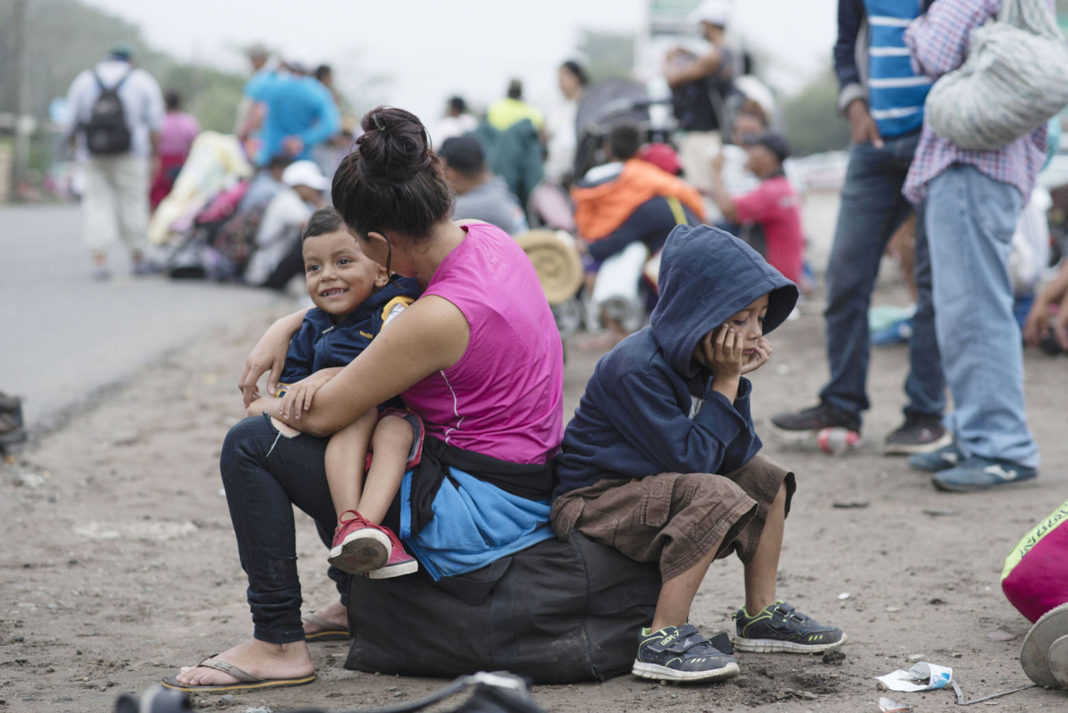 There is no doubt that Central America, like so many other parts of the hemisphere, is besieged by abject poverty and social inequality. Gang-related crime is also endemic to the region’s largest cities and capitals, and as the migrant caravan reaches the U.S southernmost border, news networks are scrambling to the latest frontline of human misery.

The video footage of families camped roadside in central Mexico is visually poignant as many are fleeing economic conditions not caused by drought or the fact that their governments can’t feed them – as Central America is an agriculturally abundant territory that supplies much of the produce that reaches consumers in the United States and Canada. So while we should feel always compassionate for the young, the elderly, escaping abject poverty and hunger, much closer to home, in neighboring Venezuela, dying of starvation has become an everyday reality for the poorest of this oil-rich nation.

The migrant crisis at the U.S border comes at a momentous time for President Donald Trump and to a much lesser degree what Latin America has been grappling with during the last two years with the Venezuelan diaspora.

While no South American nation would threaten to deploy the military against asylum seekers streaming across porous borders, the 7,000-strong caravan headed stateside has been condemned by Trump as an “invasion,” and orchestrated move by left-wing governments to create turmoil at a time in which the largest economies of Latin America have elected right-wing presidents. Brazil, with populist Jair Bolsonaro the most recent example.

Just over a decade ago, Latin America was entrenched with socialist governments, with Venezuela’s strongman Hugo Chavéz intent on keeping it that way, bankrolling Argentina’s Cristina Fernández de Kirchner, Bolivia’s Evo Morales, Peru’s Ollanta Humala and Ecuador’s Rafael Correa. Even Chile, known for a long dictatorship under Pinochet had elected a moderate socialist with Michelle Bachelet. Bachelet, however, managed to keep an arm’s distance from Chavéz’s cronies, steering her country down a centrist path. Colombia’s Álvaro Uribe Vélez, however, was the odd man out, as the Bolivarian Revolution hijacked regional attention. Brazilians with Luiz Inácio Lula da Silva of the Workers’ Party believed 21st Century Socialism would ride their country of poverty, crime and political elites. Then, they succumbed to a wave of corruption, and South America’s largest economy began to implode. Da Silva’s successor, Dilma Rousseff couldn’t return the luster to Brazil’s tarnished reputation, and as crime spiraled out of control, the center caved in. Bolsonaro, a former Army officer, now accuses arm-chair socialists of destroying his country and has hailed Trump’s nationalist agenda as an “example” to be replicated in the southern hemisphere.

The U.S President can now add Brazil to his list of regional allies for having voters renounce 21st Century Socialism, and a nation that has also received the brunt of the Venezuelan exodus.

The left in Colombia may have been beaten at the polls in this electoral round, with candidate Gustavo Petro, but are guaranteed to cry foul at every policy decision Iván Duque makes over the next four years, especially those aligned with U.S foreign policy.

At a moment in which the US Army is being deployed along the Mexican border, Trump’s anti-Latino remarks didn’t convince voters at the mid-terms as Democrats took back the House of Representatives, as well as many governors’ races. Anti-migrant rhetoric plays straight into the hands of Maduro, and “perfect storm” for the last remaining dictator in South America to manipulate a humanitarian crisis in order to give the entrenched leftists of the hemisphere their final word.

Essay: Is Colombia “Trapped by the Impossible?”