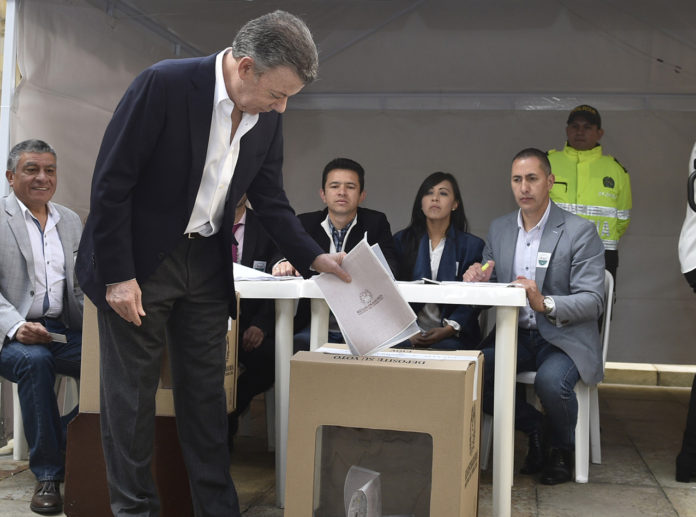 As President Nicolás Maduro launched last month his Petro cryptocurrency, Venezuela’s real currency, the Bolívar, was being used to light fires along the Colombian border. As a staggering mass of humanity sweeps towards Colombia’s overland border posts Paraguachón, in La Guajira, and Cucuta, in Norte de Santander, the country is witnessing a humanitarian crisis that is now being compared to Syria, and the desperate plight of Myanmar’s Rohingya in Cox’s Bazaar, Bangladesh. As Venezuela’s economic and political condition began to deteriorate last summer, some 500,000 Venezuelans have turned up in Colombia, and a million refugees are expected to arrive this year. In Cucuta alone, 3,000 cross the Simón Bolívar bridge everyday without documentation.

Colombia is not equipped to handle a humanitarian crisis of this magnitude, and even though in Bogotá the effects of this migration have yet to be felt, anyone who has taken TransMilenio recently may have received a crisp 100 Bolívar note from Venezuelan youngsters asking for a few pesos in exchange. The situation in Venezuela is desperate, and as U.S Secretary of State Rex Tillerson remarked during a brief stop over in Bogotá last month – “heartbreaking.” But, the buck stopped at the Casa de Nariño, and despite a firm handshake with President Santos, and a stoic appreciation of Colombia’s efforts in receiving refugees, the crisis along the Venezuelan border remains a domestic issue in regards to U.S foreign policy in the hemisphere. While Santos has tried to contain the situation by deploying 3,000 troops along a porous 2,200 kilometer border, as well as restrict day passes that have allowed Venezuelans for the last year to buy food and other necessities, the harsh reality remains that refuges are not turning back, because, simply, there’s nothing to return to. Sleeping on Colombia’s streets is a better option than the prospect of living under despot Maduro, and in a country that has run out of food, medical supplies and, worst of all, hope in its future.

The humanitarian crisis comes at a catastrophic time for President Santos. With approval ratings at an all time low, and only three months to go before Colombians head to the polls to vote for a successor, many on the center and right fear a sudden in flux of Venezuelans with dual nationality may, eventually, favor the political left, especially a recalcitrant left, represented by the populist former mayor of Bogotá Gustavo Petro. Others believe that younger Venezuelans, those who were educated by Cuban teachers under Hugo Chavés’ Bolivarian Revolution, and who have never known a different political or economic system than Chavismo, could be recruited by the country’s illegal armed groups, not just out of economic necessity, but by ideological conviction.

During a recent Armed Offensive by the National Liberation Army (ELN) when the fifth round of peace talks were suspended in Quito, several guerrillas who died when detonating a bomb under a bridge in Norte de Santander were identified by Colombian security forces as Venezuelans. Last month, the Attorney General’s Office released numbers that show a marked increase in criminal acts perpetrated by Venezuelans in Colombia during the month of January. According to the Fiscalía General, police arrested 1,869 Venezuelans in the heat of the crime, and a 230% increase over 2017.

As 30,000 Venezuelans enter everyday with Mobility Cards, and some 700,000 are entitled to apply for dual citizenship, unless there are real labor opportunities for migrants, Colombia’s centrist political establishment could veer, in the not too distant future, towards entrenched socialism, especially if demagogues seize to their partisan advantage, the disenchantment of millions of dispossessed and disenfranchised.

The political future of former FARC, now rebranded as the Revolutionary Alternative Common Force, has flatlined after the former guerrilla commander and presidential candidate Rodrigo Londoño, alias “Timochenko,” underwent heart surgery early March and his organization that waged war against the Colombian state for more than a half century has faced the wrath of protestors. Without a candidate for the May 27 presidential elections, support from the “hard left” has consolidated with Petro as an official candidate. On Sunday, after the final vote count of the legislative elections, Petro with Colombia Humana party was ratified by his base with 2,8 million votes. While a recent Guarumo poll, reveals that Petro and right-wing candidate Iván Duque are in a technical tie, results from Sunday’s election shows a clear shift towards the right with Duque chosen as the official candidate of Centro Democrático party and sweeping more than 4 million votes. The high vote count from both the right and left shows how deeply polarized Colombian society remains 18 months after the peace plebiscite.

Recent events, from Brexit to Donald Trump, have shown us that we cannot underestimate political risk. If Petro has this country on alert given his capacity to polarize and capitalize on class divisions, then the May 27 presidential election is a momentous turning point for Colombia. Recent attacks by ELN and a Venezuelan diaspora pouring across bridges will require more than honorable talks and good intentions. As hardline socialism encroaches on the Casa de Nariño, individual and collective rights are potentially at risk. Let’s hope reason – not populism – gets the upper hand in these historic elections.

Zika: From tragedy to an opportunity for women’s rights