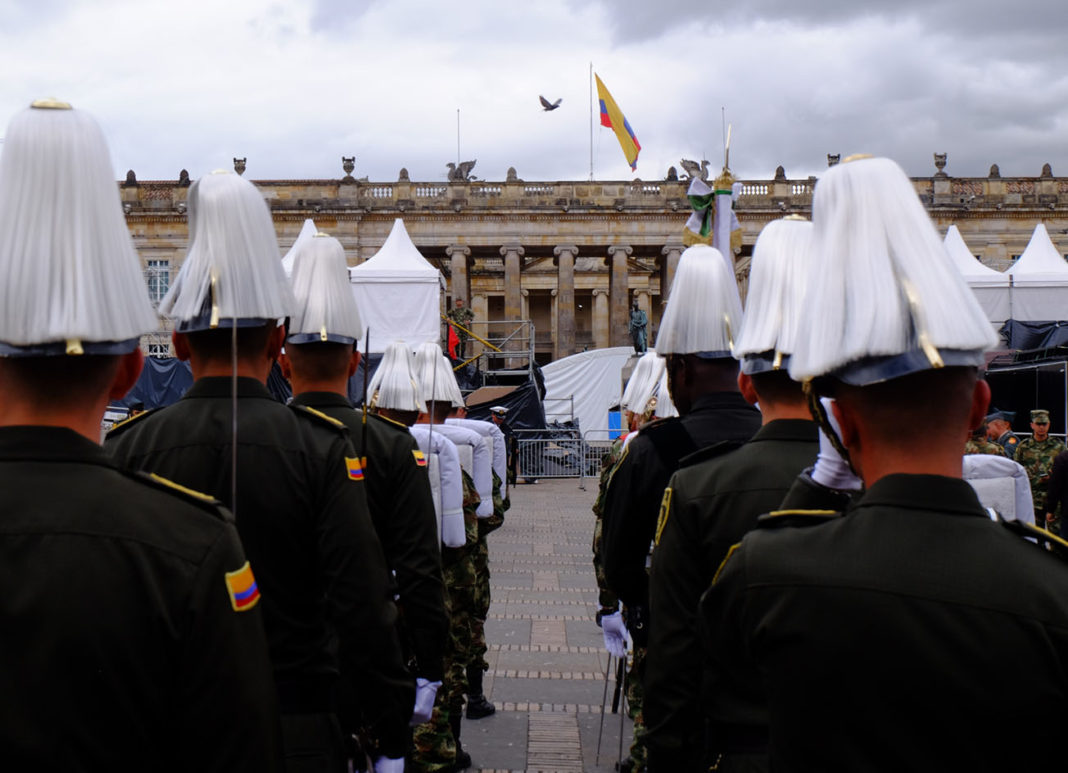 I always find it amusing when I am referred to as “doctór,” title conferred to someone who is a physician or has earned a doctorate degree, even though I got as far in my academic studies to receive a Bachelor of Arts in History. A life in academia wasn’t in my cards, so I picked up a camera and started taking pictures, which I believed was my vocation. After a series of twists and turns, I found myself assigned to cover the 1990 presidential elections in Colom- bia, in which Liberal candidate César Gaviria was the clear frontrunner, after his political mentor Luis Carlos Galán was gunned down during a campaign rally on the outskirts of Bogotá by the Medellín cartel.

To say that “a lot has changed in Colombia” in the 28 years, since the Pereira-born politician assumed office, is a gross understatement, especially when it comes to how we cover a presidential hand-over. The Foreign Press Association, to which we all belonged, was an international consortium of sorts, made up of freelance photographers, stringers, wire reporters and bureau chiefs whose prestigious newspapers – all U.S-based – paid the wages of drivers and secretaries. Every several months, the international press team in the presidential palace would summon us to the Casa de Nariño for breakfast with a minister and even President Gaviria, himself. Even though the hunt was on to rout-out the most wanted man in the country, Pablo Escobar, we were never in hurry to nish the scrambled eggs and almojabanas, served on bone china by white-gloved waiters. Getting “the scoop” was a collaborativeffort, forged by the friendships we made through the late Tom Quinn, a veteran of the foreign press corps, and during many a late-night terrace cocktail parties hosted by David Marcus of the Dallas Morning News.

Those of us in the association who didn’t own state-of-the-art technology, such as a fax machine, relied on the bureaus to help transmit our stories over a phone-line, when the phone actually worked, as the country faced rolling black-outs. The country’s communications entity, Telecom, did have phone booths in Unicentro, where one could dictate several paragraphs to some intern who landed his rst job in a cubicle overlooking Sixth Avenue because on the 5:33 to Poughkeepsie, he met someone “who knew someone at TIME.”

When we weren’t handing over a week’s wages to Telecom at the exorbitant rate of a US$3 dollar a minute phone call, the real challenge was explaining to the counter girls the concept of “reverse charges,” especially as no one spoke English.

Sending one photograph of Gaviria blazoning the presidential sash took the entire day, from the moment we entered the Plaza de Bolívar at dawn, to the final byte that flashed on the screen of a deputy picture editor in New York, who missed his 7:29 train to Larchmont, all because of “Columbia.”

The death of Pablo Escobar on October 3, 1993, by Colombian security forces, marked the beginning of the end of Gaviria’s presidential term, and a year later, the Liberal party’s former campaign manager, Ernesto Samper, was entrenched in the Casa de Nariño. Months after his inauguration, and attended by Cuba’s Fidel Castro, Samper’s agenda of investing in rural infrastructure, highway construction, and encouraging the construction of a metro for Bogotá was stumped after wiretaps revealed extensive campaign nancing by the Cali cartel, a scandal that resulted in Samper having his visa to the United States cancelled. The Samper years were tough on us photographers as the story was hardly visual, so we focused, instead, on Colombia’s energy-rich future. Samper’s embattled presidency meant coffee and cookies with the press had to wait, and gradually, asthe story began to move elsewhere, mainly the Middle East, so too, the bureau chiefs.

By the time Andrés Pastrana was sworn into office on August 7, 1998, Apple had arrived on the scene as well, with a bubble-shaped Macintosh that could send articles and pictures via email. Pastrana’s presidency was one photo opportunity after another, beginning with the no-show of FARC’s senior commander Manuel Marulanda Vélez, alias “Tirofijo” (Sureshot), at the official ceremony in San Vicente del Caguán that marked the start of negotiations to end 35- years of conflict. The talks that took place in a demilitarized zone the “size of Switzerland” (favorite catch phrase used by the foreign press), came to an abrupt halt in 2001, fuelled by decades-old mistrust and FARC’s warmongering. But pictures of FARC rebels brandishing AK-47s as they patrolled gritty jungle towns are an invaluable record of Colombia’s search for peace.

Now, roll the reel 16 years forward, or two Colombian presidencies (including two terms of Alvaro Uribe Vélez and Juan Manuel Santos), and Iván Duque had stepped up to the plate as one of this country’s youngest leaders. While the photo “moment” was marked by a wind storm and speech inaugural speech delivered from underneath an umbrella,  over the next four years, technology will continue to play its part in getting news from Colombia out there. And maybe, after 26 years of making headlines, editors around the world will finally get the dateline right: “Colombia”.