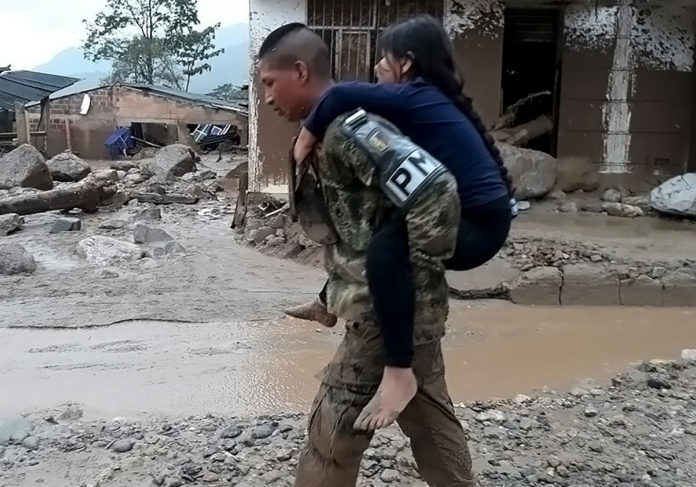 The avalanche that pummelled Mocoa, capital of the Putumayo department, on April 1 killing some 300 people with dozens still reported missing, shows us again how vulnerable we are to exreme weather.

In the worst mudslide this country has seen since the town of Armero was obliterated on November 13 1985 by a catastrophic mudflow caused by the eruption of the Nevado del Ruíz volcano, no matter how many alerts are re- leased by the state warning of extreme flooding and the threat of landslides, rural communities in this topographically fractured nation, will be at risk. Besides the staggering loss of life in one southwestern Colombian city, the onset of the invierno (tropical winter caused by rising water temperatures in the Pacific Ocean) is far from over, although from high altitude Bogotá, the weather may seem benign.

The people of Mocoa are very much in our thoughts during these early days of the tragedy and the outpouring of sympathy and solidarity with the victims of this calamity by fellow Colombians shows how imperative it is to stand together as a nation, even if the peace process divides us. The dedication of the many first responders also shows how incongruous political divisions are when trying to rescue people in need.

Days before the landslide in Mocoa, another tragic event that shocked Colombia found some measure of closure, when pedophile Rafael Uribe Noguera was sentenced last month to 51 years in jail for the death of 7 year old Yuliana Samboní. Yuliana was the only daughter of Juvencio and Nelly, subsistence farmers from Cauca forced to migrate to the capital by the internal violence in the countryside in order to give their intelligent little child a better life. The brutal murder of Yuliana on December 6 by an affluent architect turned sadistic predator managed to sidetrack all interest in – or disdain with – the peace process with FARC.

Even though Uribe’s life sentence won’t ease the pain of the Samboní, some sense of justice was served, showing that when Colombia’s legal system needs to work, it does, especially with cases involving the most vulnerable. Yuliana was laid to rest in the hills of Cauca, on the ancestral land of the indigenous group to which she belonged – the Nasa.

The story of Yuliana, and current suffering of the Mocoans, show us that we are living a time of solidarity as a nation, and as far as perceptions are concerned, images of soldiers and police hauling the elderly on their backs or washing down dogs trapped in the rubble are removed from the ingrained stereotypes that Colombia is a place where only bandits and outlaws roam.

Times are tough and there is plenty of pessimism going around after the government unleashed a barrage of new taxes at a time when the economy is under-performing. If we could only relegate Odebrecht to the dustbin of corrupt “has-beens”, and finish the public works at hand, that are meant to connect us as a nation, then perhaps President Juan Manuel Santos’ second term won’t be held up to ridicule when Colombians elect their next leader in 2018.

While Venezuela is being crushed by the weight of its own autocracy and its democracy can’t be salvaged as long as President Maduro tear gases the opposition, our other neighbours seem to be prospering with economic growth, while remaining as vulnerable as Colombia with extreme weather. After a contested general election, Ecuador appears to be easing towards a political center with the mild-mannered 64 year old Lenin Moreno, ending a decade of Rafael Correa style populism.

Encouraged by what is happening regionally, the prospect that next year’s election campaign in Colombia could threaten to turn back the clock on many pressing issues – most notably the peace processes with both FARC and the ELN – is daunting. Let’s hope the ghosts of administrations past don’t scrap consensus building for populism, for this would be a recipe for disaster, and one that only reinforces a false per- ception that we live in a rouge nation, rather than a kind one.

This edition marks our ninth anniversary and as we have done now for eight years now, it’s been our tradition to extend a heartfelt ‘Thank you’ to all our readers and advertisers. Without you, this great publishing initiative for Colombia would not be possible. Gracias!