Last year saw price hikes across the economic spectrum. This year doesn’t seem like there’s going to be much of a break for consumers and first-time homebuyers either. Even as the government keeps inflation under control, Bogotá in recent years has catapulted from being one of the least expensive capitals to the top of the region’s rankings.

To live here is to pay more for a meal, an apartment and public services than living in Santiago, Mexico City and Buenos Aires. It may come as a surprise that the cost of living in this nation’s capital is higher than that of Amsterdam, Toronto and Dubai according to the 2012 Mercer report, which placed Bogotá at 53 of the 214 cities.

The ranking by Mercer is more than a game of numbers. To live in Bogotá is to bear the brunt of high prices: everything from renting a studio apartment to buying groceries at your local supermarket. The square meter for a new apartment in Rosales or Santa Ana can be priced at $8 million pesos, or roughly U.S. $4,500. Take then a 100 sq meter apartment and you are looking at U.S. $450,000 with a 30 percent down payment.

Some new apartments over the city’s circunvalar have their meterage priced at $11 million pesos. Then you have the costs of “soft” culture and items, such as going out to a restaurant or buying tickets for a concert. In a country where incomes are not increasing at the same rate as the cost of living, some question how long Bogotá can sustain a cost of living that begins to match New York City.

The influx of oil dollars from Venezuela as well as large-scale investment from other markets is changing the dayto-day spending realities of Bogotanos. The country’s banks have played a part in driving up the debt by easing credit. While this has helped the automobile sector sell more cars, it’s a precarious policy when it comes time to pay back loans.

Facing economic slow down in exports from the country’s industrial sector, the central bank lowered this month its lending rate a quarter of a point to 4 percent. With inflation hovering near 3 percent and a currency which performs strongly against the U.S. dollar, Colombians have been swamped with new imports thanks to low or no duties on foreign goods. Driven by their new-found financial freedoms, Bogotanos are increasingly spending more on foreign items and travel. While there is an urge to see the world, the conclusion is that at home, the cost of life is taking the shape of “bubble” about to burst. 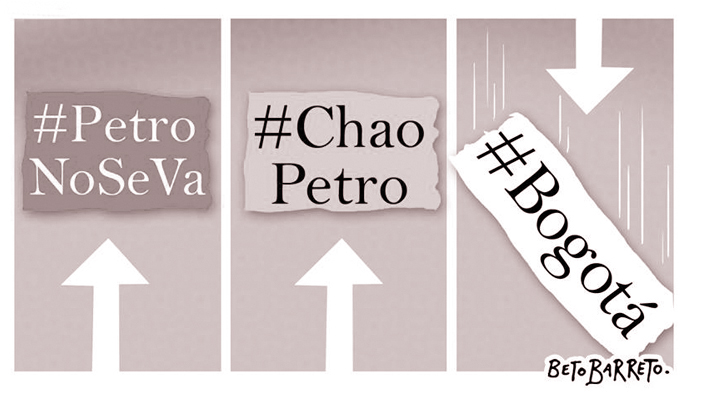