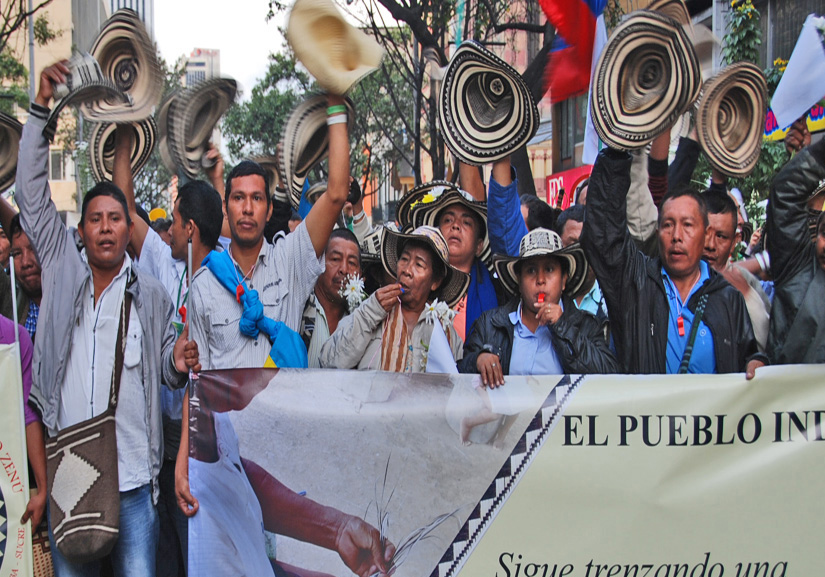 I have an aversion to marches – a mix of apathy, laziness and hostility. I never in my life thought I would participate in anything called “a collective protest.” Until Wednesday.

I have always felt that marches are manipulated and that the issues that are intended to be defended pass into the background as unionists inevitably descend on these rallies defending their own rights and that far too often, have nothing to do with the actual protest – and many more movements, with a few exceptions, end up defending something that was not on the agenda.

However, during the last 10 days I have attended two.

I haven’t been lazy and did not hesitated for a minute, because for the first time I felt I had to do something. But not knowing really what to do, I headed to the Plaza de Bolívar, the capital’s main square. I was guided by one principle: I have more of a voice demanding my constitutional right to live in peace by hitting the pavement than sitting at home watching television.

Nobody is obviously interested in hearing what an ordinary citizen has to say, so my only option is to support the kind of march where a segment of society cries out in unison for something. Wednesday night’s march in Bogotá had a very clear objective: pressure all parties to reach an agreement and sign the peace with FARC – the oldest guerrilla group in Latin America and that has caused the worst bloodshed of the continent’s recent history.

After a four-year long process, where both the government’s negotiators and guerrilla were able to reach an agreement that seemed impossible just a few years ago, it was time to ask Colombians whether they approved the peace agreement or not, and on a fateful Sunday October 2 – to the horror of many of us – another war was born in this country. One of words, not weapons.

Part of the population thought that as long as FARC demobilized and ceased kidnapping, extortion, taking entire villages, burning trucks and all possible atrocities, they were willing to compromise on things such as allowing the guerrillas to participate in politics, not spending time in jail for two years and could receive 70% of the monthly minimum wage while they returned to civilian life.

The other half of the country believed it was unfair that they were giving benefits to a blood-thirsty guerrilla – the worst kind imaginable – and therefore would vote “No” to an agreement. It would be better to have “business as usual”, in other words, follow through with the war than any other outcome.

With these extra-polarized positions the campaigns began on both sides, and no one could have imagined it would be a dirty war of lies and misinformation. On the day of the plebiscite it rained in much of the country, which predicted a low voter turn-out, and as Colombians have been historically bad track record exercising their democratic right to vote, it so happened, that 65% of all eligible Colombians did not vote.

We will never know if it was the weather, laziness, apathy or indecision … whatever the reason, more than half of Colombians did not bother to go out and have their say in what many consider, was the most important political moment of their lives, because the country was not electing a politician, for better or worse – disappearing from the scene in four years, but rather “taking a gamble on life” as many celebrities chirped with opinion-fatigue.

The afternoon of October 2 was perhaps the most bitter many Colombians have had to endure since war with FARC began more than a half century ago. As someone who has experienced the loss of a very close family member to the conflict, hundreds of people began to cry overcome by grief that they had lost the only real opportunity in their lives of finally living in a country at peace. Contrasting these emotions, those who voted “No” cheered, because they were convinced they stopped Colombia from becoming a “new Venezuela” – meaning they had stopped the advance of communism with a ballot.

As the first 24-hours passed with the plebiscite, leaders from both the “Yes” and “No” camps were not prepared for this surprising outcome and confessed that there was no “plan b” on the table. The government hoped that a “Yes” victory would immediately implement the agreements reached with FARC, and the opposition, in the hands of former President Álvaro Uribe, was so sure of their own defeat, that they didn’t even bother to have a strategy in case of did actually win.

The peaceful march I participated in touched my soul. So many people, all so different, all asking for something as basic as being able to go to sleep at night without the anguish of being killed. Our many diverse indigenous groups, so badly beaten by the conflict, received flowers from city dwellers who asked them for “forgiveness” for  having abandoned them during the worst days of the conflict. It felt like all of us were helpless in not doing enough to end this war. The indigenous groups accompanied carnation-carrying Bogotanos down the Séptima, incredulous, and thankful.

I wanted to know what they were really thinking, so I asked them and they said they were very grateful to the people of the capital for this welcoming, but I kept asking myself: “what are they really thinking?”

Young and old, and from all social levels, pleading to stop a senseless slaughter, was chilling and thrilling at the same time. When the national anthem rang-out, everyone started singing, many with tears streaming down their faces. I do not know if they were tears of joy or sadness .. I just know there much so much emotion going around.

Last night, after seeing so many people shouting “We want the peace!” I felt that this great clamor can no longer be ignored. The government has to understand that although it “lost” at the ballot, it cannot throw in the towel and must keep fighting to reach an agreement. The opposition must also understand that even though they “won” half the country does not support the idea of continuing this war indefinitely, until one day a perfect agreement surfaces – because make no mistake – that’s impossible.

FARC also has to understand that this result sends them a clear message: It’s still too early for Colombians to forgive them for the many atrocities they committed, and even if they are willing to apologize, it may not be enough. But what happens now? Nobody really knows. The mass marches will not achieve anything if the opposition wants to renegotiate the impossible with FARC. Meanwhile, I will continue to march, because I think it is all I can do to exert some pressure. If we are too lazy and locked in our homes, all parties involved will feel that Colombians have resigned themselves to live another 50 years of war. And I cannot imagine that I could die without ever having lived a single day of peace.

About the author: Olga Helena Fernandez has covered the Colombian conflict for two decades as a television and print media journalist.

Essay: Is Colombia “Trapped by the Impossible?”