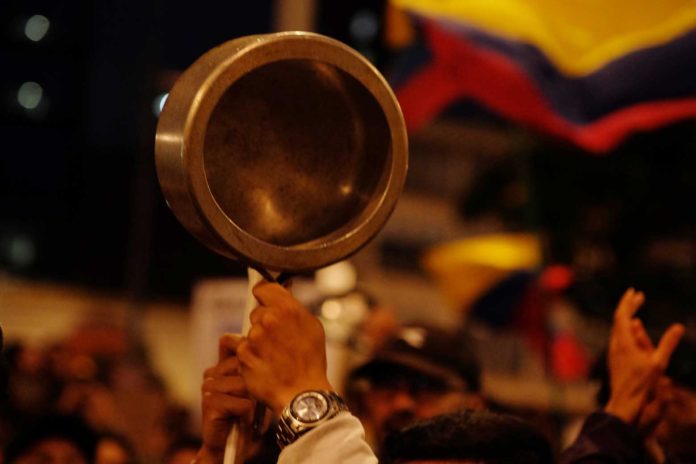 An estimated 10,000 anti-government protesters took to the streets of the Colombian capital on Wednesday to support the second General Strike day of Paro National, which on Thursday, completes one week.

As marches concentrated in Plaza de Bolívar, the capital’s central square and scene of last week’s violent confrontations between vandals and the Bogotá Police, on Wednesday, the square filled with students, educators, workers and representatives of the country’s many civic organizations. Other demonstrators marched along the city’s main North-South artery – AutoNorte – and concentrated near one of the city’s main business and commercial hubs, the Calle 100.

In Chapinero, a crowd of some 3,000 gathered in Parque de los Hippies to hear musicians from various music academies and orchestras perform traditional Latin American folk music, under the baton of the Russian conductor Guerassim Voronkov. In what was called a #cacerolozosínfonico, the musicians were accompanied by a cacophony of metal pots being banged by the supporters of a Paro that was marked on Wednesday by peaceful protest.

While many marched and lit candles to the memory of slain high school student Dilan Cruz, shot by the National Police’s Anti-Riot Squad on Saturday during demonstration on Calle 19, for many thousands of Bogotanos the march continues, not because of political affiliations, but because the city’s public transportation system, TransMilenio, has all but collapsed forcing tired employees, children, elderly, handicapped, to cover great distances in order to the reach their homes in the darkness of night.

In Medellín, Barranquilla and Cali the marches were carried out peacefully with isolated vandalism reported by the police.

While Bogotanos opposed to the government policies of President Iván Duque marched and hoisted banners with anti-government slogans, Mayor Enrique Peñalosa and President Duque presided over the official signing of the Bogotá Metro concession. In a ceremony with the directors of the Chinese-Canadian consortium that won the bid to build the city’s first overland Metro – scheduled to break ground early 2020 – President Duque received a vote of confidence from the Chinese Ambassador Wy Wei, who remarked: “My Government has all the confidence and faith that the Colombian Government and Colombian people can overcome the difficulty they are experiencing.”

Among many personal tragedies experienced by ordinary Colombians during seven days of protests, the Paro Nacional has resulted in 350 members of the National Police injured and 140 civilians; the majority of whom were attacked during the riots that flared-up on the first day of the Paro Nacional.

The most recent victim of the national strike is 43-year old Arnuldo Veru, a police officer in Neiva, department of Huila, who was critically injured when a protestor threw a potato bomb that struck him in the face. Patroller Veru supports both his mother and younger sister financially. Veru’s mother has not abandoned his side since he was injured trying to control masked delinquents at University Suramericana. According to companions of Veru, “he is a quiet man, accessible, and very sympathetic to the community.”

If Veru doesn’t survive his injuries, he becomes the first policeman to die in the line of duty during the Paro Nacional.

On Wednesday, President Iván Duque reiterated the Constitutional right of peaceful protest, and without mentioning Gustavo Petro, former Bogotá Mayor and current Senator by name, stated that political “arsonists” were fueling the flames of popular discontent to “win with violence what they did not win at the polls.”