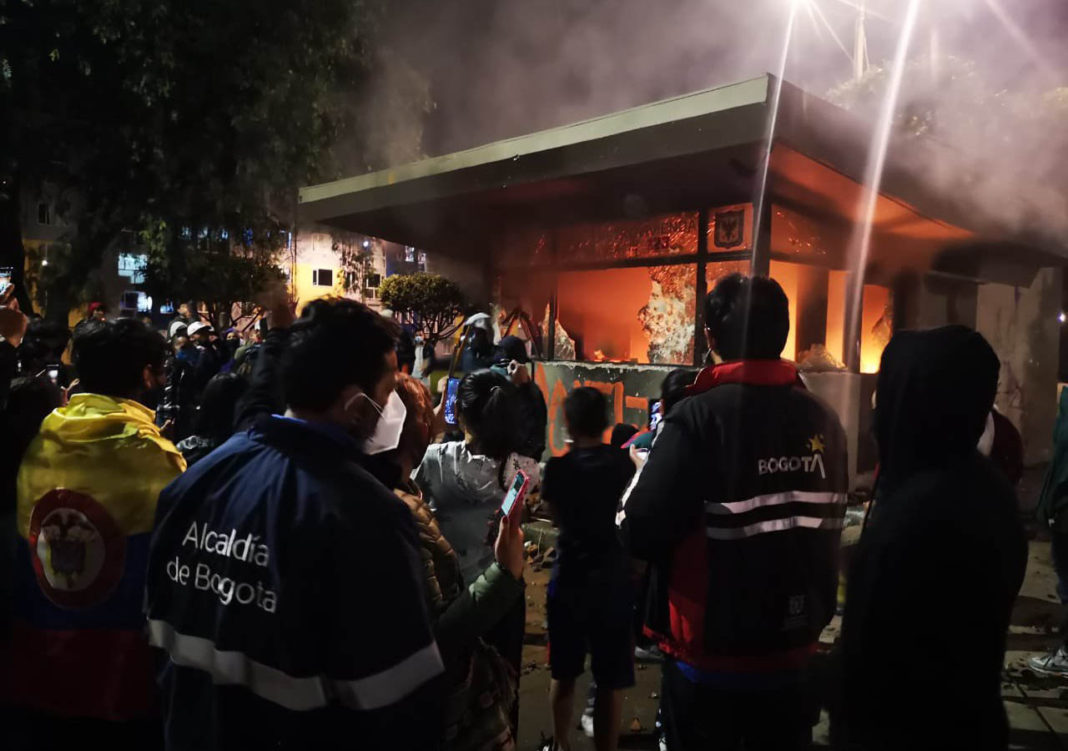 Mayor Claudia López lifted almost every coronavirus restriction for Bogotá on Monday after a month in which residents were ordered to stay home. The sudden decision to eliminate the identity card measure Pico y cédula, as well as lift a scheduled three-day quarantine (Friday May 7 to Monday May 10), at a time in which the capital’s ICU occupation reached 92%, to a large extent was a concession to the great majority of the city’s eight million residents who were respecting health measures, while thousands of demonstrators took to the streets to protest the national government’s tax reform.

But protests against a bill that was withdrawn by President Iván Duque before it even was debated by lawmakers have increasingly turned violent as mobs of vandals terrorize residential neighborhoods at night, loot shops and attack the city’s transportation infrastructure.

As Paro Nacional completed its first week on Tuesday, truckers continue to barricades roads and highways leading to every major city in Colombia, including Bogotá, and which blocked the safe passage of an ambulance yesterday transporting a pregnant woman to a hospital in Bogotá from the nearby satellite community Tocancipá. In complete violation of humanitarian law, the woman ended up losing her baby.

As food begins to deplete inside the capital’s central depot Corabastos, Mayor López had no alternative to eliminate the mobility restriction Pico y cédula, given that access to supermarkets has to be a priority with the real threat that Bogotá could face a run-on essential supplies, including gasoline, should Paro Nacional continue the blockade.

Even though López has insisted that the Colombian capital does not need “military assistance” to control public order, on Tuesday evening, vandals targeted several police command stations – CAIs – and in the locality of Usme attempted to set fire to the building where 15 police officers were trapped inside.

In a sharp about-face, as violence in the south of Bogotá was spiraling out of control, Mayor López requested support from the military to protect dozens of other CAIs, and lives of inmates inside a detention center, under threat from being destroyed by criminal gangs.

The situation of public order in almost every Colombian city is so desperate that President Duque may be forced to declare a State of Internal Commotion (Conmoción interior) to quell an uprising that appears, now, to have one narrative from strike organizers: to continue indefinetly. Legitimate denouncements by human rights organizations of excessive force used against demonstrators by the state security forces, and calls for resolution by foreign governments, hasn’t deterred hate speech and inciteful activism on social media. Spammers are also diverting constructive discourse on Twitter by infesting hashtags with insipid videos of K-pop.

The International hacking collective “Anonymous” confirmed responsibility on Tuesday for bringing down the internet pages of the National Army and Congress Tuesday, and attempted also to disrupt the official site of the Presidency of Colombia. Anonymous also changed the biography of Defense Minister Diego Molano on Wikipedia referring to his work experience as “professional assassin.”

During the riots on Tuesday night in the Colombian capital that resulted in 91 injured, among them, 19 members of the Metropolitan Police, Mayor López pleaded on Twitter that “All violence must stop now!” Luis Ernesto Gómez, the district’s Government Secretariat also released footage of police officers receiving medical help from first responders for their injuries.

Words, however, that for many residents of the capital appear to be too little too late given that anti-government protests are continuing on Wednesday – and like every other day of Paro Nacional – have ended in confrontations with the Mobile Anti-riot Squad ESMAD. The attempted burning of 15 police officers was also confirmed by Mayor López: “The scenes of pain, anger and violence that we saw last night are inadmissible.”

Reeling from the horrific events of Tuesday night, Bogotá’s TransMilenio will shut-down on Wednesday at 3 pm forcing commuters to leave work early, to reach their homes before the start of the obligatory coronavirus curfew, and security situation that increasingly appears to be silencing moderate voices, from politicians, to journalists, trade union leaders, the medical community, civic organizations, and majority of Colombians who demand a return to peaceful protests.

— As marchers return to the streets on Wednesday, protests in Bogotá are being conducted in peace, accompanied by a motorcycle convoy and percussion ensembles.

— The TM stations that remain operational are thronged with commuters waiting to reach their destinations.

— Mayor López visited the Kennedy Hopsital to talk with youngsters injured in the riots. López will also visit the Central Police Hospital to check-on the health status of the injured officers.