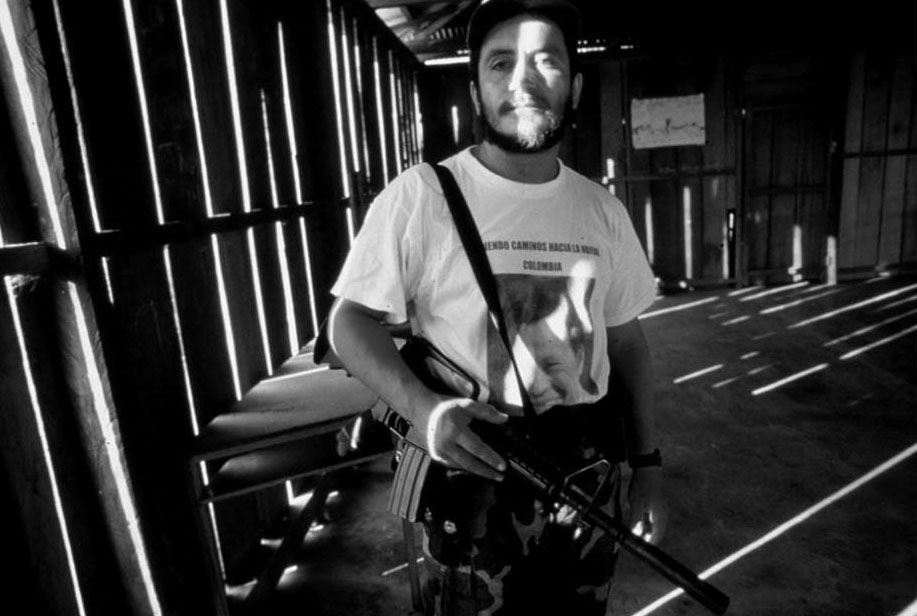 It was a war that lasted too long, and with every passing year, the age of the combatants seemed to decrease.

During one of the worst decades of this 52-year internal conflict, the 1990s saw the rank-and-file of the Revolutionary Armed Forces of Colombia (FARC) swell with young men and women, taught to fuel class hatred, and sacrifice their inexperienced lives for one of the world’s oldest insurgencies.

For so many years, Colombians grew weary of their war, flashed every night on two of the country’s television networks, with images of dour-faced teenagers crouched among blades of grass, and clutching their trophy AK-47s. Then, the streams of olive green guerrillas marching through towns with names such as Maipiripán, Cartagena del Chairá, El Retorno, scattered across the eastern plains, and a dense, humid region of Colombia few could claim to know.

During the late 1990s, the war between FARC and the Colombia that wasn’t under their control got so bloody, that the nation crossed a Maginot Line in suffering. Soldiers who had been captured during FARC’s many offensives were caged behind barbed wire deep in a jungle, out of sight, but visible with proof-of-life videos that surfaced on the news feed.

At midnight, messages were broadcast to loved ones on the radio show “Las Voces del Secuestro” (Voices of the Kidnapped) and not even animals were spared when the FARC set their sights on taking a town. Donkeys with pipe bombs strapped to their backs were set loose to explode in front of white-walled police stations barricaded by mountains of sand bags.

At the height of the internal conflict, millions were on the move fleeing the countryside. Cities were the only safe havens and grew exponentially in size. Slums were absorbed into the inner city and the constant flow of the displaced, meant more hillocks had to be razed to make room for more bricks and mortar.

By 1999, Colombia’s war had reached a mid-life crisis and with the kidnapped numbering in the thousands, the recently elected government of conservative president Andrés Pastrana decided it was time to talk peace with the rebels and authorized a zone the size of Switzerland to be demilitarized. The then maximum commander of FARC, Pedro Antonio Marin, alias “Manuel Marulanda” decided not to turn up for the much anticipated start of these formal talks, leaving the president widowed on a wooden stage in San Vicente del Cagúan.

Born into a peasant family in central Colombia, in 1930, the rebel leader earned his nickname “Tirofijo” which translates as “Sureshot” for his military prowess and old-style guerrilla tactics. His political beliefs centered on power, taking power, through hit-and-run tactics, essentially turning Bogotá into a besieged city. Power outages were common when FARC attacked the nation’s electrical grid. Roads leading from Bogotá to nearby towns became the target of en route, en masse hostage taking – the grainy photographs of people being escorted into captivity, and seen waving goodbye from behind a blockade of abandoned cars, made the front page of the next day’s news.

President Pastrana’s “laboratory of peace” mutated into an incubator of FARC’s war machine and journalists wanted to see it up close. A press pass in the Cagúan granted some kind of access to the field commanders who were holding Colombia ransom. The only way in – or out – to San Vicente was an erratic connection via Neiva, on Satena airlines. After a four-hour delay in the departmental capital of Huila, I touched down on an empty airstrip in guerrilla-held territory.

I discretely migrated out of the hangar and headed to Residencias Monte Carlo, the motel of choice for war correspondents. After an eight-hour journey to cross a mere 300 kilometers of Andean foothills, I found a candlelit restaurant facing the main square with men slumped over bowls of soup. The air was thick with suspicion, and as the only person not slurping sancochito all eyes turned on me. Then a pattern began to emerge in the dark. Che Guevara was among us. His imprint on the black t-shirts of an all male and morose clientele.

The following morning as I was prepared my camera gear, the receptionist knocked on my door. I was told that there was someone wanting to “talk to me.” Strange, I thought to myself, as my only footprint was a hurried strut to a restaurant-turned-guerrilla canteen.   As I stepped into the bright morning light, a man in camouflage asked to see my identification. After examining my Black Star Photos press credentials, I explained to the small, bearded man that I was a photographer on assignment for TIME “de Nueva York” and had arrived too late for formal introductions.

Commander “Iván Ríos” was the prodigy of FARC’s Central Command. As both thirty-somethings, he seemed curious, first about me, then the nature of my picture taking. He told me to get inside a blue SUV and that we would “take a ride.” But first, he needed to check his yahoo account and register me as a member of the foreign press who had voluntarily turned-up among them. After carefully scrolling through emails with an AK-47 always within arms distance, this philosopher-turned-field commander asked me if I would like to visit a guerilla check point on the edge of town.

The roads leading from San Vicente del Caguán were trails cut into a lush countryside and that served the guerrilla to move combatants from one front to the next. As he manoeuvered a landscape of green in a matchbox-size SUV, “Ríos” began to map my ideological DNA. “Do you believe Colombia is a just country?” came the first in a barrage of questions. Like a professor with a captive audience, “Ríos” liked debate, and I, that strange afternoon, his nervous subject. “If you’re Canadian, you must be a capitalist,” was one conclusion. Marx and Hegel were permanent references in a monologue that covered plenty of potholes and I listening from the passenger seat a discourse on social injustice.

When we managed to arrive at the first of many FARC check points on the road to Los Pozos, young recruits were patting-down farmers and mulling over identity cards. I took as many pictures as I could, knowing that an opportunity like this would most likely not come my way again. I was right.

After thirty minutes at the retén, “Ríos” needed to do another round. This time, check in on a nearby camp with some 40 fighters. It was close enough, he assured me, and I would be free to take more pictures. “I am sure it will be a very negative interpretation of us,” claimed this commander, who was born 1961 in Colombia’s Putumayo region as Manuel Muñoz Ortiz. “But go ahead anyway and just do a good job on your assignment,” he said.

“Ríos” opened up the camp to me and instructed the combatants to go about their daily chores even though their was an ideological anomaly in their midst. “Maybe you will enjoy our campfire songs,” said “Ríos” as he inspected tents.

I managed to photograph guerrillas flipping arepas and getting ready for roll call. “Ríos” then wandered into a cold stream to brush his teeth. In a war that took your life at a moment’s notice, here was one homme du guerre who took hygiene seriously.

I sat ringside next to a burning pit while the young recruits dutifully sang their evening repertoire of “When the people shall rise up” and “Our rifles shall never be silenced.” Having grown up in an English boarding school resounding to “Jerusalem” and “I vow to thee my country,” I commended the combatants on their harmony, and recommended they don’t take lyrics too literally.

As night began to fall, and dinner drying on the grill, “Ríos” said it was time to take me back to familiar terrain. He would use a short cut to San Vicente, as he was low on gasoline. As we sped through fields blanketed in fireflies, our only compass the stars above and an annoying glow of the red dashboard light, warning us that we were running on silence, and on empty. It seemed the right metaphor for a long day’s journey into night.

“Ríos” dropped me off at steps of the Monte Carlo excusing himself that the following day he would be tied-up with paperwork, emails and resolving “things that needed to get done.” That was fine with me, as I needed a day to detox from the marxist overtures.

Several days later, as I was heading to the airport, I saw “Ríos” standing in front of San Vicente’s category one hospital. I asked the cab to stop, and approached him. He seemed  in tatters. “Can you believe it?” he remarked angrily. “Believe what?” I responded. “Four of my men were injured in car crash last night and they are dying. I asked the Colombian military to transport them to Neiva and save their lives, but they refuse to send me a helicopter.” As someone on the fringes of this war, and soon departing it with a seat on the next plane out, I was at a loss for words. “And they weren’t even in uniform! They just skidded off the road!” he continued. “I told the military that they can be sent to jail if they live, but I still get no response.” The stern commander was now in tears. “For God’s sake! They may be guerrilla, but they are still Colombians!”

Then “Ríos” stomped into the emergency ward and I darted-off in my cab. In a few hours, I would be home in Bogotá, and the FARC camp a fleeting memory. The next time, I saw “Ríos” was on the front page of El Tiempo. He was shot March 3rd 2008 near Salamina, Caldas, by his security chief, Pablo Montoya.

Authorities identified “Ríos” when Montoya surrendered a laptop computer and severed right hand. Biometrics proved the hand belonged to the ideologue of the secretariat and a mutilated body was recovered three days later. To keep the memory of one of their most loyal and politically active members alive, the FARC renamed one of their most belligerent fronts – the 34th – “Bloque Iván Ríos.”

This front that has operated in the Urabá region since the 1990s and halted the advance of paramilitaries in the banana-growing region, now joins all others in a historic demobilization that ends May 31 when the last weapon of the 6,300-strong guerrilla will be handed over to the United Nations. And maybe somewhere, among these war-weary combatants, someone might have remembered never to take songs too literally –  rifles can be silenced.