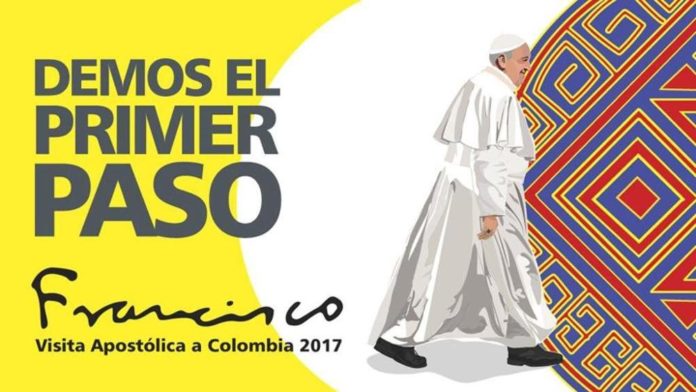 In a communique released Friday from the Holy See, Pope Francis will visit Bogotá, Villavicencio, Medellín, and Cartagena on a six-day trip starting September 6.

The Apostolic Trip comes almost a year after the government and the Marxist guerrilla of the Revolutionary Armed Forces of Colombia (FARC) signed an historic peace accord last November.

The visit marks the third time Pope Francis has visited his native South America since becoming Pope, but the first to Colombia as Pontiff. The trip was officially presented in the country March 10 by Bishop Fabio Suescún Mutis, head of Colombia’s military diocese and who is in charge of the preparation committee.

In December, Pope Francis met with Colombian President Juan Manuel Santos and former two-term president Álvaro Uribe Vélez, at the Vatican, to encourage them to continue working for peace.

Upon receiving confirmation that Pope Francis will visit Colombia, President Santos remarked: “We will receive the pontiff with open arms and hearts, as a messenger of peace and reconciliation.”

The Pope has repeatedly asked Colombians to reconcile their differences over the peace accord, stating that “the goal of attaining the peace and reconciliation […] are at the heart of Latin American culture.”

“The Holy Father is a missionary for reconciliation,” said Bishop Fabio Suescún. “His presence helps us to discover that yes, it is possible to re-unite as a nation in order to learn to look at ourselves again with eyes of hope and mercy.”

The Vatican’s Apostolic Nuncio, Monsignor Ettore Balestrer, stated that the visit of Pope Francis just to Colombia, instead of including the country in a multi-nation agenda, is not usual and “shows the importance that Francisco attributes to Colombia.”

Pope Francis will be the third pontiff to visit Colombia: the first was Paul VI in 1968, with a two-day trip, followed by St. John Paul II in 1986, who stayed for seven days. Based on previous visits, the Holy Father is expected to perform mass at the newly restored Eucharistic Temple in Bogotá’s Parque Simon Bolivar.