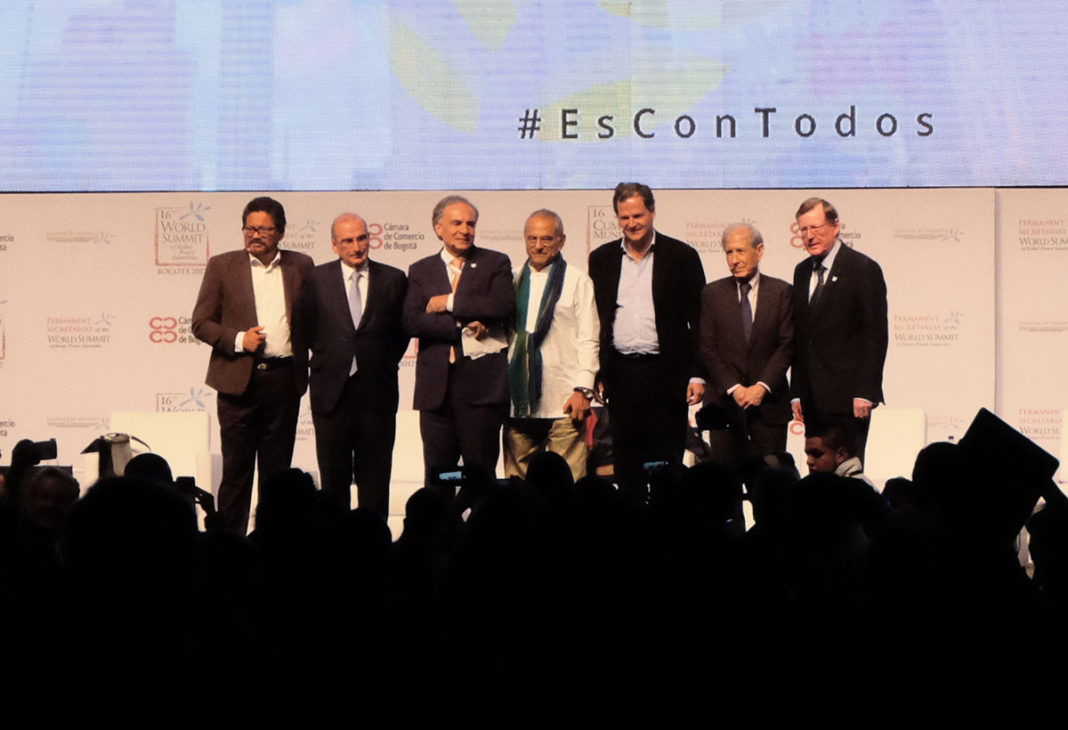 In their first joint public appearance since signing a historic peace accord in November, the top negotiators from the Colombian government and the Revolutionary Armed Forces of Colombia (FARC) urged Colombians on Friday to take an active role in the implementation of the peace deal and reject calls to “undermine the peace process.”

The government’s top negotiator Humberto De la Calle, the High Commissioner for Peace, Sergio Jaramillo, and the FARC’s chief negotiator Iván Márquez, whose appearance was not announced before the event, exchanged reflections on the four-year-long peace negotiations during a panel discussion at the World Summit of Nobel Peace Laureates, an annual conference that is widely touted as the most important peacebuilding event in the world.

“In any other country, there would have been dancing in the streets with the end of a 52-year conflict. Why not here?” Jaramillo said. “War unites, peace divides.”

“We must keep hope alive,” Márquez said. “The destiny of Colombia cannot be war.”

“There is no good violence,” De la Calle said. “We have to erase from the minds of Colombians that political opinions can be expressed with violence.”

The panelists, which also featured Nobel Peace laureates Jorge Ramos Horta and Lord David Trimble as well as U.N. Colombia representative Jean Arnault, expressed the monumental challenges Colombia faces as it attempts to implement the peace accord, including guaranteeing the participation of marginalized sectors of the population, maintaining adequate supplies at FARC demobilization camps, and the risk of political factions who vilify, distort, or disrupt the peace process coming to power in next year’s presidential election.

“The 2018 presidential candidates must respect the peace process and the reintegration of the FARC,” Jaramillo said, who later acknowledged that the government “should have spent more time in Colombia trying to explain what we were discussing in Havana.”

“Sadly, there are people in Colombia who aren’t looking to solve our problems, but make them worse,” Márquez said, cautioning that the “implementation of peace will be more difficult than the arduous years of negotiations.”

Lord Trimble, who won the Nobel Peace Prize in 1998 for his efforts to end armed conflict in Northern Ireland, told the panel that one of the lessons he learned from his country’s peace talks was that “If any party is still seeking to achieve a (military) victory, a peace process will not work.”

Ramos, former president of East Timor and 1996 Nobel Peace laureate, added: “Without justice, there is impunity. With impunity, there’s no peace.”

Arnault, who was closely involved in the peace talks with the FARC, said: “The peace process’ test is its implementation.”

The panelists also recognized that women have been the most affected by the armed conflict.

“Women were the most affected by the conflict as mothers, wives, and daughters,” De la Calle said, adding that the peace accord “reaffirms the rights of women.”

Jaramillo added that the alleged inclusion of a “gender ideology” in the peace accords that was said to attack traditional family values was “a lie that many people believed.”

“The sector (of society) that has been most victimized are women,” Márquez said.

But despite the challenges of implementing the accord, all of the panelists expressed optimism, and, at times, raw emotion, about the accord’s prospects for success.

“I am sure there is the capacity to see your agreement through and Colombia will prosper,” Trimble said.

“Colombia can be a great oasis of peace in the world,” Ramos said. “Please don’t waste this window of opportunity.”

“The FARC’s march to the demobilization zones is not the final march, but the first great march of hope,” Márquez added.

“We must not let politics defeat peace,” Jaramillo said, citing “a lack of solidarity for the suffering of others” that has, to some extent, impeded the peace process.

“The peace process is not just the FARC turning over their weapons and responding for their actions,” Jaramillo added. “We all have to response for what happened if we want to heal our wounds.”

“I have six grandchildren,” De la Calle said, on the verge of tears. “I know they will die someday, but I want them to die of old age.”

In November, the Colombian government and the FARC signed a peace accord to end a 52-year war that has killed 220,000 people and displaced 7 million.