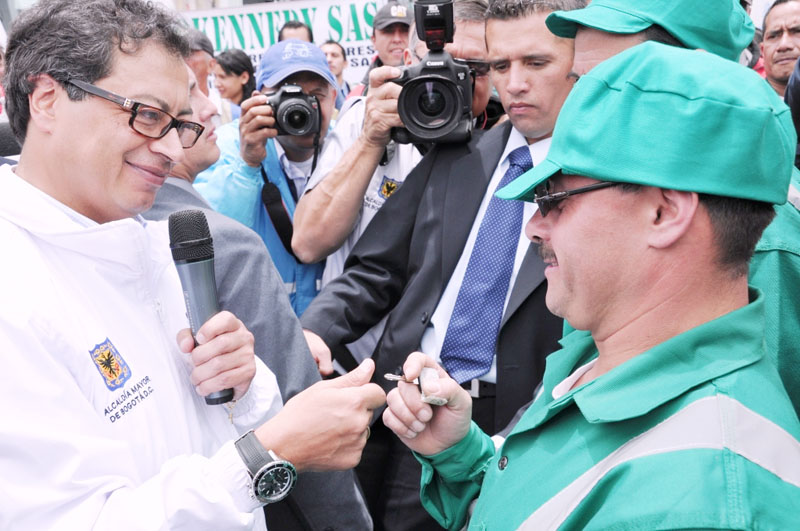 A month after he was ousted from office for mismanaging Bogotá’s sanitation services, things were looking bleak for embattled mayor Gustavo Petro. He had been unceremoniously booted by Colombia’s Inspector General and banned from politics for 15 years. His legal interventions had been rejected by the nation’s courts and even his supporters, who filled the Plaza de Bolívar by the tens of thousands the week he was dismissed, were losing steam. Signs proclaiming support for Petro were beginning to yellow in apartment windows and it looked as though the political career of this former guerrilla turned mayor was finally coming to an end.

Now, thanks to a barrage of legal interventions and a formidable public relations campaign, Petro seems poised to come out on top. His popularity ratings, at a record high of 58 percent, have gone up ten points since the Inspector General announced his sanction. Once simply the mayor of Bogotá, Petro has become a household name nationwide. Even in the northern reaches of Colombia, normally cut-off from the capital, Petro’s dismissal is a topic of conversation. In Corozal, a backwater town nine hundred kilometers from the capital, a sign in the town park proclaims support for Bogotá’s mayor.

“For now Petro is the victorious one because he has succeeded in stirring up the country,” says Armando Silva, a professor and researcher at the Universidad Nacional and Universidad Externado de Colombia. “He’s an agitator and he has taken advantage of these circumstances to agitate.”

Silva, like many in Bogotá, feels that Petro’s sanction was an appropriate response to two years of mismanagement and a botched garbage collection scheme that left a city of 8 million people without trash removal for three days. While Petro has focused his government’s funds and energy on improving the lives of the city’s poorest, he has largely neglected the rest of Bogotá’s neighborhoods. Populist measures like free potable water for the poor and lower public transportation rates have done little to assuage the concerns of many residents related to chronic traffic problems and security.

What makes this issue so complex— and so polarizing—is that there is some truth to the narratives on both sides. While Petro’s critics laud Inspector General Alejandro Ordóñez for getting rid of an incompetent mayor, Petro’s supporters accuse Ordóñez of political persecution. They claim the ultra-conservative Inspector General violated democratic principles by ousting an elected official and compare him to a Spanish Inquisitor on a liberal witch hunt.

“This is violating the rights of voters,” claims Fernando Hernández Valencia, the Executive Director of Corporación Nuevo Arco Iris, an NGO dedicated to promoting peace and democracy in Colombia. “It’s violating Mayor Petro’s right to due process because didn’t supply the necessary conditions, the proof.”

Part of the problem is that the laws governing the Inspector General’s powers are open to interpretation. The Disciplinary Code grants Ordóñez the right to investigate and sanction public officials for a laundry list of infractions that range from “not carrying out duties” to violating international humanitarian law. The list is ten pages long and includes 67 separate offenses, many of which are vaguely worded in a way that invites subjective assessments.

There is some debate as to whether these powers apply to the mayor of Bogotá, however. Julio César Ortiz, one of Petro’s lawyers, claims that only the president can oust the mayor of the nation’s capital. “The Constitution has a system in place for the capital of the republic that puts the president in charge of this function,” he explains.

Colombia has also ratified the American Convention on Human Rights, which stipulates that elected officials can only be removed if convicted by a judge in criminal court. In the Colombian legal system, ratified international treaties form part of the Colombian Constitution, making them equal to the highest level of national law.

Although few would argue with the fact that Petro mismanaged the transition of the city’s garbage collection from private companies to a public system, it’s unclear whether or not his actions constitute legal infractions. Ordóñez has accused Petro of violating the principle of free enterprise and endangering the health of Bogotá residents, claiming that the mayor’s poor planning left 6,000 to 9,000 tons of garbage on the streets.

Ortiz says these allegations are “absolutely ridiculous” and entirely subjective. “Three days without trash pick-up is not enough time to produce vectors like rats, flies and leachate, the substances of decomposition that can facilitate the spread of disease,” he argues.

Another point of contention is the severity of Ordóñez’s sanction. While former mayor Samuel Moreno Rojas was only suspended for a year after being accused of accepting millions in bribes, Ordóñez banned 53-year-old Petro from politics for 15 years, effectively ending his political career.

If Ordóñez was after the mayor for political reasons, however, his strategy has clearly backfired. Petro has taken advantage of this situation for political gain, convening protests and giving incendiary speeches from the balcony overlooking the Plaza de Bolívar. In one such address, the day he was ousted, Petro tied his plight to a history of violence and persecution against the left and referred to the city’s main plaza as the “Tahrir Square of Colombia.”

Silva believes Petro’s team has intentionally created the polarization that has followed his ousting as a political ploy. He says Petro has taken advantage of the media circus to make this issue a political affair, when it should have simply been a question of legal sanctions. “Petro traded the mix of bullets and the exercise of popular power for the mix of media and cameras,” he explains. “The entire establishment has succumbed to Petro and they’ve turned him into a figure who is almost a martyr.”

Fed up with what it terms a “soap opera,” the national magazine Semana recently published a plea asking the mayor to leave populism out of the equation and let the courts decide. Unfortunately, it doesn’t look as if the courts will reach a decision anytime soon. Three days after Petro was ousted, the mayor’s supporters inundated the courts with tutelas, a legal mechanism through which Colombian citizens can defend their fundamental rights. In what the mayor’s public relations guru dubbed a “tutelathon,” nearly 800 supporters sent tutelas to the nation’s courts, arguing that Petro’s dismissal violated their fundamental right to exercise political control.

Judges have issued conflicting rulings on individual tutelas, deciding some in favor of the mayor and others in favor of the Inspector General. The most recent decision, on January 23rd, suspended the sanctions against Petro until the administrative courts, whose dominion is conflicts between the state and citizens, come to a final decision. The Inspector General has appealed this ruling and it is now up to the judges in the highest administrative court to decide.

Petro also has the right to file a lawsuit challenging Ordóñez’s decision. Ortiz says Petro’s legal team plans to sue in the coming weeks, but adds that the lawsuit could take up to twelve years, finishing long after the mayor’s term has ended.

Ironically, Petro’s fate also depends on a recall election that was originally conceived by National Representative Miguel Gómez as a way to get rid of the mayor. Depending on the results of the election, this measure could end up saving Petro’s political career.

According to Gómez, Petro has used the current crisis to maintain his hold on power. “He is taking advantage of a strong institutional crisis here in Colombia,” he says. “I think Colombians have realized what type of personality he has. He’s using all of the instruments of the state to make fun of Colombia’s institutions. He is willing to do anything and capable of anything to stay in power.”

Gómez has spearheaded citizen participation in deciding Bogotá’s uncertain future by collecting the necessary signatures to demand a recall election. In addition to hitting the streets and drumming up support for Petro’s ouster, his campaign also employs social media as a means to get people to vote. “There’s still hope that everything will be resolved with the recall vote,” Gómez adds.

For many in Colombia, the implications of Petro’s dismissal extend far beyond the fate of this particular politician. Supporters of the peace process between the Colombian government and the Revolutionary Armed Forces of Colombia (FARC-EP) have expressed concern that the Inspector General, a vocal critic of the negotiations, is using Petro’s dismissal to send a message to other would-be-guerrillas-turned-politicians that there is no space for them in national politics.

“This is a clear attack against the peace process,” explains Hernández of Corporación Nuevo Arco Iris. “It’s clear that here there’s an ideological bent and that is, in a sense, staging an offensive on behalf of the conservatives.”

On the other hand, Petro’s supporters have hoisted an M-19 flag in the middle of the Plaza de Bolívar, recalling not only Petro’s former guerrilla affiliations, but also a bloody history. The M-19 was responsible for invading the Supreme Court in the 1980s, killing over 90 people. At a moment when proponents of the peace talks are urging the country to move forward, invoking this history—whether intentionally or not—could be just as damaging to the peace process.

Petro’s legal battle could also have serious implications for the Colombian judiciary system and the Inspector General’s Office. If the courts overturn Ordóñez’s decision, that legal precedent could limit his ability to oust other officials in the future. This might not be such a bad thing, however, since Ordóñez has thus far been overzealous when it comes to dismissing politicians. In his first term he sanctioned 828 mayors and 49 governors which, as Semana points out, amounts to an average of four mayors a week.

The degree of subjectivity permitted by the current Disciplinary Code— in which anything short of embezzlement is open to interpretation—clearly generates controversy. Until Colombia checks the Inspector General’s powers, this type of situation will undoubtedly repeat itself. Legal ambiguities that permit one official to serve as judge, jury and executioner are antithetical to a democratic society.

As for Petro, in a strange twist of fate he could come out of this whole ordeal with increased political prospects. Depending on the results of his legal battle, and the March recall election, Colombia could be facing years of rabble-rousing from the balcony.

Colombia extends vaccine coverage to persons age 60 and over