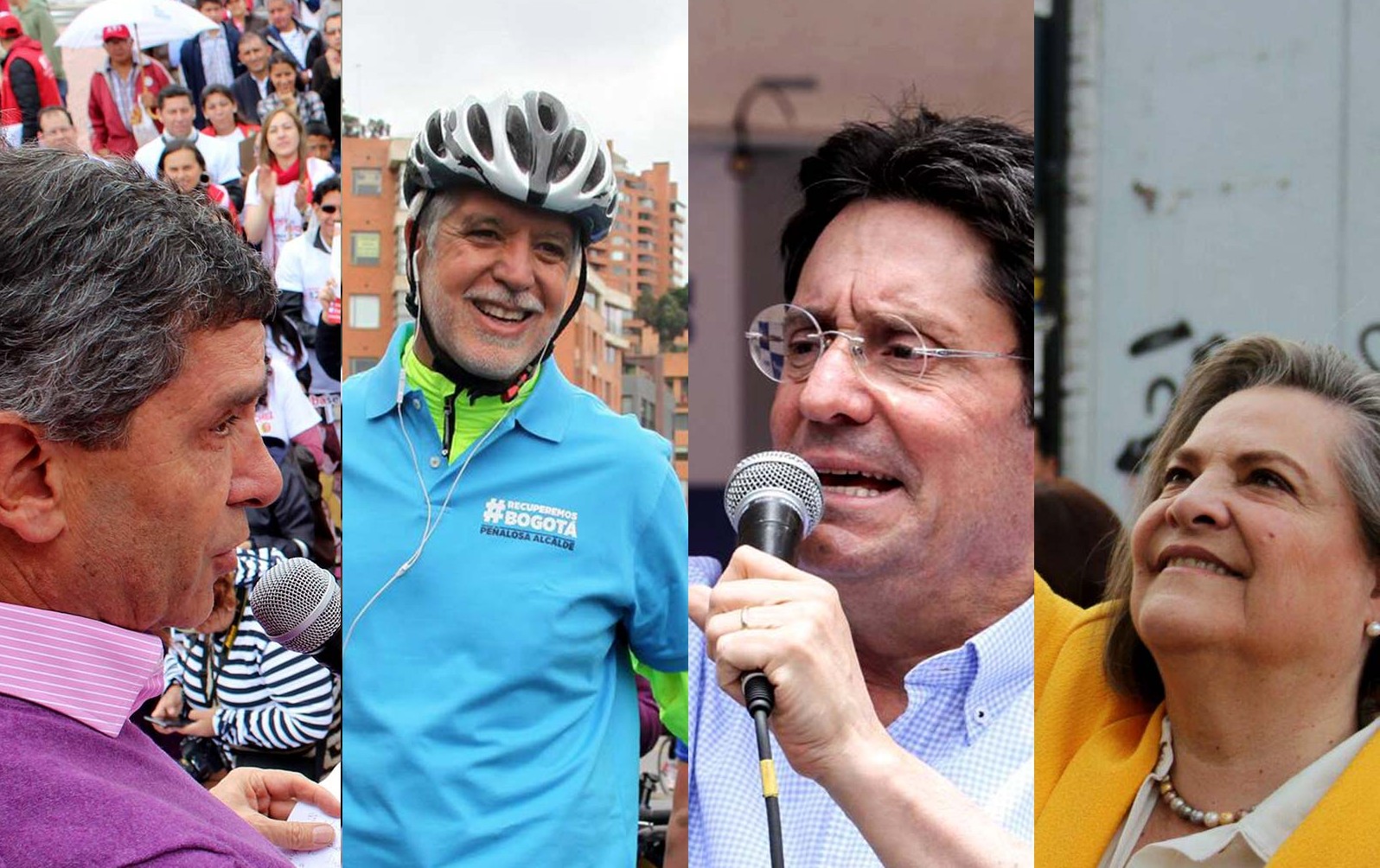 On Sunday, one of four candidates will clinch the country’s second-highest office: Mayor of Bogotá. Who are they? And what do they propose for this capital of 8 million people?

Independent candidate Enrique Peñalosa is running away with the mayoral race, holding 30% of the vote in the week leading up to the election according to a poll from the Centro Nacional de Consultoría. That was well above second-place candidate Rafael Pardo at 24%.

If expectations hold, the centrist politician will win the right to run the capital for a second time. Peñalosa previously served as Mayor of Bogotá from 1998-2001, but lost out in later campaigns in 2007 and 2011.

He is a specialist in city planning, and he oversaw the construction of the TransMilenio bus rapid transit system and helped institute the city’s “cicloruta” bike paths during his first term.

If elected this time, Peñalosa wants to improve transportation even further. His “Bogotá 2020” plan includes ways to integrate the city’s bus system so it is faster and cheaper, while building an east-west corridor to improve traffic conditions for those living in Suba, Engativá, Kennedy, Bosa and Fontibón.

In terms of security and health, Peñalosa hopes to push the justice system towards lower tolerance for criminals and construct 20 new healthcare facilities as he modernizes those that already exist through increased digitalization.

Liberal Party candidate Rafael Pardo has an extensive resumé in politics, and he held the position of acting mayor for three months after current Mayor Gustavo Petro was temporarily stripped of his position in 2014.

The former Minister of Labor in President Juan Manuel Santos’s cabinet is basing his campaign on improving Bogotá’s finances and towing the Liberal party line of creating an “all-inclusive” administration.

He envisions a more modern municipality, one better organized and open for business. This includes boosting neighbourhood police and creating a Guardia Urbana, a city-wide civilian security force.

Pardo has stated that he wants to clarify regulations to allow companies to operate more efficiently and expand public services on-line. His platform stresses citizen participation and — as someone who helped negotiate the peace process with the M-19 guerrillas — Pardo is perceived to be a mediator, someone who can reach across party lines, to reach agreements on contentious issues.

The candidate recently came out in support of the moratorium on bull-fighting in Bogotá’s Santamaría, signing a pact with an animal rights group and advocating for the permanent ban of the practice in the capital.

Pardo has high-level political chops, previously serving as the nation’s Minster of Defense in the early 1990s and as senator from 2002-06.

Clara López is a Harvard economist and University of Los Andes-educated lawyer who served as the acting mayor of Bogotá for six months in 2011 when then-mayor Samuel Moreno Rojas was ousted for his involvement in the “contracts carrousel” scandal. She wants to reclaim that position as the leader of the leftist Polo Democrático party.

Currently sitting in third place in the most recent poll with 19% of the vote, her campaign exudes a leftist vision of the city with a priority on education and improving the transportation gridlock.

López has stated that she would work to improve the quality of public education at all levels and ensure free university tuition for students who graduate from public high schools and continue on to the Universidad Distrital Francisco José de Caldas.

In terms of public works, she has promised to repair broken, pothole-ridden roads and add new services to TransMilenio.

Like Peñalosa, López also ran for president in 2014 and finished third with 15.2% of the vote. She fell short of a third-place finish by less than 40,000 votes and nearly doubled the number of votes received by fifth-place finisher Peñalosa.

López also served on the Bogotá City Council and, on the national level, held the role of Auditor General of Colombia from 2003-05.

Colombia’s former vice-president under Álvaro Uribe Vélez from 2002- 2010, and cousin of President Juan Manuel Santos, Francisco “Pacho” Santos is well known to Bogotanos. He is originally from the capital and transitioned from a career in El Tiempo’s newsroom to politics when Uribe was elected in 2002.

Known fondly as “Pacho,” the dark-horse is running for mayor as the conservative Centro Democrático candidate on a platform in which security comes first.

The issue of security is close to home for the candidate as he was kidnapped in the early 1990s during Pablo Escobar’s reign of terror. He has demonstrated a capacity to move masses, such as when he launched the anti-kidnapping “No Más” campaign. That movement prompted marches across Colombia condemning FARC and this ruthless tactic.

Santos he has also campaigned on an anti-drug message, claiming “drugs are killing this city.”

Francisco Santos and Álvaro Uribe are close political allies, and Bogotanos understand that a vote for “Pacho” is a vote for the country’s former commander-in-chief.

What do the “final four” propose?

The candidates have covered plenty of Bogotá’s turf, presenting proposals on how they would improve the lives of eight million. They are united in that Bogotá needs leadership and urgent solutions to key issues such as improved safety, air and water quality, mobility and infrastructure.

Enrique Peñalosa remarked recently to the press that Bogotanos had “lost faith in the city.” Once elected, he said he would restore confidence in public administration. Peñalosa has a very detailed public safety agenda with “zero tolerance”for crime. He would give the police the latest technology and expand the emergency help line 123.

Even though there was speculation that Liberal candidate Rafael Pardo could offer his support to Peñalosa in order to end POLO’s 12-year hold on the capital, Pardo continues to go it alone.

With just days remaining in this tight mayoral race, Peñalosa is reaching out to voters and has promised expand technical education and subsidize public education for students from estratos 1 and 2. He also envisions a bilingual city.

One of Peñalosa’s main environmental policy objectives is to clean up the contaminated Río Bogotá and make this waterway an integral part of the city.

The environment is high up on his competitors’ agendas as well. Pardo has stressed his administration “for the people” will allocate important funds to keeping the capital’s air clean, as well as the protection of a “green corridor” along the Cerros Orientales.

Bogotá’s finances must also be allocated for the social good. Building the Metro is a necessity, but it shouldn’t mean sacrificing investment in TransMilenio and the planned new route along the Avenída Boyacá.

Peñalosa’s metro would run above ground in order to reduce overhead cost and so that it can be finished during his term.

Having conceived and executed TransMilenio for Bogotá, Peñalosa is seen as someone who can get things done. Expect the mass transportation network to expand, along with more bike paths should this former administrator clinch the top post.

Clara López forges ahead with a campaign geared towards social welfare, development and more access to education. She is the natural successor to mayor Gustavo Petro, through the POLO party, although has tried to present a “new and improved” version of Bogotá, one of greater social investment and participation.

Access to education is a priority. López also promised to subsidize public transportation to students studying at a college or university level, regardless of their socio-economic condition.

She envisions greater involvement in the political and social life of the city for Afro-Colombians. The candidate would boost the budget of the city’s Institute for the Arts, IDARTES, in order to promote Bogotá as a cultural world capital and establish arts and crafts schools in marginalised neighbourhoods.

Like her fellow contenders, López, is committed to boosting security on the streets and would set up a Sistema Integrado de Emergencias y Seguridad (SIES), in order for first responders to better attend to emergencies.

As passionate about Bogotá as he is about football, “Pacho” wants “safe zones” throughout the city, especially within the public transportation system, parks and streets nears schools.

He has stated that Bogotá needs urgent and well-thought out infrastructure, such as the “ALO Ambiental’s” environmentally-friendly four-lane highway which would connect Chusacá in the south with the AutoNorte.

He would establish the first, fully-digital public University in Latin America.

All Candidates see eye-to-eye on the necessity of fundamental changes to the city and all have realistic and interesting solutions to the issues. The greatest challenge they face is convincing Bogotanos to cast their votes so that the next four years can offer a better quality of life for us all. 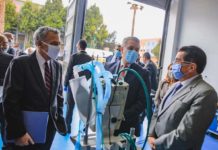 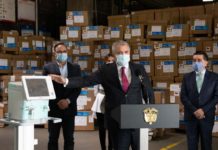 Coronavirus: Tragedy at the heart of Macondo