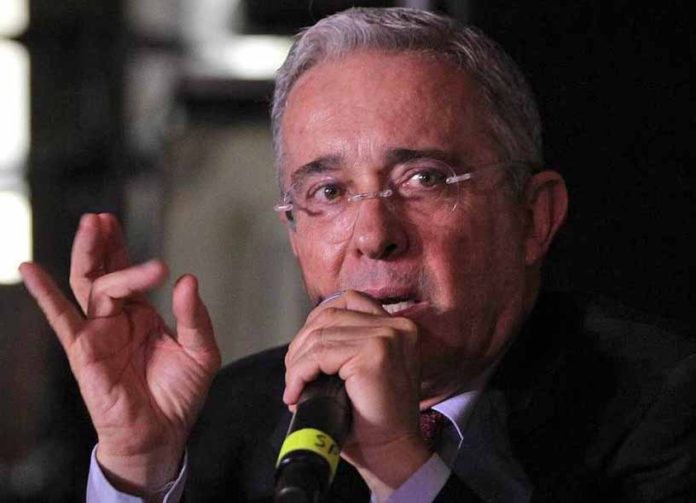 Colombia’s former two-term President Álvaro Uribe Vélez could have been released from preventive domicile arrest on Wednesday had a circuit judge handed down the decision based on the legal recourse that the case against Uribe Vélez is now in the hands of the Attorney General’s Office (Fiscalía General de la Nación) and not the Supreme Court.

Under the Colombian Constitution, the Supreme Court lost authority in the Uribe case when the former representative of the right-wing Centro Democrático party resigned his seat in Congress last month.

As a private citizen and under arrest by a tribunal without “competence,” the Attorney General’s Office must first open a new case against Uribe based on evidence handed over by the magistrates of the Supreme Court. The country’s highest court ordered house arrest to prevent the former legislator from tampering with evidence of his allegeded involvement with paramilitary activity as governor of Antioquia between 1995 and 1997. During those years, the department witnessed three massacres in the municipalities of El Aro, La Granja and San Roque, committed by members of the United Self-Defense Forces of Colombia (AUC).

A release from house arrest would not clear Uribe Vélez from charges of witness tampering and procedural fraud based on testimony by the former ex-paramilitary Juan Guillermo Monsalve, in which he claims, Uribe’s hacienda Guacharacas was used as training ground for the AUC’s Metro Bloc. Monsalve’s testimony forms part of a dossier compiled by Senator Iván Cepeda of the left-wing Polo Democrático party and which was presented to Congress. Uribe has categorically denied involvement in paramilitary activity, despite the allegations of Monsalve that the estate’s proximity to the sites of these horrific massacres implicate the former governor.

Uribe has accused Cepeda of coercing Monsalve into giving false testimony to smear his reputation in exchange for an early release from prison where he is serving a 15-year sentence for homicide and extortion. The procedural guarantees afforded to Uribe with the Fiscalía include a personal testimony which was denied by the magistrates of the Supreme Court.

Should Colombia’s highest law enforcement authority Francisco Barbosa determine there is sufficient evidence that Uribe knowingly authorized criminal activity on his rural estate, as a former Govenor, the case could return to back to the magistrates of the Supreme Court.

The circuit judge’s decision to suspend the hearing until September 22 is based on the interpretation of two laws: Ley 600 of the Supreme Court where the case was presented, and Ley 906 of the accusatorial criminal system.

Uribe Vélez is credited for having debilitated the Revolutionary Armed Forces of Colombia guerrilla by modernizing the country’s military capacity and orchestrating the release of hostages. The hearing in which Uribe faces imminent release comes after eight senior commanders of former FARC – including the Marxist organization’s maxminum leader Rodrigo Londoño, alias “Timochenko,” apologized to Colombians for their “extremely grave mistake” of kidnapping. “We understand the pain we caused so many families – sons, daughters, fathers, mothers, and friends – who lived through hell waiting for news of their loved ones, wondering if they were healthy and under which conditions they were held, kept apart from their affection, from their projects, from their world,” reads a statement.