Home News Jimmy’s Walking Tour of Bogotá: At so many Tchotchkes* so reels the...
Twitter
WhatsApp
Linkedin
Facebook 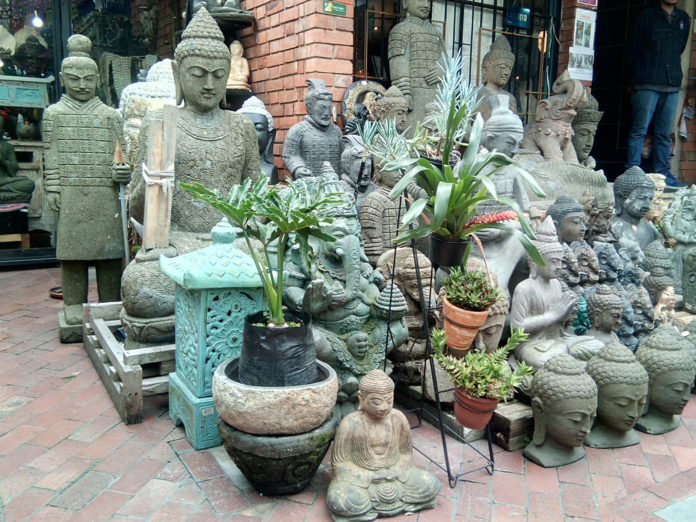 Now, window-shopping may be fun, but for your discriminating window-shopper, the standardized wares of the malls soon pall and he goes looking for the novel, the picturesque, the elegant. Hence, our expedition to the district of La Cabrera/El Retiro, starting, at the 7th with 79B, with our disappointing discovery that the so-called Calle de Los Anticuarios (curving downhill to the 9) now only houses a handful of antique shoppes. Instead, it has become a boutique land for the fine ladies of the North, evidenced by a cluster of three, dressed in designer jeans and foulards, one leading a miniature pet whippet. To remind me that reality is never far behind in Locombia, I was soon distracted by a family of Venezuelans, begging for lunch money (one of many around there).

“Location, location, location” is especially apt for a street which is practically an oasis in the midst of high rises, office buildings and the avenues, above and below, roaring with traffic. Built on a low scale, treed in the middle and walled in by the apartment blocks on adjacent streets, with many of its premises set back from the road behind hedges and forecourts (reserved for the cars of their customers), the ambit is ideal for the window-shopper. However, the merchandise itself struck me as being little more than a very expensive version of the downtown Pasaje de Rivas, with the same mixture of the utilitarian, the decorative and the useless, so heterogeneous I can only offer a feeble catalogue: fashion wear, baby clothes and buggies, Teutonic-faced beer mugs, Victorian bronzes and plaster casts, belts and handbags, perfumes and essences, lamp stands, chinoiserie, printed pillows, wrought iron garden chairs and buttoned leather sofas, hammocks, dolls and what have you.

Since real shopping is as tiring as the virtual kind, those same ladies can also repair to a parlor of fine teas, health food restaurant and spa, meanwhile parking their kids in the nursery school there. I myself was tempted by a modernized Recamier chaise longue in one shop window and a sleek oval porcelain bath tub in another on a second floor, with the idea that (window and all) it would win a lucrative prize for conceptual art. At the northern corner of the 9th, things improve with an outsized, blue (acrylic?) replica of my dog, Stuie.

Never mind that this private-public street sculpture is only a publicity gimmick for Le Collezioni fashion wear: your window shopper is not buying anyway. Heading north, and hopping a block, we turn up the 81st, whose displays are much the same as those seen before: perfumes in a bird cage, a 20 million pesos sofa set, a tall standing lamp whose reflective metal shade is faceted inside, five joined circular mirrors of different sizes, a yellow garden chair which swings from a chain, the 2nd floor ballet school opposite, etc., compensated for, however, by the Galería Hopulus, whose odd label of a “café brauhaus” is only explained when you enter and see, first, the apparatuses which roast
and grind its gourmet coffee and then, the little glass chamber crammed with stainless steel tanks where it brews its artisanal beer, served on tap from small metal jugs. It is the only place I know of which offers authentic salted pretzels, fresher and better than most from my native New York.

Back on the Novena, walking northwards again, I note the free-standing kitchen counters with inbuilt ovens at Bosch, a collection of fancy Panama hats and pseudo-tiger-skin belts in another shop window and the Formula 1 driver’s space suit alongside the latest model in the BMW Store: indifferently, however, because I don’t drive, bake or dress up.

Then, at the 81A, I hit pay dirt: a stunning array of exotic, outsized statuary in the forecourt of the Tienda de Cristales: Buddhas, seated and reclining, warriors from the buried terracotta army of the first Emperor of China, Easter Island idols, Ganeshes and leonine door stoppers, among others (a few small). They are all manufactured in Bali and though they seem to be carved out of stone, are either made of cast cement or fiberglass (hollow and much lighter than the first).

Yet, why in a crystals store? The answer was a serendipitous discovery its owner made on a worldwide search for the quartzes and other semi-precious stones which are displayed inside: hundreds, in all shapes and sizes, natural or cut or mounted in necklaces or earrings or pendants, with some nestled in giant seashells. Soñar no cuesta nada being the motto of the window shopper, I added an obsidian skull and a couple of tall, fat quartz obelisks to the chin-high warrior in my shopping cart (cheap at 11.5 million, I thought). They also offer a variety of tarot decks, manuals on Reiki, astrology, angels, etc. and, upstairs, some weathered Oriental cabinets and bookcases, along with courses on healing with crystals.

If, as in my case, window-shopping falls flat after that, you can cross the 9th and go celebrity-watching at Bagatelle, one of a score of excellent café/bakery/ pastry locales in the neighborhood. The Myriam Camhi on the 81st is another, but the glass-roofed outdoor terrace whose walls are covered with vine leaves makes the Bagatelle more comfy than the latter, a little ostentatious for my taste, though no less pricey. After spotting Betty La Fea’s fiancée (actor Jorge Enrique Abello) when we visited, the friendly security guard/maître d’ Pedro Rodríguez told us that Amparo Grisales, the lady Vice-President of Colombia and the t.v. sexologist Carmen Larrazabal were also steady clients. We recommend their wholegrain rolls (heated, sliced and served with butter) and cheeseburgers with French fries.

Heading north again, as we pass by the pair of enormous greyish-white horses at the entrance to P.F. Chang’s Chinese restaurant, we are once again struck by the way that the street sculptures erected by the private sector are much more appealing than the drab busts of Victorian nonentities the governmental one usually goes in for, a few examples of which are to be seen in the tree-lined traffic island of our next stop, the Avenida 82, where window-shopping and autograph-hunting give way to sight-seeing. At the top, near the 7th, there is the Liceo Cervantes, a Catholic private school housed in a stumpy monastic-type building, with contrasting white walls and blue shutters and doors. More or less opposite stands the Gun Club, the very exclusive preserve of the Bogotá elite, as indicated by its discrete brick exterior, few windows, no nameplate I saw at least, the Edwardian uniform of the bellboy outside and a virtual absence of photos of the building on Google Images.

Going west on the same side, we notice one of those huge mid-20th-century residences of the same elite which, despite a similar title (Club Colombia), is actually a public restaurant fronted by a splendid garden of trees and ground ferns. Then, a block short of the 11th, a gigantic food mixer machine on the sidewalk tempts us to window shop once more, at Kitchen Aid, which sells the genuine article, coffee-makers, stoves and blenders, and uniquely, I believe, a pasta machine with attachments for spaghetti, fettuccine and what have you.

Opposite is an office building which, but for the limp flag with a white world map on a blue background, is equally discrete about the location of the Colombian headquarters of the United Nations. Finally, crossing the 11th, we reach familiar ground, the offices of Villegas Editores, the world-renowned publisher of coffee-table books, whose store on the ground floor has what is probably the most extensive collection of illustrated studies of Colombian art, architecture, design, history, literature, landscapes and folklore you’ll ever find, short of the Library of Congress.

*Tchotchkes: Yiddish for baubles, trinkets, etc. The title is a parody of a famous parody of the old style of TIME magazine). 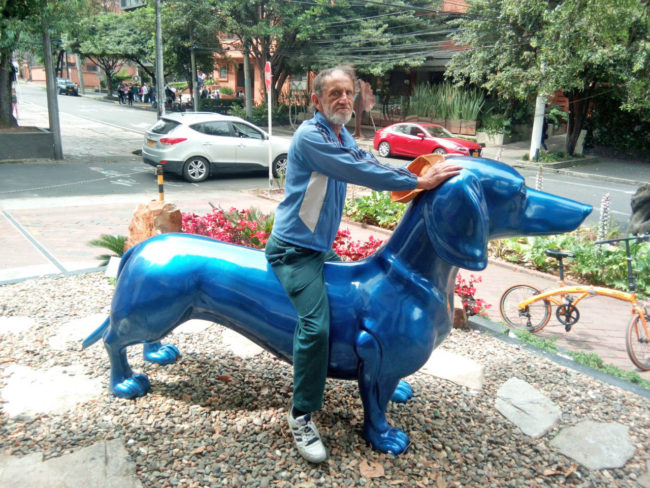