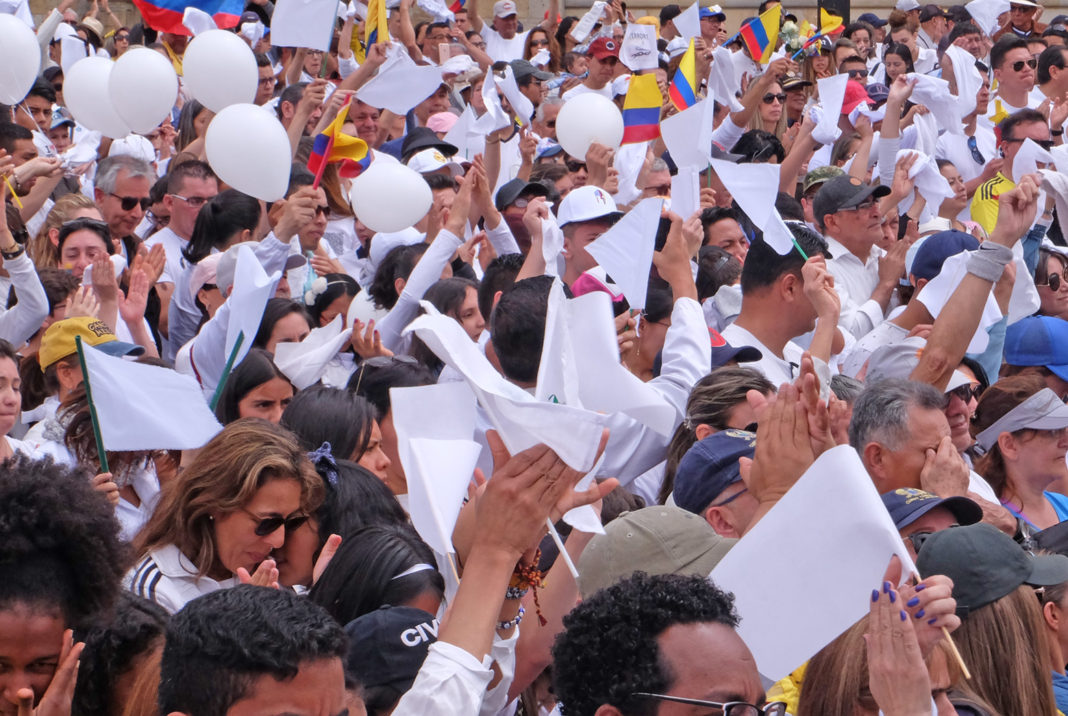 You’ve probably wondering what all the hype is about with JEP, and the institutional crisis taking hold of Colombia. Let us explain it in easy speak:

Back in 2016, the representatives of Colombia’s largest guerrilla group, Revolutionary Armed Forces of Colombia (FARC), sat around a table in Havana, Cuba, to see how they could hand over their weapons to the Colombian government and forge a lasting peace. FARC had been shooting up the Colombian countryside for a very long time – more than a half-century in fact – and responsible for some horrendous crimes. The majority of Colombians knew that the guerrilla had turned rogue, and if FARC didn’t sign the deal, they would be wiped off the map by the Army in a few years. The President at the time, Juan Manuel Santos, really wanted to go down in history as the man who sealed the peace, and as his time in office was running out, a Nobel Peace Prize was on the cards.

FARC said that if they were going to hand over their 8,000 weapons, they also wanted guarantees from a court that would hear them out, and let them get on with their lives as newly incorporated civilians. The guerrilla also felt that even though they had kidnapped, strapped bombs to donkeys and blown up villages they were “special” for being the world’s oldest Marxist revolutionaries, and therefore, weren’t going to be tried in ordinary courts. So, President Santos and the FARC’s peace negotiators agreed upon JEP – Special Jurisdiction for Peace – a parallel legal system and tribunal dedicated to resolving cases involving former combatants.

It gets complicated, so read on.

FARC’s peace negotiators didn’t want to be labeled “drug traffickers” because they felt that what they were doing in the countryside was protecting coca farmers from other “bad guys” – the Army and National Police – who would swoop-in with their helicopter gunships and fumigate legitimate crops with a Round-Up concentrate, killing in the process, lots of biodiversity. The peace teams on both sides agreed that the coca plant needed to the routed-out manually, and as FARC knew where most of the plantations in the county were (remember they were protecting them with Russian rifles), the rebels pledged to help clear Colombia of landmines and the plant used for cocaine.

When the peace process was finally signed in 2016, FARC’s senior commanders morphed from “bad guys” into almost “good guys,” and even though a majority Colombians didn’t approve the deal (51% in an October peace plebiscite), they were willing to give FARC 10 seats in Congress as representatives of their newly formed political party, and with an original name: FARC. This caused plenty of confusion and outrage among Colombians because, for decades, they had seen these “narco-terrorists” brandishing heavy artillery from behind redhead scarfs – when all of sudden – they were sitting in tweed, and tweeting before microphones.

This brings us to alias “Jesús Santrich,” (real name Seuxis Paucias Hernández Solarte), who commandeered one of the largest fronts within FARC – Southern Bloc – and which operated in the south of the country where much of the coca is harvested. Blind since birth, the enigmatic “Santrich” quickly proved his skill at communicating with the media, and became one of FARC’s main spokespersons in topics relating to the implementation of the peace process and protection of demobilized combatants in the post-conflict.

Almost on t.v. every night with dark glasses and draped in his Intifada scarf, Santrich staunchly defended the accord, while other comrades joined a growing number of FARC dissent groups. His tone was often patronizing, charged with cynicism, especially when asked if he would ask for forgiveness from the Colombian people for crimes committed, saying on one occasion: “Quizá, quizá, quizá” (maybe, maybe, maybe.)

Then, a news story broke last year that implicated Santrich in a DEA wire-tapping, in 2017, for allegedly brokering a deal with the Sinaloa drugs cartel in which he would get US$10 million for a 10-ton shipment of cocaine, worth US$340 million on the street.

The country’s top law enforcement official, Chief Prosecutor Nestor Humberto Martínez, was presented with evidence that “Santrich, the peacemaker,” was “Santrich, the drug trafficker,” and an arrest order followed. Because Santrich was trying to send cocaine stateside –  just six months after the Final Accord was signed – he couldn’t, in theory, be protected by the JEP magistrates in their grey togas.

The U.S really wanted Santrich to stand trial in a New York court for trying to send drugs there, and an extradition order was delivered to the Chief Prosecutor. Extradition orders are routine in Colombia ever since the days of Pablo Escobar. Escobar, however, was gunned down during a shoot-out in Medellín because he refused to be captured. In fact, the whole drug war story in Colombia comes down to this word – extradition. The narcs always reminded Colombians by planting car bombs that they “preferred a tomb in Colombia, to a cell in the U.S.”

But after Escobar, the U.S Justice Department extradited many drug traffickers and Colombians seemed fine with this, handing-over those suspected of being implicated in a transnational crime that has caused so many deaths in their country. So, getting Santrich to New York seemed a shoo-in. Until yesterday.

JEP offered legal counsel to Santrich once the phone-tapping surfaced, a) for being a former senior commander, and b) as someone who defended, since Havana, the idea of “transitional justice.” According to FARC, transitional or “special” justice also had to include members of the country’s security forces accused of their own war crimes. In other words, if FARC were going to go to jail in Colombia for the terrible things they did, so too, members of the Army and National Police: erasing any difference between being a “narco terrorist” and a patriot. The U.S still lists FARC as a terrorist organization.

FARC has been vocal about confessing to JEP the things they did as a guerrilla, as long as they are tried on familiar turf. So, when Santrich denied any involvement in the DEA drug sting, he got legal protection from JEP.  After a year under house arrest, JEP – on Wednesday – took a decision, a momentous one, to over-rule the U.S extradition order and formalize the release of Santrich. This move was a direct challenge to the independence and authority of the Chief Prosecutor’s Office. JEP claimed the evidence against the former commander is inconclusive. Nestor Humberto Martínez resigned in protest.

This is big news for Colombia because, for the first time since an extradition treaty was signed with the U.S in 1979, a special court has shaken one of the pillars of sensitive bilateral cooperation.

Another sticking point in the Santrich case is JEP’s capacity to order the release of someone charged for involvement in a transnational crime, which falls under the jurisdiction of the ordinary legal system.

For critics of the JEP ruling, Santrich’s release shows a pro-guerilla bias of the magistrates and dangerous precedent for future cases when former combatants are involved in illicit activities. For JEP’s advocates, Santrich is a demobilized fighter with constitutional rights, innocent until proven otherwise, despite more conclusive evidence that may fall into the hands of the Chief Prosecutor.

Just weeks after the U.S Government revoked the visas of several of the country’s top magistrates on grounds of corruption, JEP’s Santrich decision is being celebrated by left-wing politicians as a victory of Colombia’s constitutional autonomy, based on hard evidence, and not a petition from a foreign government.

The decision, however, also reveals the deep polarization that exists within Colombian society over a peace accord that three years after it was signed has hardly consolidated peace. For those on the right of the political spectrum, Colombia now looks into the abyss of illegality.

As two courts face-off over who represents the rule of law, the power struggle has the potential to implode Colombia’s judicial system, taking with it, the rights of those who most need defending: the victims of the internal conflict.