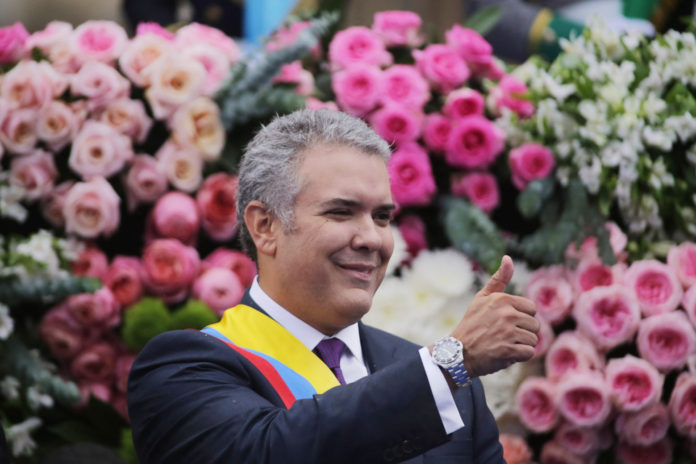 Just moments after taking the oath of office as Colombia’s 60th President, Iván Duque addressed a crowd of 3,000 dignitaries assembled in the Plaza de Bolívar when a windstorm bore down on the capital. As police scrambled to provide umbrellas for former presidents, visiting heads of state and government representatives, the 42-year old Duque, one of the youngest presidents in the country’s history, delivered a 52-minute speech in which he highlighted his policy objectives for the next four years as a “Grand Pact for the Future.”

As the audience shielded themselves from drizzle and pounding wind, Duque’s opening statement immediately heralded an important shift in the style of leadership from former presidents. “Today, a new generation comes to the Presidency of Colombia, motivated by service and not by the vain exercise of power, committed to the future, and without anchors and prejudices in the past, inspired by social justice and security as the foundation of our freedoms,” remarked Duque, in an inauguration  marked by another first: the swearing in of Marta Lucía Ramírez, as Colombia’s first woman vice-President.

The speech was conciliatory, looking toward a future beyond political grudges and division, yet without deviating from his original campaign platform on issues that so far have polarized the country to its core, such as the Peace Accord signed with FARC during the administration of Juan Manuel Santos.

Contrasting the incendiary and partisan speech by the president of Congress Enrique Macías, and member of the same political party, Centro Democrático, Duque stressed the importance of nation-building as this country reaches its Bicentennary. “I want to govern Colombia with unbreakable values and principles, overcoming divisions of the left and right, overcoming with the populist dialogue and double-sentiment that invites for social fracture.”

Taking office on the 199th anniversary of the Battle of Boyacá that gave Colombia independence from Spain, Duque recalled the objectives of the founding fathers of the Republic to “set aside their egos and forge a common purpose.” He also emphasized his pro-business stance, saying: “We have been able to build a vigorous and productive apparatus in the middle of three mountain ranges […] to become a thriving economy the world recognizes and earns the respect of the investment community.”

Regarding the immediate challenges Colombia faces is a spike in coca production and the killing of more than 300 human rights activists during the last two years. The growth in illegal cash crops has also given criminal gangs more territorial control. Duque recognized and promised to secure financing to protect civil leaders. In a direct reference to the outgoing administration of Juan Manuel Santos, Duque said that the “disorganized creation of agencies and programs has increased distrust and frustration by the beneficiaries of initiatives, including the victims and regions hit by violence.”

He also claimed that the economic policy of his predecessor was a “serious mistake” when trying to exchange low oil revenues for higher taxes. “This was an unforgivable mistake that has impacted the pocket of consumers and homes.” The president remarked that his administration will “guarantee” economic growth above 4%. “We are going to invest in the creative industries – The Orange Economy. We are going to invest so that this country has the possibility of seeing technological entrepreneurs as new protagonists of the country’s progress,” said Duque.

There were no references to FARC and few to the peace process that was signed into effect in November 2016, despite a majority of voters rejecting the Final Accord in a nationwide plebiscite. However, Duque announced that he would present a Constitutional reform that “neither drug trafficking nor kidnapping will be recognized as a crime related to the exercise of politics.” He also extended guarantees for the protection of the demobilized guerrilla, recognizing that many were forcibly recruited and separated from their families by “the intimidation of weapons.”

The president stressed the importance of respecting the “citizens mandate” he has been given so that “corrective measures” will assure victims receive the truth they deserve, as well as proportional justice and effective reparations. “The victims of Colombia must expect that there will be true moral reparation, material reparation, economic compensation by their victimizers, and that they will never, never, be attacked by impunity.” He also promised that during his government, a “culture of a legality will be based on the essential premise that security and justice go hand in hand.”

He also stressed the importance of consensus and social cohesion when dealing with the challenges of the future.”It is not about thinking the same, it is not about uniformity, it is not about avoiding the healthy discrepancies that are proper to a democracy. It is about being able to give life to a consensus,” he remarked with his back turned to a wall of flowers.

Regarding the on-going peace talks with the country’s last remaining guerrilla, the National Liberation Army, known by its acronym ELN, Duque was emphatic: “I want to make absolutely clear, that a credible process must be based on the total cessation of criminal actions, with strict international supervision, and defined times. We want to move forward, but in order to move forward we must leave the impression that the Colombian people will not be intimidated by violence in any way.”

Then a push for unity and national pride:

Duque made it very clear that fighting organized crime will be a top priority for his administration in order to restore law and security in regions where FARC “dissidents” and the so-called Clan del Golfo control lucrative drug trafficking routes. “We are not going to allow “dissidents”, “combos”, “clans” and the so-called “offices” to continue doing theirs on the Pacific Coast, on our borders and nowhere in our territory,” he said.

“You can be sure that as Commander in Chief of the Armed Forces and in collaboration with judicial authorities, we will act to dismantle these organized crime networks and bring them before the courts, enforcing this principle that he who commits, pays.”

The energetic President also thanked those ountries that have helped Colombia in the fight against drug-trafficking especially with  support from the United States “to be effective in the defeat of transnational crime.”

And then, one final appeal to all colors of the political spectrum, before the sky darkened and the gusts intensified, downing tress across the Colombia capital. “When we are united, nothing can stop us.”