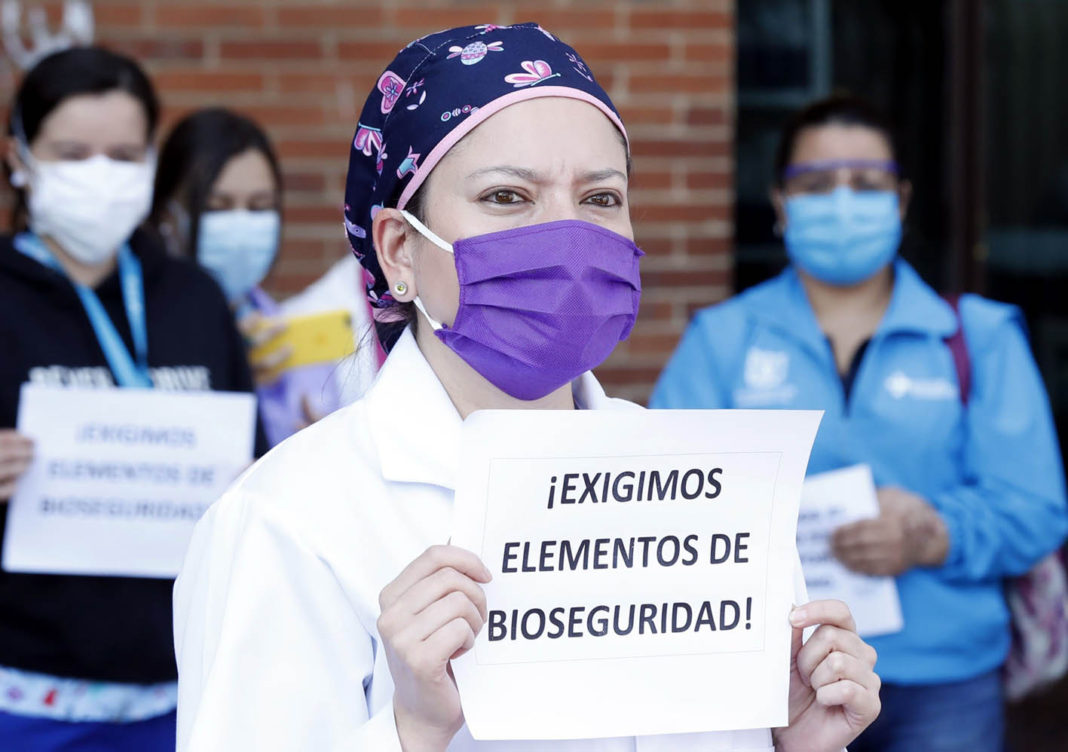 A plastic surgeon in Bogotá who had finished client appointments and was returning home Thursday morning was attacked by Colombian and Venezuelan protesters at a roadblock on Carrera 7 with Calle 174. Identified as a medical professional given blue overalls, several men smashed his car with sticks rocks before proceeding to beat him. According to Iván Santos, who was with his wife at the time, taped a video message depicting damage to his SUV and denouncing that the “Venezuelan protestors are shouting that they do not respect Colombian law,” as the country continues under quarantine with coronavirus.

Doctors and nurses across Colombia have stated to the media that they face discrimination and verbal abuse in public transport from passengers who falsely believe they are carriers of COVID-19. Several healthcare workers staged peaceful protests outside Bogotá hospitals demanding more PPE, safer working conditions and held signs stating: “Dignity to Doctors” and “How many more deaths?”

Despite the easing of certain restrictions in Bogotá as the lockdown completes 5 weeks, allowing residents to exercise outdoors from 6:00 am to 10:00 regardless of gender, police are tightening controls to enforce the National Health Emergency given more vehicular traffic on roads. On Thursday, Bogotá’s Government Secretary Luis Ernesto Gómez appeared to imply that the district is in no hurry to let businesses reopen before the end of the year taking to Twitter with the announcement of the city’s Development Plan: “This first year is to take care of ourselves and protect that which is most valuable to us: our health. As of next year, we will recover with an accelerated plan for economic reactivation.”

These words, once again, seem to contradict those of President Iván Duque who began relaxing the lockdown for the construction and manufacturing sectors this week and presided over a meeting with Mayor Claudia López on Wednesday in which the Presidency stressed the need “to work hand in hand with the Mayoralty […] to responsibly recuperate the country’s productive life.”

Addressing Colombians every night on television and having ordered a strict nationwide quarantine as the county faced its first cases of coronavirus, President Iván Duque’s approval ratings went up to 52% for his handling of the health emergency according to the most recent Invamer/Gallup poll. This is the first time since Duque was sworn into office on January 1, 2019, that his ratings surpassed 50%.

On Thursday, 296 new cases of coronavirus were confirmed in the country by the Ministry of Health raising the total to 6507, as well as 15 additional fatalities putting the toll at 293. According to the National Institute of Health, 4504 COVID-19 tests were processed. Bogotá saw an increase of 90 new cases putting the capital’s total at 2633. The department of Valle del Cauca registers the second-highest number of coronavirus in the country with 945 followed by Antioquia with 472. According to the Ministry of Health, 1439 patients have recovered.