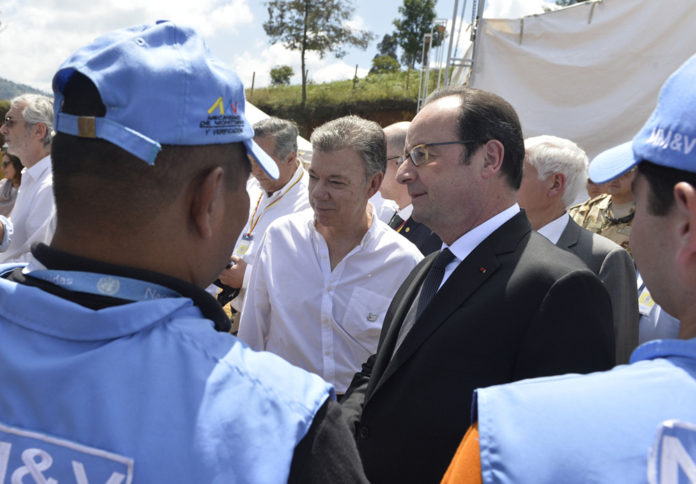 French president François Hollande visited a guerrilla demobilization camp in Cauca on Tuesday that will house members of the Revolutionary Armed Forces of Colombia (FARC) as the rebels prepare to hand over their weapons, reintegrate into society, and form a political party.

Hollande, who was accompanied by president Juan Manuel Santos, met victims of the armed conflict and members of the FARC. The visit marked the first time that a foreign head of state has visited one of Colombia’s 26 demobilization camps.

“What has been achieved with this peace deal is as much a victory for Colombia… as it is an example for the rest of the world, because this result shows that conflicts can be solved with negotiation, dialogue, perseverance, (and) vision,” Hollande said.

The historic visit, which aimed to reaffirm France’s support for Colombia’s post-conflict phase and boost tourism and investment between the two countries, has drawn condemnation from opponents of the peace accord, who dispute the French president’s “commitment to fighting terrorism.”

The criticism has underscored the continued political polarization in Colombia over the peace process with the FARC. And detractors of the accord, led by senator and former president Alvaro Uribe and his bloc of sympathizers, have been pugnacious in their efforts to discredit and undermine the agreements, calling the accord a “ruse” and an “amnesty.”

Uribe stoked tensions on January 8 after lashing out at the French president on Twitter, comparing the FARC to the Islamic State, a jihadist terror group that has carried out several deadly attacks in France since 2013, including a 2015 attack in Paris that killed 137 people and wounded 368.

“News from Europe: Hollande, French President who has been incapable of addressing jihadist terrorism, visits a Colombia handed over to the FARC,” Uribe said.

Uribe’s comments prompted a response from the French ambassador to Colombia, Jean-Marc Laforêt, who said the former president “has a lack of information on what France does against terrorism,” citing France’s counterterror operations in Syria, Iraq, and Mali.

“I don’t have to answer to a senator,” Laforêt said.

“I would like for Colombia to commit to peace, but the fact that an ex-president has taken a leading role in criticizing, sometimes out of line and on topics that are not in the peace agreements, seems like a shame to me,” Coronado said.

“France has supported, like few countries, the great effort that Colombians have made to reach peace,” Santos said.

The FARC, for their part, welcomed Hollande’s visit.

“We are absolutely sure that this is going to serve to boost the implementation of the agreements,” said FARC spokesman Pablo Catatumbo, who received Ambassador Laforêt in January to plan logistics for Hollande’s arrival.

But despite Hollande’s support for the peace process, uncertainty looms as France prepares to hold presidential elections in April. The rise in popularity of far-right presidential candidate Marine Le Pen, who is currently locked in a statistical tie at the top of the polls, has particularly raised questions about whether the next French administration would continue its support for Colombia’s peace process after one of Le Pen’s top advisors, Eric Domard, lauded the victory of the campaign against the peace accord in October’s plebiscite.

“Congratulations to the Colombian people who refused to grant political legitimacy to a communist narco-terrorist organization,” Domard said on his Twitter account.

In December, Hollande, who has been plagued by deep unpopularity, announced he would not seek a second term after his approval rating tumbled to a paltry 12 percent in recent months, according to pollsters YouGov. Other opinion polls have put his approval rating between four and 13 percent.

Hollande’s unpopularity largely stems from being unable to make good on his campaign promise to reverse France’s chronic unemployment, which has hovered around 10 percent since the 2008 financial crisis. An uptick in terror attacks on French soil and an influx of refugees, many fleeing war in the Middle East, have further alienated the country.

It is unclear if Uribe will attempt to court favor with a potential Le Pen Administration as he did with the Trump Administration. In December, Uribe met with former New York City mayor Rudy Giuliani at Trump Hotel in Washington to rebuke the ratification of the revised peace deal. At the time, Giuliani was on a shortlist of candidates for U.S. Secretary of State. Trump later appointed the former mayor as his top cybersecurity advisor.

“They lost the plebiscite despite the advantages they had,” Uribe told local media in Washington after the meeting. “They didn’t introduce substantial modifications to the agreement… they rejected the ratification they had proposed and the substituted it with a proposition in Congress.”

However, Trump’s nominee for secretary of state, Rex Tillerson, said last week that he wanted to “review the details of Colombia’s recent peace agreement, and determine the extent to which the United States should continue to support it,” according to Latin America Goes Global.

Despite the uncertainty surrounding international support for the deal, U.N. observers, the Colombian government, and the FARC have started monitoring the demobilization areas. Santos has estimated nearly 7,500 FARC combatants and some 10,000 militia members will demobilize.

After four years of peace talks in Havana, the Colombian government signed a peace accord with the FARC in a highly-choreographed ceremony in Cartagena de Indias that 15 foreign heads of state attended. One week later, voters narrowly rejected the accord in a nationwide plebiscite. The two sides then signed revised peace accord in Bogota in November. The new accord was ratified by Congress six days later, ending a 52-year war that has killed 260,000 and displaced nearly 8 million.

The European Union provisionally removed the FARC from its terror list in September, suspending economic sanctions against the group. The EU has said the group’s removal could become permanent in March if the peace deal is successful.

Hollande is the third French president to visit Colombia after Gen. Charles de Gaulle in 1968 and President François Mitterand in 1989.

On Monday, Hollande and Santos attended a concert at Bogota’s Colón Theater in celebration of “Colombia-France Year,” a year-long bilateral cultural initiative that will include some 400 cultural, economic, and educational activities.

“We have France in our hearts,” Santos said.