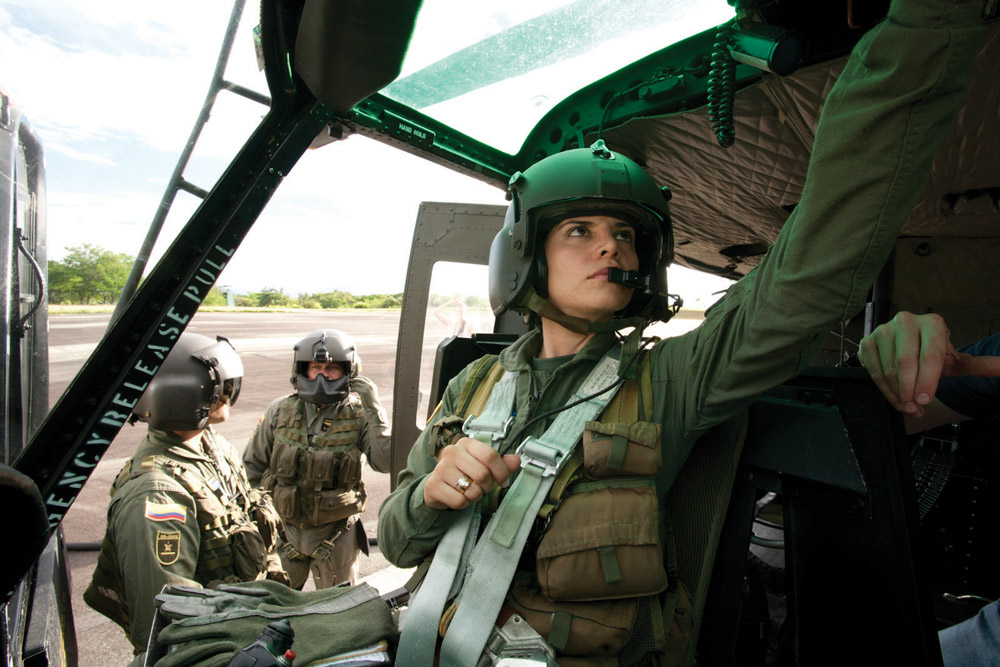 There was no time for pilot Erika Pedraza to think. She could see the blood soaking through her right glove as she gripped the controls and was aware of the sharp sting of a bullet. But she couldn’t feel the pain. Moments earlier her colleague’s helicopter had plunged deep into the Colombian jungle and now her own aircraft was hit. She had no choice. Erika tightened the grip of her injured hand and prepared to make the inevitable emergency landing in enemy territory.

Today Erika, 31, recalls the day she was shot in quiet, matter-of-fact terms. Dressed in a smart green uniform, she is a police officer, a mother-of-one and one of a handful of women quietly fighting one of the world’s longest-running guerrilla conflicts.

While young Colombian men face the draft, highly-trained women are battling a different enemy – the surprise and doubt they inspire as pilots in a nation where women are seen as homemakers rather than law enforcers.  “At one time I was the only Black Hawk pilot in the whole of Latin America,” Erika laughs, talking about an area that encompasses almost 600 million people – half of them women. “I went to the United States for a training course once. There are loads of women pilots there but they were still surprised to see me. Latin American culture is famous for being pretty chauvinist.”

It may be because several of the women have chosen a particularly risky role in their nation’s conflict. As police helicopter pilots they transport Colombia’s elite police commandoes to the frontline and, riskier still, dodge bullets to extract the officers who have been wounded by mines or gunfire or worse, those who have died fighting.

Extracting the bodies of your dead colleagues is a grim task, admits fellow pilot Kelly Garcia, 30, but she says it’s one ‘someone has to do’. “We can’t just leave them there,” she shrugs sadly. “But our work can be very gratifying. My family are the proudest people in the world of my job. My parents tell everyone their daughter is a helicopter pilot even though they don’t know too much about what I do. If they did, they would probably have a heart attack.”

And the women’s work does not stop at supporting the commandoes’ clashes with the guerrilla. They also play a frontline role in the war on drugs – escorting mostly US-funded crop spraying planes as they seek to destroy the cocaine farms. But whilst the peasants who farm those drug crops are generally unarmed and used to switching to other areas of land when their yields are targeted, the wholesalers are not relaxed.

Desperate to protect their laboratories, the guerrillas have been known to stretch wires between trees – snaring the planes in their deathly makeshift web. Because of this, some of the women claim their work in cocaine eradication is even more dangerous than supporting the troops who are making direct assaults on the rebels – particularly when the fields are too well protected to be sprayed from the air and must be eradicated on foot.

“I was taking food to troops in the mountains who were eradicating crops just last week,” says Kelly. “We always ride with two sniffer dogs because the crops are so well protected. When we were returning to the chopper one dog found a mine that blew both dogs up. It was really sad to lose the dogs but thank goodness it wasn’t a cop.”

The women work in 15-day stints, rotating between bases situated in the most dangerous areas of Colombia. While some of those stations have installed facilities for them, others are more basic – with all of the pilots thrown together to sleep and shower in giant metal containers.

Jimmy’s Walking Tour of Bogotá: At so many Tchotchkes* so reels...