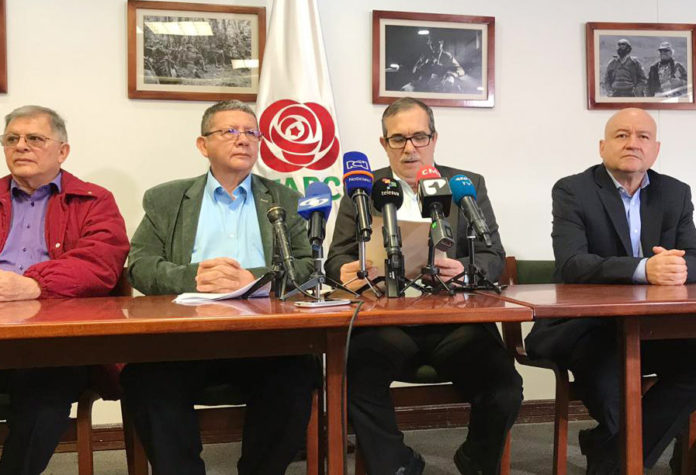 Rodrigo Londoño, former maximum commander of the Revolutionary Armed Forces of Colombia (FARC) guerrilla and head of FARC’s political party after the signing of the 2016 peace accord, released a strong-worded letter Wednesday in which he called on his organization to “mark distance” with Iván Marquez, the former chief peace negotiator.

Responding to comments by his ideological ally, in which Márquez affirms that having demobilized, and handed-over weapons as part of the Final Accord, was “a mistake,” Londoño remarked: “this is not about sitting down and regretting the days of the war, but to mobilize in order that all Colombians are aware of the meaning and scope of the agreement.”

Known to Colombians by his wartime alias, “Timochenko” went on to state that Márquez abandoned his responsibility with the newly-formed party that is gaining the trust of the country and international community. Iván Márquez was given one of 10 Congressional seats as part of the peace accord, but resigned and went into hiding last year along with another former rebel, Hernán Darío Velásquez (“El Paisa”).

Márquez is believed to be in a remote region of the country, near the Venezuelan border.

In a recent video, Márquez reiterated FARC’s “grave mistake” in having handed over some 7,700 weapons. “How naive we were to not remember the words of our Commander-in-chief Manuel Marulanda Vélez, when he warned us that weapons were the only guarantee for the compliance of the agreements.”

Political analysts are interpreting Timochenko’s four-page letter, emblazoned with the red rose logo of the Common Alternative Revolutionary Force, as a manifesto in which the party severs ties with the former Marxist guerrilla. “We cannot afford to lose what we have gained up to today, no matter how complicated the task ahead,” writes Londoño. “He left without any explanation, and refused to occupy his seat in Congress, leaving behind our parliamentary representation at the moment that most required his presence.”

Londoño’s words come at a time in which another senior FARC peace negotiator and long-standing member of FARC’s Secretariat Seauxis Paucias Hernández (alias “Santrich”) was rearrested last week by the Chief Prosecutor’s Office on drug-trafficking charges. Londoño has insisted on Santrich’s innocence, citing that the charges against the blind peace negotiator and congressional leader are part of a “mediatic lynching” in order to secure his extradition to the United States. After spending more than a year in a maximum security prison in Bogotá, Santrich’s immediate release was ordered by JEP, a special tribunal established with the peace accords to try war crimes committed by members of both FARC and Armed Forces.

Santrich’s release from La Picota was delayed several days, and when news surfaced that the negotiator had sustained injuries in a botched suicide attempt, he was rearrested at the gates of the prison by agents of the Fiscalía General de la Nación.

JEP also ordered an arrest warrant against “El Paisa” for being a fugitive of justice and his incompliance to give testimony before the peace tribunal.

In February, Londoño voluntarily attended JEP to give testimony before magistrates of his organization’s role with the kidnapping of civilians during the internal conflict. After the closed-door hearing, Londoño remarked that the  session was the first of many, as part of his commitment to “contribute to truth, for the reparation of the victims of the armed conflict.”