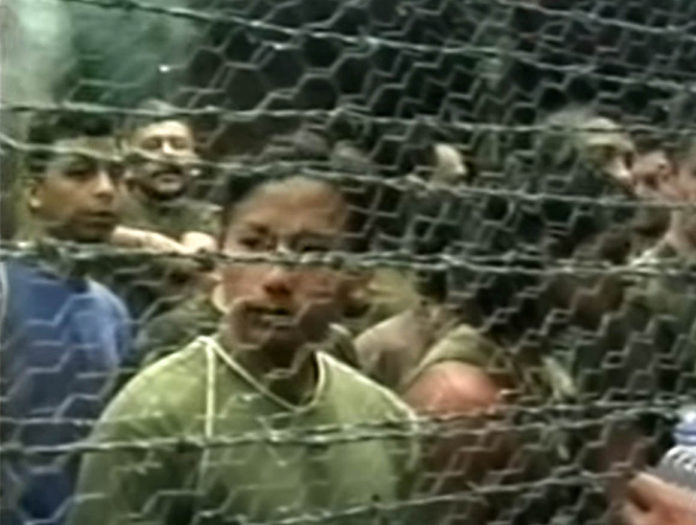 “There were no errors, but War Crimes and Crimes against Humanity,” remarked chief magistrate Eduardo Cifuentes of the Special Jurisdiction for Peace (JEP) after reading formal charges against eight demobilized commanders of former FARC (Revolutionary Armed Forces of Colombia). The 322-page indictment, four years after the signing of the Peace Accord with the Colombian Government, accusing the ex Secretariat of war crimes for kidnapping and crimes against humanity marks a watershed moment in recent Colombian history for justice, truth and victims reparations.

The representatives of the oldest Marxist insurgency in the world now have 30 days to acknowledge the formal charges or face up to 20 years in prison, given that “hostage taking” constitutes a war crime under Article 8 of the Rome Statute of the International Criminal Court.

According to evidence gathered by a court established in agreement with FARC during the peace negotiations in Havana, Cuba, FARC kidnapped 21,396 civilians during the last three decades of the internal armed conflict, the worst years for kidnapping in the country taking place between 1998 and 2001. These years coincide with the failed peace process between the conservative government of President Andrés Pastrana and FARC. The government authorized a demilitarized zone in the department of Caquetá to host the talks, but FARC’s founder, Manuel Marulanda – known by his nom du guerre “TiroFijo” – shunned the inauguration leaving President Pastrana sitting alone on an empty stage.

For a majority of Colombians who had never seen the face of the 69-year old guerrilla leader, nor those of his military henchmen and fearless kidnappers “Romaña” and “Mono Jojoy,” images were beamed every night into living rooms of South America’s most powerful outlaws brandishing heavy artillery and gloating as they marched through the fields of San Vicente del Cagúan. These images are in sharp contrast to those witnessed this week of FARC’s last strongmen, wearing face masks and voting on a name change for their political party.

Despite dropping four initials that for Colombians are indelibly associated with mass kidnappings, forced displacement and child soldier recruitment, the civilian-clad representatives of “Comunes” released a short written statement in which Rodrigo Londoño, Pablo Catatumbo, Pastor Alape, Julián Gallo, Jaime Parra and Rodrigo Granda expressed: “During our appearances, both individual and collective, before JEP related to the Case 001, we had the opportunity to contribute to the truth, contribute to clarifying the facts of kidnapping and satisfy the demands of victims. This behavior of ours will not change as our commitment to peace is steadfast.”

The fact that the co-signees use the word “kidnapping” in their communique rather than “forced detainment” or “prisoner exchange” shows their acknowledgement of the rules of conduct that govern conflict under the Geneva Convention, and hardly surprising, given that Londoño was a FARC ideologue with a Doctor of Medicine from Patrice Lumumba University in Moscow. On September 14, 2020, Londoño, in the name of former Secretariat, “asked for a public pardon from all our victims of kidnapping and their families.” The declaration was submitted to JEP and concludes: “We understand the pain we caused so many families – sons, daughters, fathers, mothers – who would everyday live through hell to hear news from loves ones.”

During the height of the kidnapping scourge – 1998 to 2001 – Colombia was the abduction capital of the world. FARC considered high-value “prisoners” to be policemen, soldiers, cattle ranchers, politicians and U.S Government officials. Foreigners and business leaders were also lucrative merchandise, many snatched from their apartments in Bogotá by intermediaries.

Among the high-profile hostages who spent six-years in FARC custody was presidential candidate Ingrid Betancourt. In 2012, FARC unilaterally released the last 10 abducted policemen and soldiers – some of whom spent 14 years in the jungle  –  and appear in a shocking video filmed inside barb-wire compounds that became known internationally as “FARC’s Cages of Infamy.” FARC never released numbers as to how many hostages they kept.

The revelation to the ex-Secretariat that no “error” justifies kidnapping 21,396 civilians during their time in the guerrilla, could be interpreted a legal blow to the peace process, yet according to JEP’s President Cifuentes, “if the country wants a stable peace, it has to be willing to know the truth and accept that telling the truth is an important gesture toward reconciliation.” The tragedy of Case 001, beside the shattered lives of victims who may never recover from trauma is the fact that many of the criminals behind FARC’s military apparatus never faced a court of law, killed in combat by the Armed Forces, including “Mono Jojoy” and Londoño’s predecessor Alfonso Cano.