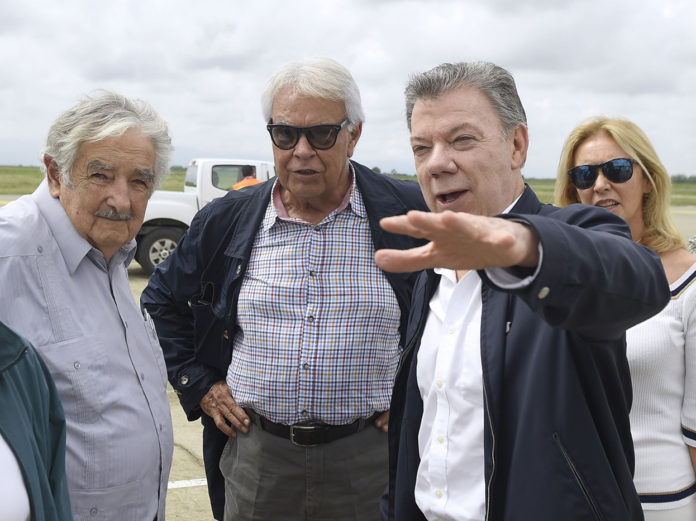 After two failed attempts to land at an airstrip near the town of Buenos Aires, in the department of Cauca, President Juan Manuel Santos had to preside over the handing-over of weapons ceremony Tuesday May 13, from a conference room.

Accompanied by the former presidents of Spain, Felipe González, and Uruguay’s José Mujica, Santos’ planned visit to La Elvira demobilization camp had to be cancelled due to bad weather affecting most of Colombia’s Pacific coast. But the hand-over of 2,400 weapons by guerrillas of the Revolutionary Armed Forces of Colombia (FARC) still went ahead as scheduled.

In a televised address to the nation from the Marco Fidel Súarez air force base near Cali, Valle del Cauca, Santos reaffirmed the commitments reached with the final peace accord six months ago. “After 53 years of fighting, we must continue to replace mistrust with confidence,” he said. The President then went on to accept that there have been delays in complying with original deadlines agreed upon with FARC for the demobilization of 7,000 combatants. “I recognize that we have been stumbling and have faced obstacles,” he said.

According to Jean Arnault, chief of the UN mission in Colombia, with this second hand-over to UN monitors, the weapons collected so far totals 4,000. “Today, we have made history,” said Santos. “This is a well thought-out, well designed accord.”

Until FARC signed the peace agreement with the Colombian government, the northern region of Cauca, was under control of Jorge Torres, known by his nom-de-guerre ‘Pablo Catatumbo’, commander of one of the guerrilla’s most active fronts, the Bloque Occidental. Among the guerrilla members active in the Western Front is Dutch national Tanja Nijmeijer, who joined the insurgency 10 years ago adopting the alias ‘Alexandra Nariño’.

On June 20, the FARC will relinquish the remaining 40% of their military arsenal.