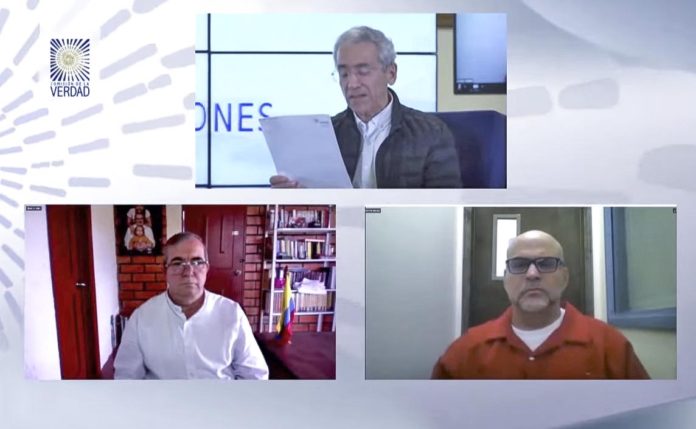 For many Colombians, the names “Timochenko” and “Mancuso,” are associated with the most violent episodes of the country’s half-century internal conflict, and one, that claimed the lives of 260,000 civilians. As commanders of two powerful armies, one a left-wing guerrilla, the other a paramilitary apparatus known as the United Self-Defense Forces of Colombia (AUC), the two men were also arch-enemies until their respective demobilizations. But their futures – not unlike their pasts – also took different turns, with Rodrigo Londoño of the Revolutionary Armed Forces of Colombia (FARC), walking a free man after securing a historic peace deal in 2016, while Salvatore Mancuso continues to serve a long prison sentence in a U.S Federal prison for drug trafficking.

On Thursday, however, the warlords crossed paths again, not on a battlefield but in the virtual realm of video conference before the Special Jurisdiction for Peace – JEP. Both Londoño and Mancuso expressed their willingness to contribute to the tribunal’s understanding of the context and motivation that resulted in human rights abuses. FARC’s Londoño, along with five other members of the guerrilla’s Secretariat, recently accepted a JEP ruling that they were responsible for War Crimes by mass kidnapping civilians and members of the military.

While ex-FARC leaders have been very much in the public eye during these last five years and are the representatives of the political party Comunes, when the AUC demobilized in 2005, many of the group’s top commanders, including Mancuso, were wanted in extradition to the U.S. Mancuso attended the video conference from a federal maximum security prison in Georgia where he is awaiting deportation to Colombia. Mancuso holds both Italian and Colombian citizenships.

When the AUC’s founder Carlos Castaño was murdered by his own security detail in 2004, the government of right-wing President Álvaro Uribe announced the start of peace negotiations. At the height of the internal conflict, AUC had 10,000 combatants as opposed to 21,000 in the rank-and-file of FARC.

The once arch-enemies requested the virtual meeting with Francisco de Roux director of the Truth Clarification Commission. Londoño again recognized that his organization committed crimes against humanity and war crimes. “We have come to this space with the sincere desire to contribute to the truth and therefore be able to reconcile,” he said. “It is far from me to call for applause for the horrific events that were witnessd in war.”

The meeting Thursday lays-out the framework for future discussions between ex-FARC and the AUC that formally begin April 21.

Mancuso also placed importance on the fact that the two were able to meet online and talk “in a civilized manner in order to respond to the victims for all the atrocities committed.” Dressed in orange prison fatigues, the former AUC commander warmly greeted Londoño and stated that as civilians they were no longer “mortal enemies.”

Francisco de Roux welcomed the frank dialogue and received the two commanders “with respect and hope.” The Jesuit priest went on to add that “Colombians want to know the truth of what happened from the very voices of those who participated in the armed conflict. This is not a forum to glorify your roles as protagonists of war, but to accept the great debt you have with society,” he said.